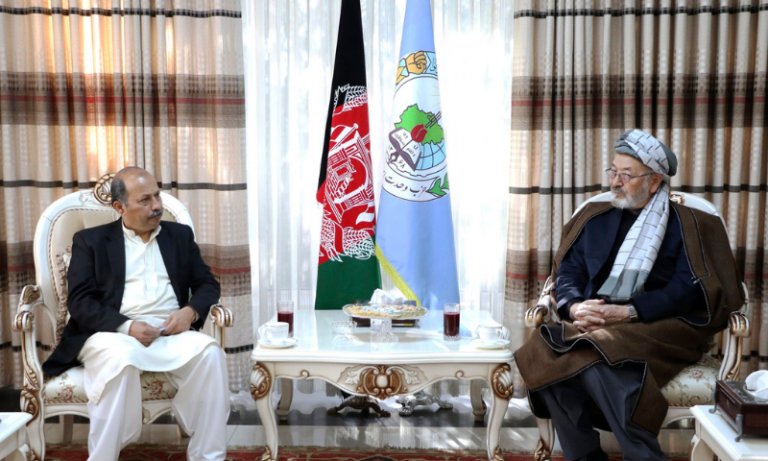 Mohammad Karim Khalili (on the right) meets Pakistan's Ambassador to Afghanistan Mansour Ahmed Khan at his residence in Kabul
KabulNow·January 11, 2021

Pakistan has a key role in Afghan peace. The country shares a long border with Afghanistan. Last year, as the Afghan peace talks started in Doha, Qatar, on September 12, Pakistan’s foreign minister virtually attended the opening ceremony of Afghan talks, saying that his country would support an enduring peace and stability in Afghanistan.

“The visit of Ustad Karim Khalili is part of Pakistan’s ongoing policy to reach out to political leadership in Afghanistan to forge common understanding on the Afghan peace process and deepen people-to-people linkages,” the statement said.

Khalili’s visit of Pakistan comes at a time when the second round of peace talks is underway in Doha.

Ever since the beginning of intra-Afghan talks, several Afghan leaders have visited Pakistan to discuss progress in peace talks and future relation between the two countries. In November last year, Imran Khan too visited Kabul. Mr. Khan held meetings with Afghan officials. He said Pakistan would support Afghan peace process.