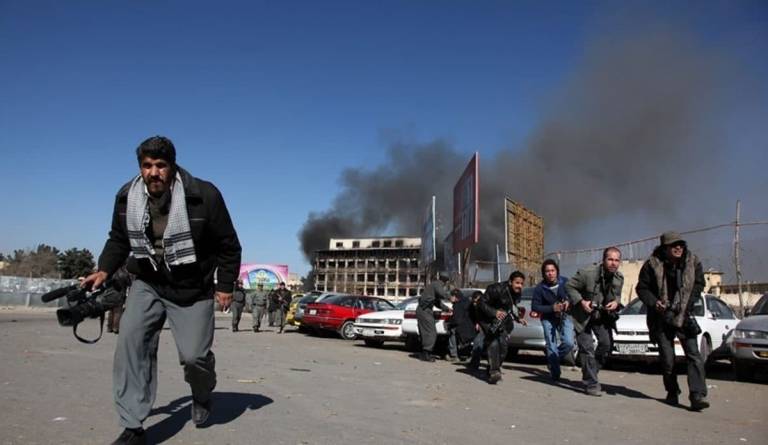 Speaking at a press conference held on January 02, in Kabul, Mohammad Taher Zuhair, the acting minister for the Ministry of Information and Culture, warned that freedom of expression was at risk as a growing violence and sporadic targeted killings were threatening lives and work spaces of journalists in the country.

Safety of media and journalists should be a priority of peace agenda for the Afghan government and the State Ministry for Peace, Zuhair said. He noted the Afghan ministry of foreign affairs has sent an official letter to European Union (EU) and UNAMA, asking them to exert their leverages on the militant groups and pressure them to stop violence against journalists.

Over last year, as many as nine media workers were killed. The first day of 2021 marked with violence against journalists.  On Friday, January 01, gunmen shot dead Besmillah Adil Aimaq, the head of Seda-e-Ghor radio. Earlier last year, on December 21, unknown gunmen killed Rahmatullah Nekzad, head of journalists’ union in Ghazni. Nekzad was contributing with Al Jazeera channel and the Associated Press in Ghazni province. On November 07, Yama Siawash, a well-known former TV anchor, was killed after a bomb attached to his office vehicle went off. On November 12, Elyas Daie, a local journalist, was killed in a similar blast in Lashkargah, capital city of the southern Helmand province. On December 10, Malalai Maiwand, a female presenter of a private radio-television network, was assassinated while heading to her office in Jalalabad, capital city of the eastern Nangarhar province.

As many as 19 media workers were wounded in multiple attacks across the country.

AFJC calls on judicial and security institutions to launch a transparent probe on cases of violence against journalists.

AFJC has also registered 45 cases of threats against journalists over last year, including 11 cases of physical violence, six arrests, six kidnappings, and four armed attacks on journalists and the media workers. According to the center, the Islamic State (IS) and the Taliban militants along with unknown group of armed men are behind violence against journalists.

In a joint news conference held on September 28, the Ministry of Interior Affairs and Attorney General’s Office reported that as many as 132 journalists were murdered during the past 19 years in Afghanistan.

Last week, Afghanistan National Directorate of Security (NDS), the country’s intelligence agency, claimed that two culprits were arrested in connection with targeted killing of Nekzad. The perpetrators confessed that they were tasked by the Taliban to target the journalist, the NDS said.

The Taliban, however, denied involvement in deadly attack on Rahmatullah Nekzad.

Even with a peace talks between the government and the Taliban hobble in Doha, targeted killing of journalists and rights activist has intensified across Afghanistan, a country, which according to Reporters Without Borders, is one of the world’s deadliest for journalists.

For the first time in 19 years, the Afghan peace negotiators sat face to face with a Taliban delegation in Doha, Qatar, on September 12, 2020. It took months until the two sides agreed on principle and terms of reference (TOR) for a substantive talks—the second round of talks which will take place on January 05 in the Qatari capital.