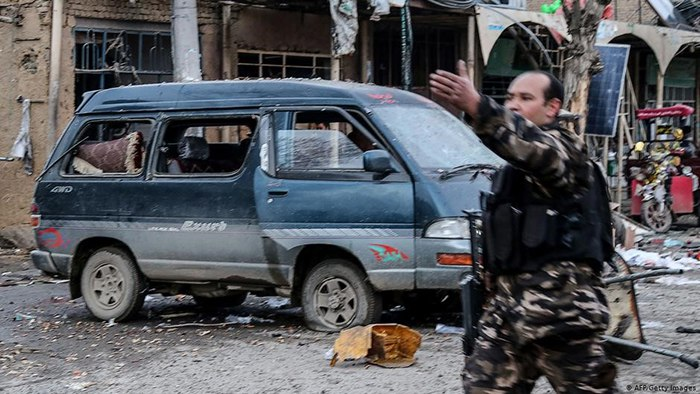 “Kill and deny” strategy; Taliban are behind most deadly attacks

A surge in target killing of high profile figures and government officials intensifies since the US and the Taliban peace deal signed on February 29. No American soldier has been killed ever since the February US-Taliban agreement whereas a deadly violence continue to claim Afghan lives. In most recent case of target killing, unknown gunmen killed Yosuf Rashid, the executive director of Free and Fair Election Forum of Afghanistan (FEFA) on December 22, in the capital Kabul. As many as four journalists were shot dead in just two months.

The Afghan security and intelligence officials blame the Taliban for deadly complex attacks across the country whereas the militants deny responsibility. The National Directorate of Security (NDS) says that the Taliban have adapted a “kill and deny” strategy since the Doha peace deal. “The Taliban terrorist group, under the instruction of Quetta Shura, launch terror attacks in crowed areas and deny responsibility for the attacks,” the NDS claims.

On November 29, as many as 30 people were killed and 24 others wounded in a car bomb that targeted an army base in Dehyak district of the southern Ghazni province. Though the Taliban remained tightlipped regarding the deadly attack against the military base, a local security force, who talked to Kabul Now, blamed the militant group for the attack. The source, who spoke on condition of anonymity, said that the attack was carried out with a Humvee type military vehicle which was previously confiscated by the Taliban. He went further to identify the Taliban commander who plotted the attack as Niazi.

The Taliban have officially denied involvement in many deadly attacks in the capital Kabul and in most recent case in the peaceful central province of Bamyan. The militant group denied responsibility for deadly attacks on education centers including attacks on Kabul University, Kawsar-e-Danish tuition center and maternity hospital in the western neighborhood of Kabul and targeted killings of journalists in Kabul, Helmand and Ghazni province.

Though the Islamic State Khurasan Province claimed responsibility for some of these attacks, the government blamed the Haqqani Network – the lethal arm of the Taliban, for attacks.

Sticky or magnetic bomb is a device which is used in target killings conducted against high-profile pro-government figures, journalists and politicians.  “The magnetic bombs have deterred the enemy. We have a very simple demand: accept the Islamic system,” Qari Saeed Khosti, who is followed by 90,000 people and appears to be a Taliban sympathizer, wrote on twitter in late November.

They kill and deny

Some experts say that the Taliban are behind most deadly attacks which claim innocent lives in Afghanistan, something the Taliban refuse.

Aref Rahmani, who represents Ghazni province in the Parliament, believes that the Taliban deny involvement in some attacks for these attacks are so deadly and embarrassing. “The Taliban terrorists shed the blood of civilians and military personnel on daily basis,” he asserted. MP Rahmani says that the Taliban deny responsibility for deadly attacks conducted by the group, aiming to play a double game and send a signal to the Americans that they are not in offensive position.

Latif Arash, a university lecturer, is of the opinion that the Taliban are behind most targeted killings and deadly attacks but the group deny responsibility. The US-Taliban peace deal, Mr. Arash says, binds the Taliban to reduction in violence but the Taliban continue to stage attacks, aiming to put more pressure on the government and pro-government forces.

Atiqullah Amarkhel, a veteran army general, says that in consultation with Pakistanis, the Taliban conduct such attacks and deny responsibility. “The Taliban must deny for they have signed an agreement with the United States to reduce the violence and avoid attacking cities. If the Taliban claim responsibility for these attacks, the Americans are more likely to intervene.”

He says that the Taliban have resorted to killing and denial strategy for there are not a clear prospect about peace process. “It is not clear that what will happen to the ongoing peace talks. Different game are being played now,” he stated.

However, Sayed Akbar Agha, who is a former Taliban leader, believes that the Taliban have not resorted to denial policy. “Whatever the Taliban spokespersons say is true. When they say that the Taliban are not [behind] these attacks, then they are not.”