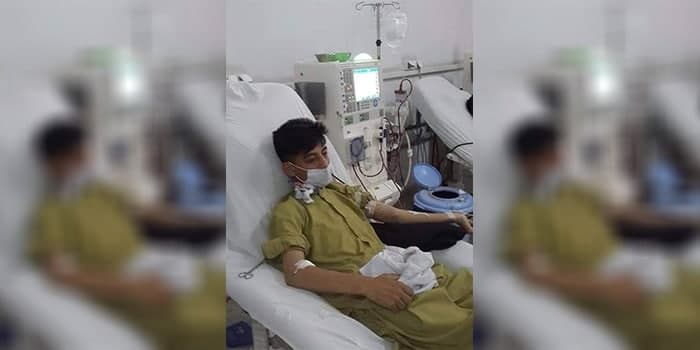 “I have thought about it for three months; losing one of my kidneys, I can no longer do heavy works, but instead, I will save a human life. I have no option but to sell my kidney in return for a specific amount,” said the 28-year-old Sami.

When he found himself caught between a rock and a hard place, Sami wrote on Facebook that he was ready to sell a kidney of him. Hours later he received an offer of 7,000 USD.

Yaser, is another person-in-need, who has decided to sell his kidney. Falling under debt, he said he had no way to pay his due but to sell his kidney. “I opened a factory to make Jalabi but due to high prices of [raw] materials and low prices of Jalabi, I fell under debt. I borrowed some money from a person, [and promised to pay back] in eight months, and [vowed] that I would sell my house if I could not pay his money back on time,” he said with deep anguish on his face.

A dragging bloody conflict has almost shattered market and economic substructure in Afghanistan. A growing unemployment coupled with insecurity force many reluctant Afghans to prefer bad choices over the worst one when it comes to question of survival.

In 2013, Yaser took a loan worth of 150,000 afghanis to cover the costs of his marriage party. To pay his loan back, every month, he had to pay 9,000 afghanis. Over the course of subsequent years, he has taken loans after loans to pay his due but in vain. “Currently, I have taken 60,000 afghanis as loans from bank, which I have to pay back 4,500 afghanis per month,” Yaser said.

Struggling with a heavy burden of financial hardship, Yaser took Facebook account of his brother and wrote that he would sell one of his kidneys. Though many days passed ever since he first posted on Facebook, only a customer has offered him 1,300,000 afghanis for his kidney.

The nearly forty years of war has inflicted a devastating damage on Afghan health infrastructure. Over the last decades, Afghans have suffered a lot and many Afghan families take their patients to neighboring Pakistan, Iran and India for treatment. Kidney diseases are a common but often a fatal disease in Afghanistan.

The 21-year-old Habibullah died of kidney disease a few months ago. Habib’s father, who is a daily wage worker, says that he spent 400,000 afghanis for treatment of his son. “We went to Pakistan for his treatment and spent a lot of money. We would take him to private hospitals once in a week and for each of doctor’s visit we would spend 1,800-2,500 afghanis. An injection of him would cost around 400 afghanis,” says the father. For transplanting a kidney, he needed at least 1,300,000 afghanis, an amount he could barely afford to pay for a kidney transplantation.

Dr. Mohammad Qasim Sahebi, head of hemodialysis and kidney treatment project at the MoPH, says that transplanting kidney is not an easy surgical procedure.  “Patient has to take medicines constantly. His first option before kidney transplanting would be to go through regular hemodialysis to be able to continue his activities,” says Dr. Qasem. Referring to the time-consuming process of hemodialysis, he says, “every kidney patient should be hemodialyzed in three sessions of 9 to 12 hours. It is a very tedious job. Blood is taken from the patient’s body, enters the device and re-enters the patient’s body after purification. This process takes three to four hours.” Hemodialysis therapy costs a lot of money in Afghanistan, according to Dr. Qasem.