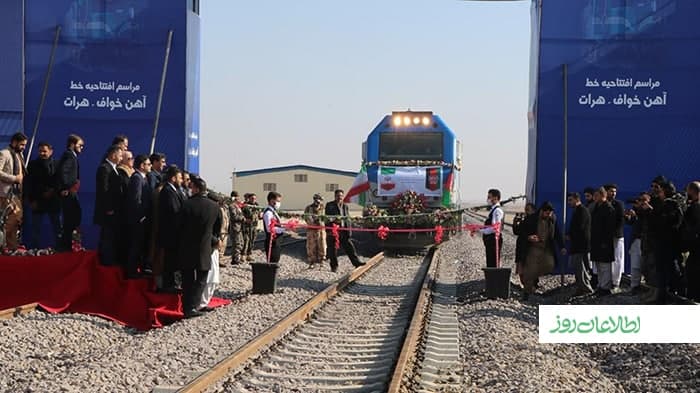 On December 10, Afghanistan and Iran inaugurated the first railway link between the eastern Iran city of Khaf and the western Afghan city of Herat. The two nations expressed hope that Khaf-Herat railway line would boost up trade ties among Afghanistan, Iran and regional countries.

Speaking at a virtual opening ceremony on Thursday, December 10, President Ashraf Ghani thanked his Iranian counterpart and the people of Iran for their cooperation. Ghani said that Herat-Khaf railway link will boost economic cooperation between the two nations. “I am glad to see opening of the historic project of Khaf-Herat railway which is the outcome of tireless efforts by people in Iran and Afghanistan,” President Ghani said in the virtual inauguration ceremony, held on December 10.

President Hassan Rohani, speaking at the ceremony, said the two nations share a long history of common culture. “Today is a historic day for the two great nations of Iran and Afghanistan,” he said.

The leaders of the two nations were expected to attend inauguration ceremony of Khaf-Herat railway line in the ancient Herat city, but due to Covid-19 outbreak, they inaugurated the first railway link in a virtual ceremony.

In 2016, the government of Iran took initiative to construct the line which connects the eastern Iranian city of Khaf to the western Afghan city of Herat. This railway connects the landlocked Afghanistan to its western neighbor Iran, providing the two countries with a crucial transport link. 140-kilometer of the 225-kilometer Khaf-Herat line has been built by the government of Iran and 85-kilometer of it has been constructed by the Afghan side, with assistance of the UK.

Mohammad Yama Shams, head of Afghanistan Railway Authority (ARA), said that the Italian government has donated more than 58 million USD for construction of the first part of fourth section, which is more than 40 kilometers, and it will be completed by late 2021.

Hamidullah Khadim, head of Herat Chamber of Commerce and Investment, told Kabul Now that a large amount of raw materials are supplied from Iran and Khaf-Herat railway provides a crucial transport line.

Mohammad Islami, the Iranian minister for Road and Urban Development, said that Khaf-Herat railway has capacity of transferring six million tons of cargo and one million passengers in a year.

“We hope to connect Rozanag to Herat city and [Herat] to Mazar-e-Sharif,” says President Rohani. According to him, Herat-Mazar-e-Sharif railway would boost up economic growth and connect Afghanistan to Persian Gulf, Indian Ocean and European market and connect Iran to Central Asian countries of Uzbekistan, Kyrgyzstan, Turkmenistan, and Tajikistan.

According to a study conducted by the Asian Development Bank, Afghanistan needs 2, 2,000,000 USD to construct at least 2,440 kilometers of railway lines, says President Ghani. Construction work of Aqina-Andkhoy railway line is underway, he added.

Afghanistan’s railway network is developing, as President Ghani says, a survey on Turghundi-Herat rail network is underway and it would also be completed soon. A developing plan on building 1,000-kilometer railway in Sherkhan port of Kunduz province to Balkh and Herat, 620-kilometer Herat-Kandahar railway, and a 400-km Kunduz, Baghlan, Parwan, Bamyan and Kabul, and Kabul-Turkham railway is underway.