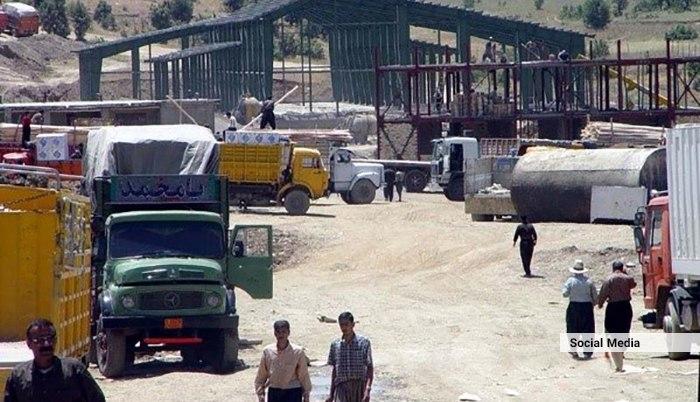 A large quantity of goods are trafficked from Iran to Afghanistan’s western provinces of Herat, Farah and Nimruz on daily basis, local sources tell Kabul Now. The sources say that most of goods from Iran are illegally traded to Afghanistan.

“Some Iranians in line with [a group of] mafia, armed opposition and some traders bring goods illegally into the country which harms the market badly. When border opens illegally, a large number of trucks loaded with goods enter the country [without being taxed],” he said.

Khair Mohammad Noorzai, a member of Farah Provincial Council, tells a similar story. Mr. Noorzai told Kabul Now that a large number of low-quality goods including oil are illegally imported from Iran and a group of trade mafia along with their Iranian stakeholders are running the business while local government is unable to stop this lucrative cross border illegal trade. “There are no customs charges and controlling on illegal import of low-quality merchandise.”

Accounts on illegal cross border trade between Afghanistan and Iran often draw media attention. In July 2020, in an exclusive story, Kabul Now brought out angry voices of customs staffs in Herat who had gone on strike, demanding the authorities to cut the hidden hands of trade mafia from customs offices and protect their lives.

The western Nimruz province of Afghanistan shares border with Iran and it is adjacent to Gumshad market in Sistan and Balochistan of Iran. Gumshad market which located in the adjacent of Lash Wa Juwayn district of Farah province is a market where trade mafia have a strong power.

Obaidullah Noorzai, chairperson of Nimruz Chamber of Commerce, told Kabul Now whenever the border opens at least 110 trucks loaded with an estimated 50 tons of goods enter the country while they are not allowed to carry more than 25 tons. “Gumshad market opens three times a week and trucks [loaded with goods] enter the country without being taxed.”

Though local authorities and officials of the Ministry of Finance have held several meetings to put an end to illegal trade, nothing has been done to stop illegal import of goods from Iran, says Mr. Noorzai.

Officials at Nimruz Chamber of Commerce, however, claim that Dost Mohammad Khan Bazaar in Nimruz border, a market from where most illegal trades are dealt, is shut since last six months.

Ahmad Saeed Azimian, deputy head of Herat Chamber of Commerce and Investment, claims Shindand border, known as illegal border of 78 miles, opens twice a week for illegal entry of trucks loaded with Iranian goods. Mr. Azimian says that several meetings were held with government officials but no concrete action has been taken, on the part of the government, to curb illegal trades across Afghan-Iran border. He says illegal trade is dismantling the legal market and the government would not be able to collect revenues if a tough action is not taken against trade mafia in the western part of the country.

Jelani Farhad, spokesman for Herat governor, says that no illegal activity is going on in the market and Herat governor has issued directives to relevant bodies to stop every illegal trade.

The finance ministry, however, acknowledges that illegal trades do exist cross border between Iran and Afghanistan and authorities at the MoF have raised the issue with Iran’s government through diplomatic channels.

Shamroz Khan Masjedi, spokesman for the Ministry of Finance, says that illegal trades are a matter of concern for Afghanistan. He says the MoF does not have any documented ratio on illegal trade. Mr. Masjedi says that Afghanistan’s security agencies need to take a tough action against illegal trade across Afghan-Iran border.

A rough figure by the MoF shows that there are more than 300 places in the country from where illegal goods are imported but it is not clear how many of these locations are in the western part of Afghanistan.

“The Ministry of Finance has cooperated with security agencies at all levels of markets and customs to prevent illegal activities,” says Mr. Masjedi.

Farah Provincial Council, local officials in Nimruz, and members of Herat Chamber of Commerce accuse that Afghan border forces have hands in illegal trade and they along with a handful of mafias are benefiting from this lucrative black trade.

But the Ministry of Defense (MoD) rejects the accusation.

Illegal trade is a milking cow for trade mafia, corrupt customs officials and security officers across Afghanistan-Iran border. Government leaders have repeatedly pledged that they would take tough action against circles of mafia and corruption in Afghanistan’s customs offices but little has been achieved in a real day-to-day war to diminish the monster of corruption which makes its way through easily penetrable government departments.