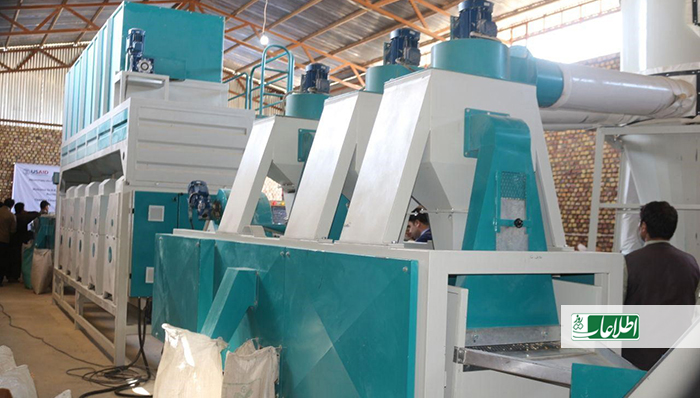 Funded by the Horticulture Value Chain Development Sector Project of the Ministry of Agriculture, Irrigation and Livestock, the first pistachio processing factory was established in Badghis
KabulNow·October 17, 2020

A pistachio processing factory has started operating in the western province of Badghis. A total of USD 157,500, funded by the Horticulture Value Chain Development Sector Project of the Ministry of Agriculture, Irrigation and Livestock (MAIL) and a trader, has been spent for construction of the factory. With this first ever processing factory, Badghis residents are expecting to have a hike in their income through pistachio products with better quality.

The factory has a capacity of processing 7,200 – 12,000 Kilo grams pistachios within 24 hours, according to Abdul Tawab Tayeeb, head of Badghis agriculture department. He added that value of the pistachio will increase by 150 afghanis per kilo grams and the processing waste will be reduced from 10 percent to one percent.

A great risk amid growing insecurity

Contrary to the widely and longtime practice of pistachio processing – processing pistachios with hammer and hand –, Abdul Baqi has invested more than USD 86,000 to process pistachio products through machine amid growing insecurity in the western province. “We open eight kilo grams of pistachio nuts in return for 100 afghanis with the machine. The pistachio nuts can cleaned and processed more safely with it. The waste is largely reduced. There are many people waiting to start opening their pistachio nuts,” says Abdul Baqi with enthusiasm to invest more.

He says that there is a capacity for putting five more pistachio processing machines in Badghis.

As per account of Badghis agriculture department, the pistachio forests have downsized to 30,000 hectares in the province from 90,000 hectares 50 years ago. According to the department’s head, the forests have produced around 36,458 metric tons of pistachios which includes 18,229 tons of dry pistachios. Pistachios produced in Badghis province is available in three forms: smiling nuts, closed shell pistachios, and empty pistachios. Of this year’s harvests, 13,627 metric tons are closed shell pistachios and 2,051 metric tons are smiling nuts. Each Kilogram of the smiling nuts is sold for up to 1,000 afghanis and each kilo gram of nuts are sold for 1,200 afghanis in Qala-e-Naw, capital city of Badghis province.

Mr. Tayeeb estimates the total value of the pistachio harvest to be more than USD 70 million and it will raise to more than USD 80 million if processed with machines.

Though Afghanistan’s pistachios have relatively a better quality that pistachios produced in the region, the outbreak of coronavirus has largely impacted pistachios exports of Afghanistan.

“India is the market for Afghanistan’s pistachios products. The demand for pistachios has unfortunately decreased in this market due to economic depression caused by the covid-19. The government’s efforts, however, is underway to export pistachios in regional markets and beyond,” says Hessamuddin Shams, Badghis governor.

According to Herat Chamber of Commerce and Investment, a total of 33 metric tons of pistachios worth USD 500,000 have been exported this year to Turkey and United Arabic Emirate from Herat.

A standardized process and packing is seemingly the trump card for Afghanistan pistachios in global markets. But nothing meaningful has been done so far to address the issue. With the start button kicked off in Badghis, the government and private sector are expected to invest more in providing further processing facilities for pistachios.

Badghis is encompassing a large region of Afghanistan’s pistachio forests and a substantial farmers of the province have started cultivating pistachio trees in recent years to bolster their income source.

Teimor Badghisi is one of these farmers who has allocated more than 200 jeribs of lands for cultivating pistachio trees. The farmer estimates making more than 10 million afghanis this year through collecting his pistachio harvests. “The government must support us in order to plant more pistachio trees. I need to receive professional training from government professionals in a bid to increase harvest of our [pistachio] gardens,” he asked the government.

A key factor that has encourage Badghis farmers to resort to planting more pistachio trees is the plant’s resistance and adoptability with lack of water – a phenomena that has hit the western Badghis in recent years. Noor Mohammad is another farmer who have 25 jeribs of lands planted with pistachio trees. He told Kabul Now that he has invested more than one million afghanis for growing pistachios. “We need more training in growing fertile pistachio gardens,” he said.

Head of agriculture of the province, Tayeeb, says that 1,000 hectares of land have been planted with pistachios trees in recent years, adding that the local government will not hesitate to support the farmers. “We train gardeners (farmers) of pistachio as much as we can afford,” he noted.

A key factor that has negatively impacted the harvest of pistachio in the province, as the local officials put it, is premature collection of the pistachios nuts. They accuse the local of carelessness in this regard, describing the people’s cooperation and care as key in persevering the pistachios forests.