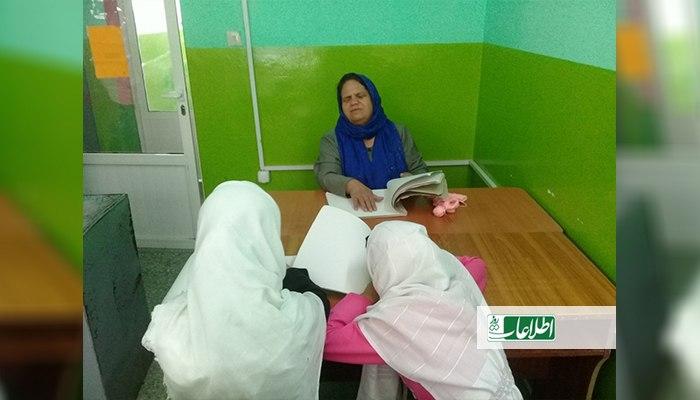 Masuma Saffari is a teacher in Kabul. She is blind and teaches at school for blind students
KabulNow·October 17, 2020

On the event of international World White Cane Safety day, a group of young Afghans with disabilities in Kabul call on public to see them as equal human beings.

October 15 is the World White Cane Safety Day. Every year on this day, federation of blind community launch awareness campaign about the white cane day.

The 19-year-old Bahara, who is student, has lost her vision at age seven. She says that it took her long to adjust with the situation and use her cane. Although it has not been easy for her, she manages to do her work and help her mother in housework. “I am not disable and people should know that like any other human being, I have my own abilities,” Bahara says confidently.

She has always dreamt to become a doctor in the future. “A number of people feel sorry for us, whereas some others make fun of us,” she complains.

Mohammad Dariush Stanekzai is another student who has lost his right hand and eye vision in an explosion on August 16, 2003, in Deh Mazang, Kabul. Dariush, who is in his twelfth grade, says that he was only 10 year old when his world turned to dark—lost his vision for ever.

Recalling the saddest misfortune of his life, she now recalls that for nearly a month, he would get fainted every time he was remembering the last moments of he could see the world. “I still cannot accept the horrible thing happened to me”. Stanekzai says that he had a dream to become a journalist and work at National Radio.

Mr. Dariush graduated high school at age 27 and now, thanks to technology, he uses an application which allows him to use WhatsApp, Facebook, and Telegram for communication.

In Afghanistan, however, some children are born blind as a result of interfamily marriages which are a common practice among Afghan tribes in rural areas,

Masuma Saffari, who is a teacher, was born blind in Herat and completed primary education there. Later Ms Saffari moved to Kabul where she started her career as a teacher at a school for blind students. According to her, blindness has not created many obstacles. She has married with her colleague whose vision is weak. The couple have given birth to five children—two girls and three boys. Their four children are suffering weakness in their visions but blindness has not hindered progress in their family. Saffari encourages families who have blind children to enroll them in educational institutions.

“There are many problems on the part of people and society. Just imagine a blind person in this situation who wants to cross a road,” says Mr. Dariush.

Shirina Tamil, head of students’ affairs, says that nearly 2,000 students—600 of whom are blind, 20 mentally disabled and rest are deaf, are studying at 16 schools in 16 provinces, including Kabul.

Currently more than 50 blind teachers with bachelors and masters’ degrees are teaching at these schools, according to her. “There are educational opportunities for disabled students at higher levels. This year, 25 blind and 35 deaf students participated at university entrance exam, Kankor,” she said.

Afghanistan is a poor country where people with disabilities are facing a number of challenges including public mistreatment.  Lack of infrastructure and proper transportation add to problems the blind community is facing in Afghanistan.