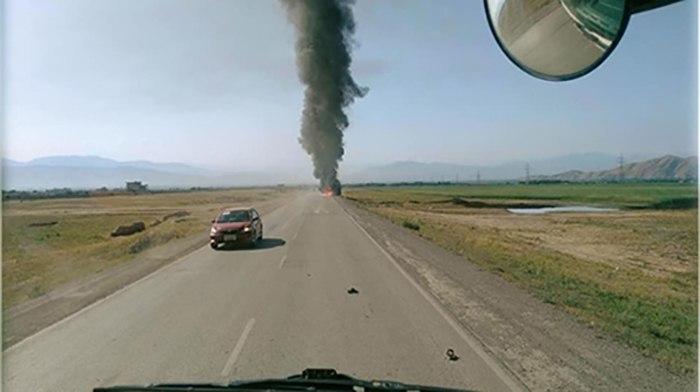 Chashma-e-Shir area in Dahana Ghori district of the northern Baghlan province remains one of the most insecure areas where the Taliban militants kidnap government staffs en route to their provinces or back to Kabul and extort money from truck drivers since last year, say local sources.

Chashma-e-Shir, a strategic location in Baghlan, has witnessed consistent clashes, bloodshed and casualties. In most recent case, a week ago, the Taliban fighters ambushed convoy of a former Provincial Council member, Mahbobullah Ghafari, killing 12 security guards of Mr. Ghafari while he narrowly escaped the attack.

Mahbubullah Ghaffari told Kabul Now that in a joint collusion with local officials the Taliban in Baghlan targeted his convoy.

“The distance between Sorkh Kotal and Chashma-e-Shir Bazaar is about almost 100 meters. At this distance, there are two Afghan National Army bases where 20 to 40 tanks are stationed,” claims Mr. Ghaffari.

A footage circulating on social media shows the last vehicle of a convoy of three is hit hard by roadside bomb followed by gunfire targeting vehicles accompanying Mr. Ghaffari.

The Taliban militants have set up check points in an area located between two Afghan National Army bases, extorting money from truck drivers in Chashma-e-Shir area, which according to former PC member, raises suspects and questions about Taliban control in the area. He claims that the Taliban, in collusion with some Afghan commanders, extort five and ten millions afghanis on daily basis.

Abdul Razaq Hashimi, an MP who represents Baghlan, also confirms that the Taliban militants extort money from truck drivers. Chasha-e-Shir is one of Taliban’s source of extortion and they extort almost 200,000 USD per day, he claims.

A source at Takhar Transportation Union, told Kabul Now that the Taliban extort an average of 14,000 afghanis from each truck passing through the route.

The Afghan defense ministry, however, makes a contradicting statement.

Fawad Aman, spokesperson for the Ministry of Defense, says that the Afghan security forces are on constant patrolling in the area and the insurgents do not maintain control over Chashma-e-Shir—have no checkpoint there.

The Afghan security forces launched a large-scale operation in Chashma-e-Shir and pushed the militants out of the area, says Mr. Aman.

Waisullah Samimi, police chief of Baghlan province, says that security situation has improved in the area. “Prior to Eid, we built three strong bases in Tank e Joma, Tajik, and Chashma-e-Shir areas,” says Mr. Samimi. Armed robbers often robe truck divers but the Afghan police force will not allow any group to destabilize the area, according to the police chief.

He, however, asks the government officials and military personnel to inform local police before their movement to the area.

“I contacted the police chief several times but he did not pick my calls. Finally, I received a message from Mr. Samimi’s secretary, saying that the routes were safe,” Mr. Ghafari claims, adding, “the police commander changed his way as we reached in Chashma-e-Shir where Taliban attack broke.”

In 2014, under an official agreement, the Afghan minister of border and tribal affairs, Gulab Mangal, handed over the strategic area of Dand-e-Ghori of Baghlan province to the Taliban. Under the agreement, security forces were not allowed to fight against the insurgents in the area, says Abul Razaq Hashimi, an MP who represents Baghlan. Though locals opposed the deal but the agreement was implemented, according to MP Hashimi.  The security situation in Baghlan worsened after the agreement was signed, he says.

Chasha-e-Shir which connects Dand-e- Ghori to Dand-e-Shahabuddin remains insecure and Taliban militants maintain their influence and control there.

Baghlan province is strategically important for the Taliban insurgency in the northern Afghanistan.

Nasim Mudaber, another MP who represents Baghlan, accuses the government—notably Office of the President—of having an ethnic-oriented approach towards Baghlan. “Explosion erupted a month ago in Samangan was masterminded from Dand-e- Ghori. Insecurities in Badakhshan, Kunduz, Takhar and Faryab are [linked] to Taliban in Dand-e-Ghori.”

MP Mudaber claims senior Pashtun politicians at the Office of President backed Taliban insurgency in Baghlan—assuming that Pashtuns in Baghlan were being sidelined by Hazaras and Tajiks. “No one listened to what we warned about consequences of signing the agreement.”

The agreement in Baghlan was signed between local elders and officials, says Gulab Mangal. Tribal elders had pledged not to allow Taliban to infiltrate into the area, according to Mr. Mangal.

Baghlan province, which connects north to south, remains insecure and Taliban fighters maintain control over some districts of the province.