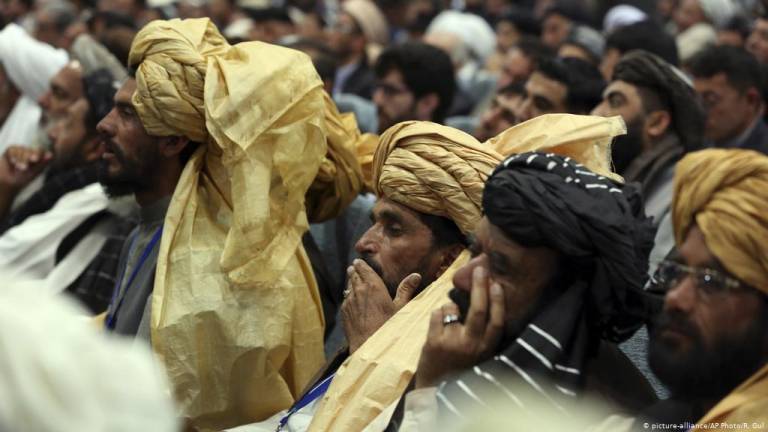 The Afghan government has convened a three-day Consultative Loya Jirga to debate future of peace talks with the Taliban. Afghan leaders including President Ashraf Ghani, Abul Rab Sayyaf, a prominent jihadi leader, and Massom Stanikzai, the head of commission for convening of Loya Jirga, will address the assembly. Abdullah Abdullah, the chairman of Afghan High Council for National Reconciliation, is expected to chair the assembly of nearly 3000 delegates who have come from Afghanistan’s 34 provinces. A number of Afghan MPs, Senators, and members of provincial councils, religious leaders and tribal elders are also on board of delegation in this Jirga.

What is on the agenda?

The three-day consultative Loya Jirga on future of peace process comes at a time when the country is preparing to begin peace talks with the Taliban insurgents. In this three day consultation assembly, the delegates will discuss the fate of 400 Taliban prisoners whom the Afghan government is reluctant to release for various reasons.

Under a peace agreement signed between Washington and the Taliban representatives in February, the Afghan government has to release an estimated 5,000 Taliban prisoners in return for 1,000 Afghan security forces held by the Taliban. The government has freed 4,917 Taliban prisoners including Anas Haqqani, a mastermind who was behind most complex attacks by Taliban’s Haqqani network.

But in August 02, President Ghani said that under Afghanistan Constitution he had “no authority” to release the remaining 400 Taliban prisoners who are involved in serious crime. Ghani’s remark on the fate of 400 Taliban captives was followed by a quick to respond Taliban statement in which they said convening a Loya Jirga on the fate of 400 Taliban prisoners has “no legal ground” and “Afghanistan is in dire need of peace and intra-Afghan negotiations.”

In a press release, the US Department of State, has urged the delegates of Loya Jirga to consolidate national support for peace. Top US diplomats including Secretary Pompeo and US Especial Representative for Afghanistan’s Reconciliation Zalmay Khalilzad have pressed the parties to work for end of war and bloodshed in Afghanistan.

Does Loya Jirga play a significant role in Afghan politics?

In 1790, the first Loya Jirga, literally means grand assembly, was convened in Kandahar and brought tribal chiefs and religious leaders together to back the uprising of Ghalzai Tribal Chief Mirwais Khan Hotaki against the Persian occupation of Kandahar. The second Loya Jirga, held in 1747, unified Pashtun tribal chiefs around a single cause. The 1747 Loya Jirga crowned Ahmad Shah Abdali as king, establishing the Abdali dynasty. The third Jirga, held in 1897, was convened by Amir Sher Ali Khan to discuss Afghanistan’s diplomatic standing against the Indian British.

In 1916, as the world was fighting the First World War, Amir Habibullah Khan convened the third Loya Jirga to discuss Afghanistan’s foreign policy and its stance towards the World War I. 1923, King Amanullah Khan, Afghanistan’s progressive ruler, convened a Jirga, inviting delegates from across the country to debate new agendas on the country’s foreign policy and Afghanistan’s first constitution. For the first time in the history of Loya Jirga, a woman, Queen Suria, appeared before delegates of men.

King Zahir Shah, under pressure by progressive forces, convened a Loya Jirga in 1964 to debate the new constitution which offered some degree of democracy to the country. King Zahir allowed four female delegates to take part in the 1964 Loya Jirga.

On December 13, 2003, Afghanistan convened the Constitutional Loya Jirga in which delegates debated a draft document of Afghanistan Constitution. The heterogeneous delegates, despite having strong disagreement over nature of a strong-centralized presidency, approved the draft constitution which allowed and consolidated a strong presidency in a country with a bloody history of factional power struggle. On November 24, 2013, Afghanistan, under former President Hamid Karzai, held another Loya Jirga to debate future of bilateral relation with the United States—namely Bilateral Security Agreement (BSA). On April 29, 2019, President Ghani called a grand assembly to discuss a framework and structure for negotiations with the Taliban.

The three-day Consultative Loya Jirga will talk on agenda of releasing the remaining 400 Taliban prisoners. The delegates who have been invited through government channels will discuss whether the government of President Ashraf Ghani should free them or not.

Some critics of government peace policy, however, nag that the agenda of this three-day Consultative Loya Jirga has already been outlined by President Ashraf Ghani and the delegates will not cross the lines set by the government. Former Afghan intelligence chief, Rahmatullah Nabil, who is a vocal critic of government’s peace policy with the insurgent group, says that under umbrella of a Jirga, the government-led by Ghani will free the remaining 400 Taliban prisoners but take no responsibility for dangerous repercussions which are likely to follow in the aftermath of the process.

What appears imminent to happen is a peace settlement between the Afghan government and the Taliban. Washington, main ally of the Afghan government, is counting down for a hasty peace settlement between the two parties. Last year, President Donald Trump—who now seeks reelection in 2020 US presidential election—tasked his especial envoy for the Afghan peace to bring the Taliban and the Afghan government leaders around negotiating table before America’s presidential election, which is scheduled for November this year. The two Afghan warring parties, under pressure by the US government, are trying to reach a political settlement which is designed to ease withdrawal of US troops from Afghanistan and end American’s longest war ever fought in the history of US military.