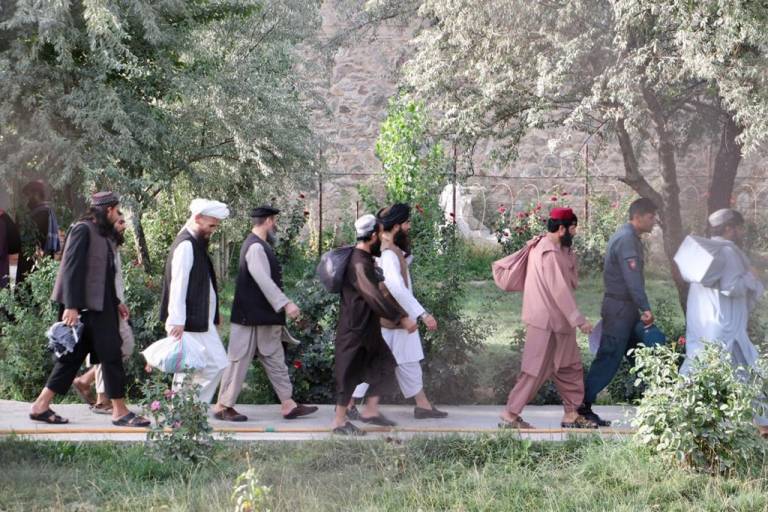 Taliban prisoners released are moving out a government facility in Kabul
KabulNow·August 16, 2020

The intra-Afghan talks, which was scheduled to start on August 16, has been delayed. A Taliban spokesperson confirmed that the intra-Afghan negotiations was postponed as the Afghan government has not released the remaining Taliban prisoners.

But the State Ministry for Peace (SMP) says no exact date has been set for the start of the intra-Afghan talks so far. Najiya Anwari, spokesperson for the SMP, told Kabul Now that as stated by the president and head of the High Council for National Reconciliation, the intra-Afghan talks would start three days after release of the remaining Taliban prisoners. She underlines that no exact date was set for the start of peace negotiations between the government and Taliban.

On the other hand, in a press statement released by the French in Kabul, August 16, the government of France has urged the Afghan government not to free those Taliban convicts who are responsible for deaths of French nationals in Afghanistan.

“France asks the Afghan government not to proceed with the release of several terrorists convicted of killing French citizens in Afghanistan, in particular soldiers and humanitarian workers,” the Embassy said in a tweet posted today.

Last week the Afghan president signed a decree to release 400 high profile Taliban convicts after the consultative Loya Jirga approved liberation of the remaining 400 Taliban prisoners—156 of them were sentenced to death by Afghanistan courts. Among the 400 Taliban convicts, there are individuals who are accused of killings, kidnappings and smuggling, according to the Afghan government.