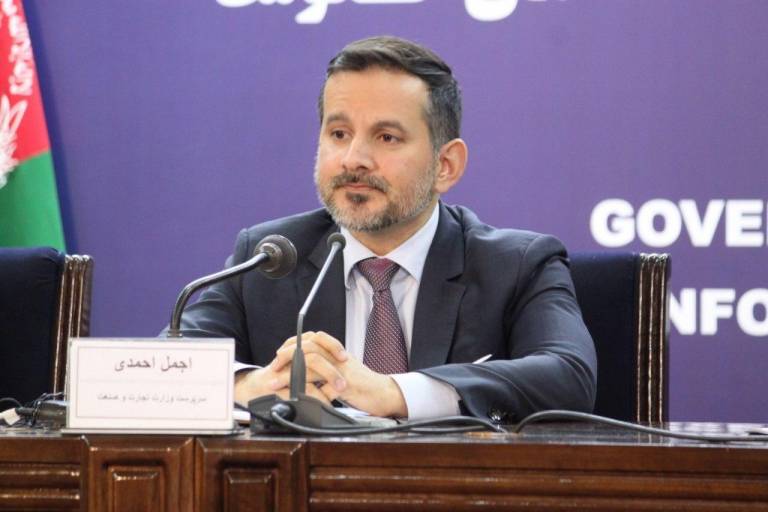 An official Contract for Services obtained by Kabul Now suggests that the Ministry of Finance (MoF) has paid USD 500 per day to Ajmal Ahmady, acting governor of Da Afghanistan Bank, who then served as Senior Adviser to the President in Banking and Financial Affairs. The document shows that Ahmady was entitled to receive a daily wage of USD 500 for one year. The contract signed between Mohammad Homayoun Qayyumi, former acting finance minister and Ajmal Ahmady is made for 12 months (from July 01, 2018 to June 30, 2019) and estimates a total monthly remuneration of USD 12,000 (inclusive of government taxes) for 24 working days each month which is funded by the Word Bank.

According to the document, in addition to the monthly salary, Ahmady has received a total of USD 21,400 as accommodation (10,800 USD/yearly), mobile top up (600 USD/Yearly), and round trip (10,000 USD/yearly) costs from the MoF for the unclear services he has provided during the term. As estimated in the contract, Ahmady would have been paid more than USD 150,000 within the agreed term, 12 months.

Shamroz Khan Masjidi, spokesperson for the MoF, told Kabul Now that Ahmady was paid a total of USD 69,270 for his consultancy services provided for a period of seven month and six days. “Mr. Ahmady has worked a different [number] of working days in various months; for instance, in a month he has worked five days, in another month eight days, and 24 days in another month,” Masjidi said, adding that the contract was terminated on February 05, 2019, when Ahmady was appointed as acting minister of the Ministry of Industry and Commerce.

The contract suggests that Ahmadi was paid thousands of US dollars as Consultant by the MoF—mentioned as “the Client” in the contract—, simultaneously working as President Adviser in Banking and Financial Affairs.

Contrary to the contract’s contents, the MoF spokesperson stated that Ahmady was paid for his advisory services to the president, not for consultancy services to the finance ministry. “He was not paid the salary for being a consultant to the finance ministry, it was paid for his advisory in banking and financial affairs to the President,” Masjidi asserted.

Answering why the contract was signed with the MoF, he argued that the project on which Ahmady was assigned to work was jointly ran by the finance ministry and the World Bank. He further added that Ahmady’s salary range was set as agreed between the Afghan government and the World Bank.

17 days after Kabul Now asked questions from authorities of the central bank, Da Afghanistan Bank, a senior official of the bank said that Ahmady has never received salary from multiple sources at the same time. He added that prior to his appointment as caretaker of the ministry, Ahmady received salary as Senior Adviser to the President in Banking and Financial Affairs.

The contract signed between Mr. Ahmady and the MoF mentions nothing about assignments the Consultant had to do for the Ministry. The contract and its annexes obtained by Kabul Now suggest that no assignment or task is clearly described for the contractor in the document.

Although, in the very first page, the contract says that “the Consultant shall perform services specified in Annex A”, the Annex attached to the document has only some blank spaces as “Background of the assignment” from which nothing can be perceived.

Contrary to the Afghan financial code—obliging that all National Consultants shall be paid in afghani—the bank account details provided in the very document suggests that the payments were made in USD to Ahmady’s bank account at the Bank of America.

As stated on the central bank’s website, Ahmady has previously served as the senior advisor for banking and financial affairs to the president for four years and as acting minister of industry and commerce of Afghanistan. He was appointed as acting governor of Da Afghanistan Bank in a presidential decree issued on June 03, 2020.