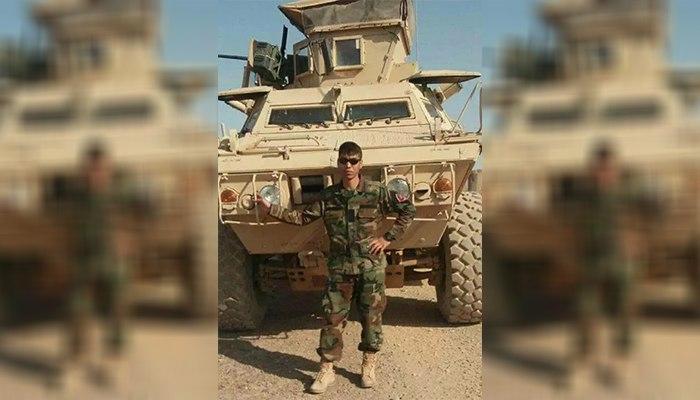 Mahram Ali, in army uniform, somewhere in an Afghan army base
KabulNow·July 28, 2020

Why did army soldier commit suicide?

After serving dinner – few breads and tea – with his two children and wife, Mahram Ali got out to smoke cigarette and went to bathroom as he finished. While preparing to sleep, the children heard a terrible voice from the bathroom. The bathroom door was locked and Ziagul, Mahram Ali’s wife, started shouting with her children. Soon the neighbors entered their house and broke into the bathroom. They found the young army soldier hanged in ceiling of bathroom.

Overwhelmed by extreme poverty in his six membered family, Mahram Ali Muradi, then a school student, changed his age in his identity card, Tazkira, to become eligible to join the Afghan National Army. He was the first from Petaw Laghman, a village in the central Bamyan province, who had joined the national army. According to Ziagul, 25, Mahram Ali had joined the military around 11 years ago and spent eight years fighting in most insecure areas including Helmand, Nimroz, Farah, Jowzjan, and Faryab provinces. She describes Mahram’s duty in Sangin district of Helmand as the hardest and turbulent time during his military services.

Four years back, while on an overnight duty in Sangin district, Mahram ali was ambushed by Taliban militants along with a number of his comrades. They fell into Taliban trap in a forest where streams of water made it more difficult for the soldiers to pass by. The Taliban militants start firing at the soldiers after two of them, who jumped over a stream, were hit with a landmine planted by the militants. Spotting the Taliban position, Mahram Ali hides himself from the militants’ bullet point. He, however, becomes forced to jump in the water. Mahram had jumped into the water to avoid the Taliban to get his personal and government documents. “The water was up to my neck. I took my belongings. When saw my back no soldier was there and all had escaped. I stayed in the water almost for half an hour. When the reinforcement forces arrived and took me out of the water, neither I could speak nor could walk,” Ziagul quoted his slain husband as retelling the scene.

Mahram Ali and Ziagul had grown up in the same village. The two young villagers got married in the fall of 2014 when Ziagul was graduated from high school. The next year, Ziagul passed her university entrance exam, Kankoor, and was enrolled in Engineering Faculty of Herat University. She, however, couldn’t continue her higher education for she got pregnant.

Four years ago, an optometrist of the army helped Mahram Ali to shift his duty site from Helmand to a relatively secure province, Herat in western Afghanistan. Then, the couple moved their residence from Bamyan to Kabul. While their life condition started to improve, Mahram Ali begun to contract to eye disease. He would return home three times a year. Though he would refer to eye doctors whenever returned to Kabul, his eyes were not cured. The problem got severe at an extent that his commander avoided Mahram Ali to participate in military operations. Then, he was often assigned as a guardian of a base belonging to the Afghan Special Forces in Herat. “He would bravely and voluntarily ask to participate and enlist himself in military operation when his eyes were functioning well. When he felt pain in his eyes, then he feared participating in operation for inability to spot the enemy and being shot,” Ziagul said.

Ziagul would take her husband to different doctors whenever he was back from duty and his whole salary (20,000 afghanis) would be spent for medical expenses. The costly and repeated medical treatments, however, healed his eye pains just for four or five days. The doctors would prescribe him costly medicines without an accurate diagnosis of the problem that Mahram Ali’s was suffering from. His salary was not enough for treatment of his eyes and living costs of his family forcing him to ask for debts from his friends and relatives. Two years ago, the unbearable costs forced him to return to Bamyan.

Five months earlier, when Mahram Ali returned home from his base in Herat, he lost his vision completely and couldn’t gain it back. Since then, he was often given half of his salary – sometimes 5,000 and sometimes 10,000 – with repeated delays. According to Ziagul, when Mahram Ali’s brother called to his commander and asked about the reduction in his salary, the commander said that “his salary was likely stolen.”

As per account of his spouse, providing the living costs of his family was the major concern of Mahram Ali. “It doesn’t matter for me to lose my vision completely. But I must have a salary until my wife and children should not face hunger,” the former army soldier had told his spouse. According to Ziagul, the commander had told Mahram Ali that he would be given 10,000 or 12,000 afghanis just for a month and will not be entitled retirement salary for he was not disabled in fighting.

The Ministry of Defense (MoD), however, says that all members of army forces who become disabled as the result of any disease or fighting with enemy are entitled to retirement allowances. “If this soldier’s problem is not resolved, [his families] can make a call and his problem will be solved lawfully by the defense ministry,” said the MoD deputy spokesperson, Fawad Aman.

According to law of Afghanistan’s army, family members of officers and sergeant soldiers, who die of illness while on duty, will be paid a hundred percent of the total salary that soldiers receive in the last month on duty.

Living on donation and committing suicide

The slain army soldier and his family, however, were living on donations made by the people over past five months. “Look at me I’m that weakened that can’t purchase clothes or take you to somewhere. What the hell I should do with this life. My eyes will not recover. I will kill myself. The night and days are similar to me,” Mahram Alil has said to his wife, Ziagul, while embracing his five years old son, Ali Sina, and his two years old daughter, Mahnaz, during Eid al-Fitr days.

After enduring a dark life of five months, Mahram Ali killed himself on Saturday night, May 30, 2020, at age 27. As Ziagul remembers, her husband would often dream of buying a house, car, and taking his son and daughter to school.

Ziagul is now left alone with bitter and lovely memories of past. She is concerned how to earn a living for her children. “I’m concerned that what will happen to my children and myself in the future. How long may we live in the people’s house. They may force us out today or tomorrow. There is no certainty,” she says with a deep pain in her heart.

This story has been developed by Etilaatroz’s Aber Shayagan and translated to English by Mokhtar Yasa.