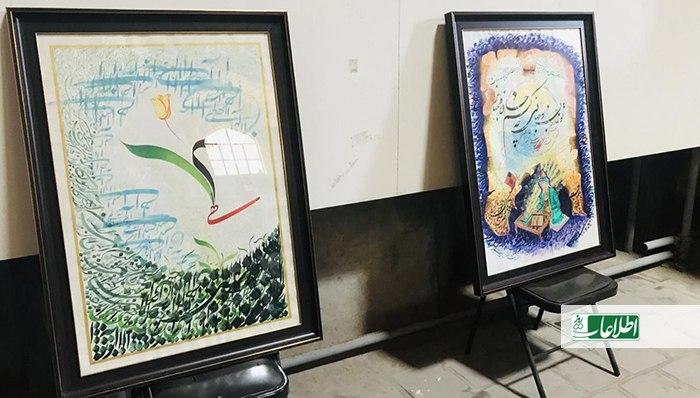 Some Afghan artists say that the governments of Iran and Turkey have been trying to register Khorasani miniature and calligraphy in their names in the list of United Nations Educational, Scientific and Cultural Organization (UNESCO).

Herat located in the western Afghanistan used to be a sophisticated center of painting, miniature and calligraphy in 15th century. Under the patronage of Timurid dynasty, the Herat school of art including Persian miniature, calligraphy and painting flourished.

On July 12, a number of Afghan artists and culture activists held a session in Herat, which was hosted by the Afghanistan Institute for Strategic Studies (AISS). “If the Afghan government does not take immediately action for registration of miniatures and calligraphy art in the list of UNESCO by the end of this summer, these arts would be registered under the name of Iran and Turkey,” Dawood Erfan, head of the institute in Herat, told Kabul Now.

He added that miniature arts and calligraphy should be registered as common Islamic cultural heritage of Afghanistan, Iran and Turkey. Mr. Erfan called on artists and people’s representatives in the Provincial Council and the Afghan parliament to draw the government’s attention to the registration of cultural heritage.

The ancient Herat is known for nasta’liq calligraphy and Persian miniature. Kamaluddin Behzad, a famous miniaturist in the region, was from Herat. His works of art were famous and kept in famous international museums.

Broken nasta’liq script was initiated in 15th century. Mir Ali Heravi, Shafi’a Heravi and Mir Abdul Rahman Heravi are among the most well-known calligraphers in Herat.

The Afghan artists say that miniatures and calligraphy are common cultural assets belonging to Islamic countries, therefore they should not only be registered in the names of Iran and Turkey.

Abdul Jalil Tawana, who is a famous calligrapher in Herat, has been practicing nasta’liq, kofi, and solas scripts for four decades. “Herat is the cradle of nasta’liq and broken calligraphy,” he told Kabul Now. Shafi’a Heravi is the inventor of the broken nasta’liq script. “We have kufi script that is originated in Herat and no one else can use the same writing.”

Many think the Timurid era in Herat to be the peak of Persian miniature and calligraphy. Cultural experts believe that Timurid age of art influenced art schools of Isfahan, Shiraz, Tabriz, Turkey, Bukhara and India.

Nik Mohammad Mustamand Ghori, a calligrapher, says that art schools would not have flourished in other places if Herat artists had not migrated to there.

The Afghan government, under financial pressure, has either ignored valuing art heritage of the country or has fallen short to invest in classic arts such as miniature and calligraphy.

Afghan miniaturists and calligraphers claim that over two decades, they have not participated in any exhibitions or festivals launched by the government abroad. They say that in the absence of government support for artists, countries in the region have tried to remove Afghanistan’s identity from cultural heritage.

Herat cultural experts and artists blame the Ministry of Information and Culture for being irresponsible and unable to register cultural heritage of the country in UNESCO list.

Mohammad Tawfiq Rahmani, miniaturist and dean of the Faculty of Fine Arts at Herat University, says by holding sessions the artist community and culture activists should put pressure on the government to register cultural heritage in UNESCO list. “Before we would start to launch a litigation session, the Ministry of Information and Culture should have had a plan to register historical and artistic heritage [of the country] ​​in UNESCO, but unfortunately it did nothing. A nation dies when its cultural values ​​are taken away, and Afghanistan itself must strive to record these values.”

Officials at the Herat Department of Information and Culture say that they have asked the central government in written letter to stop registration process of miniatures and calligraphy under the names of Iran and Turkey.

Javid Zargham, director of Herat Department of Information and Culture, told Kabul Now that with a letter sent to UNESCO office, it seems unlikely that miniatures and calligraphy would be registered in the names of other countries. “We are among the main inheritors of Islamic miniature art and calligraphy, especially nasta’liq script. UNESCO should not ignore the role of our ancestors in these arts. We hope that these arts would be registered in the name of our country.”

Concerns are raised while last year, dotar, a major instrument of Khorasan folk music, was registered under the name of Iran in UNESCO list.

Herat used to be the center of ancient Khorasan, and numerous arts flourished in ancient Herat. Cultural experts say that the countries of the region were mostly impressed by Herat’s art especially when it came to miniature, calligraphy and tile making arts.

For the time being only few calligraphy enthusiasts are trained by the Herat Calligraphers Association. Six years ago the calligraphy department was removed from Fine Arts College of Herat University.

Abdul Jalil Tawana, a calligrapher, says that looking at the cultural history of Herat, the department needs to be reactivated as soon as possible to keep the art of calligraphy alive. “In Herat, it makes no sense not to have an independent calligraphy department at the university.”

Art teachers at Herat University say that the Ministry of Higher Education removed calligraphy department, justifying that there was no major related to calligraphy in master’s program—which they think is ‘not logical’.

Mr. Rahmani says that graduates of the calligraphy department can get a master’s degree by majoring in “art study”. In a meeting with artists in Kabul last year, President Ghani instructed the Ministry of Higher Education to initiate majors such as calligraphy at universities but to no avail.