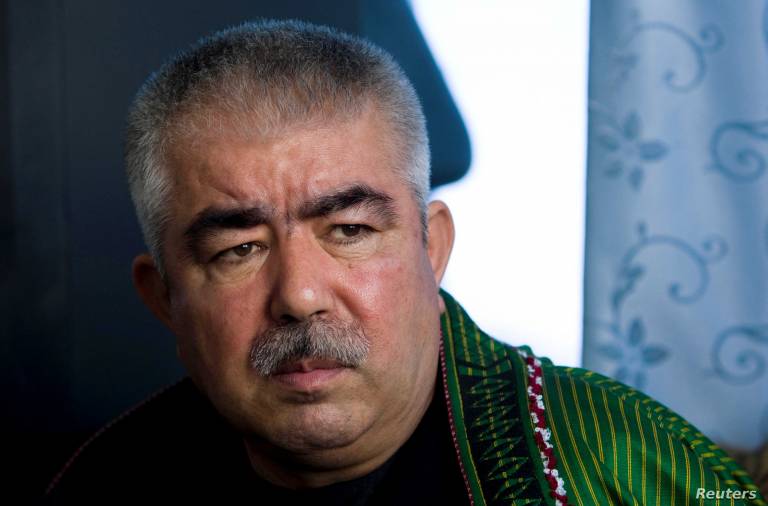 The first Uzbek marshal of Afghanistan

Rashid Dostum, who served as first vice president of Ashraf Ghani from 2014 to 2019, is an influential Uzbek leader. In the 2019 presidential elections, Dostum joined Abdullah Abdullah’s ticket, a team that ran the elections against President Ghani. The disputed election results of the 2019 locked the two candidates in a political deadlock which was settled after months of negotiation on a power sharing deal—signed on May 17, 2020. Under the deal, Abdullah was assigned as head of the High Council for National Reconciliation, with authority to pick some cabinet members, and General Abdul Rashid Dostum was promised to be awarded an honorary marshal rank.

Seen as warlord by most of his opponents and a devout leader by his followers, Abdul Rashid Dostum was born in Khoja Doko village of Jawzjan province in 1954. As a son of poor Uzbek family, the young Rashid leaves school in 1968 and joins an oil and gas refinery company in Shiberghan. In 1974, under the then government rule, he was conscripted to serve a two-year military service in the Afghan army. The April coup of 1978, which overthrew Sardar Daud Khan government, changed almost everything in the country. Rashid joined the Afghan army led by the new regime of Democratic Republic of Afghanistan. In the subsequent years, Abdul Rashid, then known as Dostum, staunchly served in the Afghan army and fought against the mujahedeen fighters. After the Soviet invasion of Afghanistan, Dostum was promoted to lead the Fifty-Third Division which hit the insurgents in eastern Jalalabad.

Soviet debacle changed the fate of Afghanistan and the Afghans. The Afghan government, led by President Najibullah, fought against Mujahedeen for three years after Soviet withdrawal but a political rift between President Najib and Dostum made the later make a swift turn to mujahedeen. In 1992 when the mujahedeen—mainly the Tajik militias led by Ahmad Shah Massoud—took control over Kabul and established the Islamic Government of Afghanistan, Abdul Rashid Dostum founded a de facto-state in the northern Afghanistan. In 1996 when the Taliban militants captured the capital Kabul, the Uzbek militias led by Dostum made alliances with Tajik and Hazara forces to fight a common enemy, the Pashtun Taliban. In October 2001, Dostum’s armed men played a key role in a joint operation with CIA operatives against the Taliban in Mazar-e-Sharif. General Abdul Rashid Dostum declared a full support for the Bonn Agreement but in post-Taliban establishment he was labeled as warlord and under President Karzai government, Dostum was marginalized.

Months after he was sworn-in as the First Vice President, Abdul Rashid Dostum was accused of ordering abducting and raping Ahmad Ishchi. Men under his leadership were accused of raping Ahmad Ishchi, a local rival of Dostum in Jawzjan. Following the Ishchi scandal, he was sent to exile in Turkey. Dostum’s supporters, however, claimed that it was a “political conspiracy” against him.

Marshal Dostum, speaking in today’s ceremony, thanked his political ally Abdullah for his efforts to include the honorary rank of marshal in the political agreement signed between the two leaders. He expressed his gratitude to President Ashraf Ghani and people of Afghanistan for awarding him the highest military rank. The 66-year-old Marshal Abdul Rashid Dostum called on the people of Afghanistan to stay united.

Marshal Dostum, though criticized by his critiques for iron-handedness in treatment of his local rivals and enemies, is admired by Afghanistan’s Uzbek community. He has survived many assassination attempts. In October 2016, Taliban fighters ambushed his convoy in the northern Faryab province while he along with his armed men were on a security patrol. In September 2016, Taliban fighters attacked on his convoy in Shiberghan in northern Jawzjan province. The Uzbek Marshal, who is an experienced military leader, has long been fighting against the Taliban militancy.