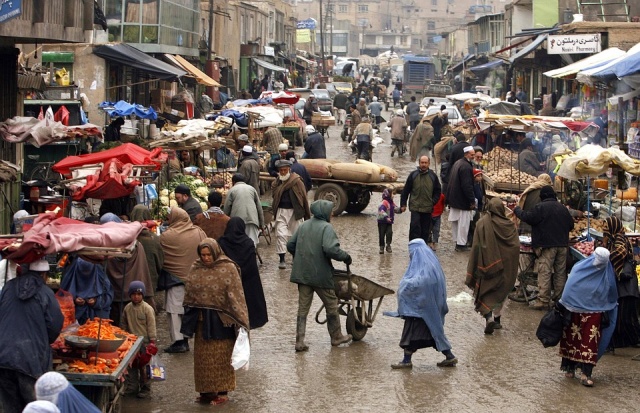 Though the official figure about death toll caused by the Covid-19 shows a decline in the country, a new poll jointly conducted by Kabul Now and the daily Etilaatroz suggests otherwise in the capital Kabul. The poll has found that there is a huge difference between the official death toll (195) and what has been cited as deaths from the Covid-19 by the survey participants (1,629) in Kabul.

As the number of corona patients in Kabul exceeded from Herat, the government extended an already declared lockdown in the capital. But the lockdown strategy did not work well as majority of the families in the capital—which is home to an estimated six million population—depend on daily wages. The government took an initiative to support poor families and distributed breads, wheat, and cooking oils. This opinion poll shows that the majority of families haven’t received any aids. Most breadwinners of the poor families, under financial pressure, broke the lockdown and got out of their homes to work, earn, and feed their families.

As many as 384 participants, residing in 19 different districts of Kabul, participated in this survey which is formulated in kokaran formula. The finding of this survey shows a totally different result which defies the official figures issued by the country’s Ministry of Public Health (MoPH).  According to the ministry, a total of 195 people infected by the coronavirus have died as of Wednesday, July 01. But the number of likely deaths reported by the participants is 1,629. A vast majority of the participants (74.5%), reported receiving no aid from the government, complaining that the aid are peculated by authorities and strongmen.

The survey is made of 11 quantitative questions. The answers for these questions are based on personal knowledge, experience, and observations.

Vast majority reports receiving “no aid” from the government

This survey has also asked about suspicious deaths caused by the Covid-19 and has found a dramatic difference between the official figure and the number reported by the participants. A broad majority of the participants (83.8%) said that they know of someone who passed away for having coronavirus. Collecting the number of suspicious deaths cited by the participants, the total death toll likely caused by the coronavirus becomes 1,629.This suggests a huge difference (1,434 more deaths) than the official figure (195) updated on Wednesday, July 01, in Kabul. Some of the reasons for this huge difference might be that many people neither go to hospital, nor they tell others that their patients have passed away due to the coronavirus. On June 07, at a news conference, Mohammad Yaqub Haidari, governor of Kabul said that there were a significant increase in suspicious deaths in Kabul. “We have suspicious deaths that we didn’t have before. We bury the bodies in the night time, which didn’t happen in the past,” said the governor. He added that many people infected by the coronavirus haven’t visited the hospitals, and that many people suspected of having coronavirus have not been tested due to limited health facilities and medical equipment.

According to Kabul governor, Haidari, the number of corona patients in Kabul may exceed one million. Earlier on April 04, the MoPH announced that 80 percent of Afghans might be infected by the coronavirus. “According to estimations, as many as 80 percent of the country’s population is likely to be infected by the coronavirus,” said Wahiduallah Mayar, former spokesman for MoPH. He added that, “if we mobilize and take actions, we can prevent the number of people who may die as the result of coronavirus.”

The health officials have repeatedly acknowledged that the infection rate is much higher than the confirmed cases. At a news conference on June 06, Ahmad Jawid Osmani, head of the health ministry said that the test capacity of coronavirus samples is limited in the country, and that the samples taken from suspected cases for testing are ten times larger than the testing capacity of the government. Therefore, it takes a long time for the health officials to go through the tests and check out their results. In the meantime, many people do not visit the hospitals and try to hide their illnesses. For instance, when the interviewees were asked the question of whether they know anyone who hide their coronavirus, 25.3 percent replied “yes”. One of the reasons shared by majority of the participants (63.6%) was that having the Covid-19 illness is “stigmatized” and many people have the fear of losing their connections and social status. As a result, they would hide it. One of the participants in particular said that his neighbor passed away as a result of being infected by the virus, but his family hid the fact and only after completing his funeral ceremony disclosed his illness. According to his family, they had the fear that no one would show up for his funeral ceremony.

Meanwhile, 27.1 percent of the participants reported that their friends and relatives are “not hiding” their infection, adding that there is no reason to hide the disease. 14.8 percent of the participants said that only a “limited number of people” hide their illness and that’s either because of having the fear or not knowing that they are infected by the virus. The remained 32.8 percent decided not to answer this question.

A vast majority of interviewees (70.3%) who visited the Covid-19 hospitals said that they were “less satisfied” with the health services of the hospitals. According to these participants, they were faced with lack of health services, mismanagement, and rude behaviors of the doctors as they visited the hospital. One of the male participants said that his young son passed away due to lack of health services at a hospital. Another participant said that while carrying the dead body of his young daughter, a doctor approached him and offered him 300,000 afghanis if he would give his daughter’s body to him. When he was asked why the doctor had to offer the amount for getting his daughter’s body, the participant said that he didn’t ask the doctor and it wasn’t the time to make deals with the doctor over his daughter’s body. Only 7.14 percent of the participants said that they are “very satisfied” with the health services of the hospitals which are mostly private. Although by then the private hospitals were not allowed to accept corona patients, 10 out of 15 interviewees said that when they realized that they have the symptoms of coronavirus, they visited the private hospitals and the doctors without taking the test, prescribed them some medicines which made them feel better.

Public awarenes and source of information

With the outbreak of coronavirus in China, Iran, and Afghanistan, many people started doubting on whether or not the virus really exist. Unfortunately, majority of people still consider it as a lie which make anti-corona campaign a more difficult job.