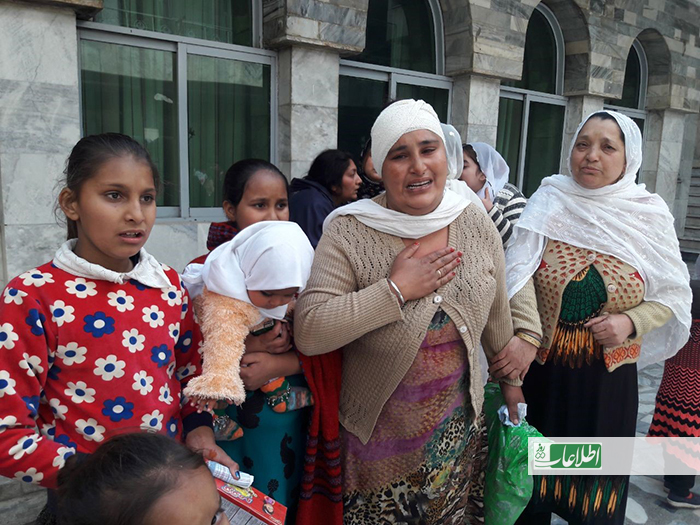 The first group of Afghan Sikh asylum seekers arrived in New Delhi today, Sunday, July 26, and a batch of eleven Afghan Sikhs were warmly received by members of Sikh community at Delhi airport, according to an Indian television.

Last year, the Indian government offered visa facilities and long-term settlement to Afghanistan’s shrinking Sikh and Hindu community after the community came under deadly attacks, which killed dozens of them and left the community in an unending state of fear.

The Sikh and Hindu community of Afghanistan continues to bear the burden of discrimination which roots in a xenophobic Islamo-tribal culture of the Afghan tribes. The Sikh and Hindu, who in large run traditional businesses of herbal medicines in urban centers of Afghanistan, have been subject to judgment, mockery and mistreatment by the Muslim countrymen, perhaps ever since their presence in the country. The popular lore about Afghanistan’s Hindu and Sikh was a common subject of chattering among people in villages. When I was child, men of my village, who had traveled to Ghazni city, would stereotype Hindu shopkeepers in a fashion that would portray an image of “other” in my childish naïve mind. “They (the Hindus and Sikhs) smell bad and they worship idols” were the first and the most popular lore about Hindus and Sikhs in our village.

This roguish stereotypical portray of Hindus and Sikhs was creation of a xenophobic behavior. In late 1990s when my family escaped Taliban persecution and left our village, for the very first time in the tiny city of Ghazni, I encountered Sikh shopkeepers who were cleaner, politer and more well-bred than us.

Any stereotype invented about a group with different background serve a given purpose: otherism.

We have been less tolerant to each other and shamefully we have never been tolerant to our Sikh and Hindu countrymen.

Afghanistan’s Sikh and Hindu community, though a handful elite of the community enjoyed serving high-profile government posts under King Zahir Shah, was never welcomed in Afghanistan. They are not treated as equal to a pious Muslim in a country where majority of the population are Sunni Muslims and country’s law is a Sunni one.

The popular narrative about the Hindu and Sikh community in Afghanistan, consciously or unconsciously, is designed to demonize the Sikhs and Hindus. The Sikhs and Hindus, seen as “unbeliever” in the eyes of Muslims, are subject to suffer the worst kind of persecution. In early 1990s when the Afghan mujahedeen conquered Kabul, some militia groups forced the Hindus and Sikhs out of their residences and confiscated their properties. Under the Taliban rule, the Hindus and Sikhs in Kabul suffered the worst kind of harassment and persecution—almost similar to which the Jews suffered in Nazi-occupied Germany.

Most members of the community are unable to read and write. Afghan Hindu and Sikh families cannot enroll their children in schools where Muslim students make the majority. Over last nearly 50 years, Afghanistan’s Hindu and Sikh community is denied an opportunity to have equal rights in a country where ethnic identity and politics influence governance, policy makings and power sharing arrangements.

In July 2018, a suicide bomber detonated his explosive, claiming lives of 19 Afghan Sikhs. The suicide bombing wiped out the entire educated community of Sikh and Hindu, including Awtar Singh Khalsa, a civil activist and the only Sikh candidate running for 2018 parliamentary election. In March 2020, gunmen launched attack on a Sikh temple in central Kabul, killing nearly 25 civilians and wounding eight others. The Islamic State of Khurasan Province (ISKP), an outfit of Islamic State, claimed responsibility for the attack.

In Afghanistan, the cycle of oppression, which suppresses from top to bottom, continues to suppress the minority groups the most. Being a Sikh or Hindu is not easy in the Afghan society where an extremist religious trend backed by tribal mindset is struggling to take control over public life. The disenchantment of Afghan Sikh and Hindu community comes out of a direct coldshouldering behavior of successive Afghan governments and discriminatory treatments of the Afghan Muslims.

The imminent mass-migration of the dwindling Afghan Sikh and Hindu community is an ugly reality of our country. Over last years, most Sikh and Hindu families were forced to sell their properties in major Afghan cities of Ghazni, Herat and Jalalabad and now a tiny number of them are left alone in Kabul. We have been less tolerant to each other and shamefully we have never been tolerant to our Sikh and Hindu countrymen. This is a big shame.