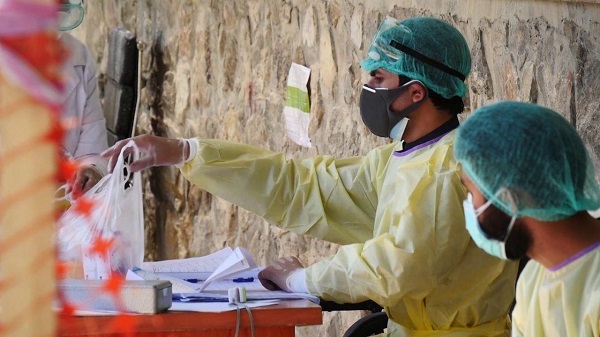 The Afghan Ministry of Public Health (MoPH) adopted a new response policy of fighting against the coronavirus as the covid-19 pandemic continues to climb throughout the country. The new policy allows some private health facilities to work along the public hospitals for a better fight against the disease.

The plan was announced by caretaker of the MoPH, Ahmad Jawad Osmani, on Thursday, June 11. “From now on, the main focus of the entire health sector would be to fight against the virus in the capital and other provinces,” says Osmani.

Although the plan was welcomed by the private health sector, some MPs, a number of citizens and activists say that implementation of this policy would put a financial burden on people.

1. Cooperation between private and government health sectors in fighting against the coronavirus. All the private health sector must be prepared for the fight against spread of the covid-19, according to new policy.

2. The private sector will be allowed to take the test for the corona patients if they are well-equipped and well-facilitated.

3. The governmental and private sectors should admit patients and treat if they are well-equipped.

4. Plasma therapy is allowed for a rapid treatment of corona patients. Given a patient’s condition, the permission is given to doctors to decide whether the patient needs to receive plasma therapy or not.

5. People with mild or moderate symptoms of coronavirus should quarantine them at home and should stay under supervision of doctors.

The MoPH has taken this initiative as the number of Covid-19 patients is on rise and public hospitals run short of staffs and supply to meet this challenge, says  Akmal Samsor, spokesperson for the MoPH. These sectors need to create separate wards for the corona patients and be ready for admitting and treating corona patients. He added that, health sectors should provide training facilities and medical equipment for their staffs so that they can treat the patients in a better way.

“Only the R.T.P.C.R test is valid and that the rapid tests are invalid, therefore the hospitals must create minimum capacity of admitting ten corona patients,” according to instruction of the MoPH.

Currently there are 1,093 secondary health centers, 878 main health centers, 438 medical centers, 88 district hospitals, 302 mobile health teams, 791 other types of health centers, 27 provincial hospitals, 29 national specialty hospitals, nine regional hospitals, and 528 private hospitals in the country. Up to 90 percent of people have access to health services. The MoPH says that this capacity should be used in fighting against the virus, according to official figures.

Meanwhile, Fardin Gharman, head of Afghanistan Private Hospitals Association, says that 69 percent of good-quality health services are provided by the private sector and that private sector’s contribution in the fight against coronavirus would be a great help to people and the society.

“Unfortunately, the situation is out of control and even before the announcement by the MoPH, the private health sector would admit corona patients, some of the patients were admitted by force,” says Mr. Gharman. He underlines that implementation of such a policy would not be an easy task.

Mr. Gharman says that admission charges of a single corona patient was offered to be 9,000 afghanis per night, with some equipment which be provided by the government but the government refused to approve it. “The government told us that medical costs must be paid by patients,” says Mr. Gharman. He added that, due to poor economic condition of the people and lack of government support, private health sector face serious problems.

Taking test and getting admitted in a private hospital cost around 9,000 afghanis, which is a huge sum for poor people to pay. “The plan of asking private health sector to work with public health sector should be arranged based on the people’s financial condition,” says Najibullah Naser, a MP and chairperson of the parliament health commission.

Covid-19 hospitals in Afghanistan are facing shortage of medical equipment. Many patients lost their lives due to difficulty in breathing and shortage of oxygen balloons though Wahid Majroh, a deputy minister for healthcare service delivery, had previously said that the shortage of balloons would be addressed soon.

People are deeply concerned about treatment of covid-19 patients in private hospitals. Nusratullah Hafizi, a Kabul resident posted on his Facebook; “the plan of asking the private sector to admit and treat corona patients [is a move] to reduce responsibility of MoPH and it doesn’t help people at all,” he wrote.

“Unfortunately, fighting against coronavirus in the country has turned into a business,” says Khalil Raoufi, a civil activist. “Millions of dollars are donated to the health sector, and people still have to pay for the services,” he added.

Meanwhile, Mr. Gharman says that “those patients who are unable to pay for the services, their cost would be covered by the MoPH. And that this plan of paying 9,000 afghanis per night is only for the people who can afford it.”

According to Khalil Raoufi, the government doesn’t allow civil society members to monitor the spending of the budget which is allocated for Covid-19, which increases the probability of committing corruptions.

The Afghan ministry of public health on Wednesday, June 17, confirmed that the total number of coronavirus cases has reached 26,874 in the country. 504 people infected by the virus have passed away and 6,158 others have survived.