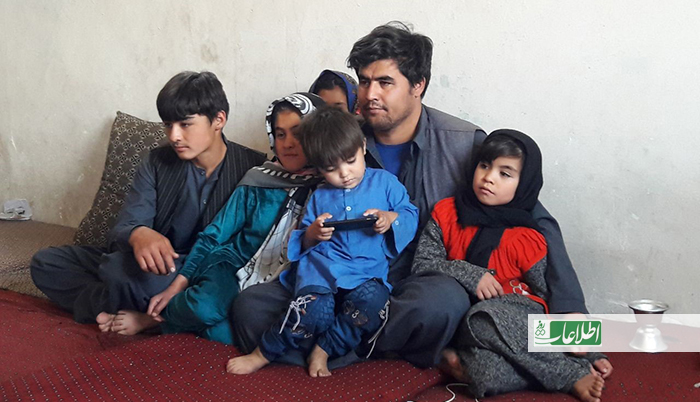 The desperate Hussaini family posing for a photo, gunmen killed Hussaini's wife on Many 12 in Kabul
KabulNow·May 18, 2020

“Your mother is dead”, Hadi was told hours after hospital attack

“We are under attack in hospital. I want to come home … tell your father to offer one of the turkeys as a sacrifice,” Batool heard her mother’s trembling voice on phone around 10:00 AM on Tuesday, May 12, and then the call gets interrupted. Batool answered her mother’s call upon the request of her father, Qurban Hussaini, 32, who was in wheelchair and couldn’t get to the phone rapidly.

Minutes later, Qurban gets to the phone. He calls back repeatedly but in vein. In a hurry, Qurban gets out and touch one of the turkey’s wings intended to sacrifice it for the safe return of his wife, Zamira.

On that day, Zamira had gone to the hospital to discharge her newly born baby girl, Hadia, who remained in the maternity ward of the hospital to receive health care after her birth few days ago.

Hadi, the eldest son of the family, also tried to call the hospital but could not reach. He left home in harry to check up the hospital. Overwhelmed by worries, Qurban also started wheeling to hospital. “Here are the Taliban and the fighting is going on,” Qurban heard when answered his son’s call in the middle of the way to the hospital.

Accompanied by three of his close relatives, Hadi checked many hospitals for the whole day. He dialed once again his mother’s number around 05:00 PM. The call was answered but what Hadi heard was not tolerable. He was totally broken by the answer. “Someone answered and asked what my relationship to her is. I said I’m her son,” the teenager told while hardly keeping himself of being broken into tears. “God may bless you. Your mother is martyred. Bring your copy of Tazkeera tomorrow and take her body from the forensic medicines,” Hadi quoted the guy on other side of the phone as telling.

Sitting inside the yard of his mud house in a slum area of Barchi, a western neighborhood of Kabul, Qurban seems speechless of how to express the huge blow caused by the unexpected death of his wife who was the main breadwinner of the family. “It’s hard” is the only word which frequently comes to his tongue about the death of Zamira.

“She left us all orphans. It’s still unbelievable for me. She was everything to me. Neither my father, nor my mother did help me. My wife was everything to me,” the 32 year-old man who cannot move without wheelchair opened up his heart, adding that he is now just consoling his children that everything will be ok and he will manage.

Except Hadi, other children cannot realize what the tragedy of their mother’s death means for them. According to their father, Batool, Saeeda, Salma, and Sakhi just have heard that there mother is “martyred” but they believe their mother will come back home in upcoming days. The eldest son, Hadi, however, does understand this tragedy with his soul and heart. “My mother was responsible for everything. She would wake up early in the morning, did her morning prayer, would go to her tailoring shop, and come back at night. She was helping my father and provided our living expenses,” Hadi said, adding that his mother would encourage them only to study their lesson and she will work.

While digging a well, as part of his harsh labor in Iran, Qurban fell in the well and broke his lumbar spine eight years ago. Since then he cannot walk and must move in a wheelchair. Returning to Afghanistan, he went to the International Committee of Red Cross (ICRC) office where he learned repairing mobile phones and then opened a repairing shop on a borrowed money. The business would not sufficiently provide living expenses of the family.

A year earlier, Zamira, learned tailoring profession and then opened her own tailoring shop. Moreover, she hired two disabled girls as her paid intern with a monthly payment of 4,000 afghanis or 5,000 afghanis. “Zamira was a very good woman with pleasant behavior. I was her classmate in literacy program too. He did work with me for half of the day and would work the remaining half with another disabled intern at home,” said Hawa, 29, who was working as intern with Zamira for last eight months.

Zamira gave birth to her sixth child a week before the hospital attack. Since the newborn baby girl, Hadia, had respiratory problems and anemia, the doctors hospitalized Hadia for seven days. Hadia had been cured but lost her mother in the same day they were both supposed to leave the hospital for home.

Qurban received his baby girl, Hadia, from Ata Turk Hospital a day after burying Hadia’s mother. Since then, many people referred to him proposing to adopt Hadia, inter alia, a wealthy man who would probably afford to provide a good living condition for the newly born baby. Fearing to lose the last child of his wife, Qurban rejected all other adoption proposals. Instead, he gifted Hadia to a couple from his own province, Daikundi, who have not succeeded in bringing a child since their marriage, 18 years ago.

“We have now written on the paper that Hadia is their child and Qurban does not have the right to say ‘come back’ to Hadia,” the man stated with a deep pain in his heart.

The 32 years old man, whose hands and foots are paralyzed, is now concerned about the future of their children while has so far failed to pay the rent of his house for the previous two months. According to him, the doctors have said that his broken spine has 70 percent chance of being cured but he cannot afford the cost to go to a foreign country for treatment.

“The only skill I have is repairing mobile phones. If it doesn’t work, I cannot do anything else. I’m concerned about future of my children. I do my utmost efforts to educate them,” he said.

Salma, who is Zamira’s nine years old child, is a third grade student at school. She is now dreaming to become a police. “I want to take the revenge of those killed [in the hospital attack],” she said.