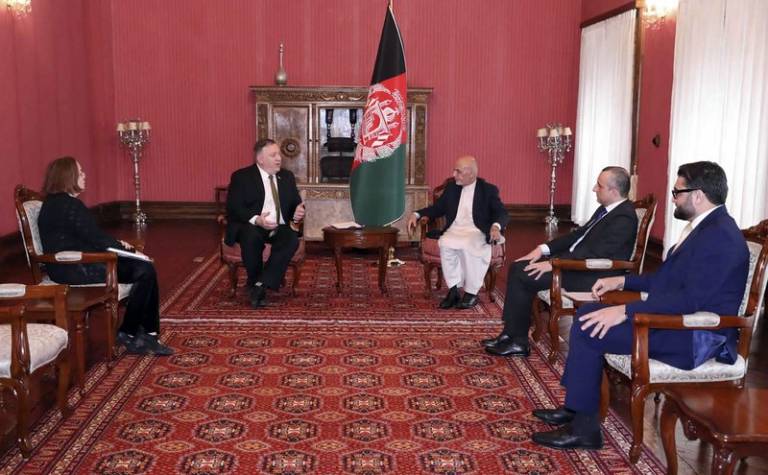 US Secretary of State is meeting Afghan President Ashraf Ghani in Kabul on March 23
Asad Kosha·March 24, 2020

US threatens to cut aid amid political crisis and corona outbreak

The United States threatens to cut one billion USD aid at a time when Afghanistan is locked in a political impasse and struggles with challenges caused by a rapidly spreading lethal pandemic. The unprecedented threat by Washington comes while yesterday, March 23, US Secretary of State Mike Pompeo, in an unannounced urgent visit, landed in Kabul to bring the rival Afghan leaders to agree on formation of an inclusive government but in vain. Secretary Pompeo held separate meetings with Afghan President Ashraf Ghani and his main election rival Abdullah Abdullah. Mr. Pompeo, disappointed by both Afghan leaders, left Kabul for Doha, the Qatari capital, where he met with a Taliban leader to discuss issues related to US-Taliban peace deal, signed last month. His unannounced Kabul visit took place at a time when world leaders have put international travels on halt.

“The Unite States deeply regrets that Afghan President Ashraf Ghani and former Chief Executive Abdullah Abdullah have informed Secretary Pompeo that they have not been able to agree on an inclusive government that can meet the challenges of governance, peace and security and provide for health care and welfare of the Afghan citizens,” reads a statement issued by US Department of State.

The first-time US threat to cut one billion USD aid is a direct response to stubbornness shown by the Afghan President Ashraf Ghani and his election rival Abdullah Abdullah to agree on formation of an inclusive government. The two political rivals, who contested in the disputed 2019 presidential elections, held parallel sworn-in ceremonies on March 09, with each declaring himself as an elect president of Afghanistan.

“Among other steps, we are today announcing a responsible adjustment to our spending in Afghanistan and immediately reducing assistance by $1 million this year,” the statement reads.

The announcement to cut one billion USD aid money comes at a time when the country is dealing with a rapidly spreading coronavirus pandemic. With an estimated 35 million population, majority of the country’s population live under poverty line. Public health care system is poor. The country’s economy is largely dependent on foreign aid and unemployment is on the rise.

Ashraf Ghani responded to US announcement

Today, Tuesday, March 24, Afghan President Ashraf Ghani, in a video message, reacted to America’s announcement on cutting a million dollar fund. “We thank the United States of America for the dedicated assistance it has given to Afghanistan but America’s aid cut will not impact key sectors of our country. We will find an alternative to substitute it,” Ghani said. Though Mr. Ghani described his meeting with Secretary Pompeo as a ‘constructive meeting’, the tone and content of announcement made by the US Department of State shows au contraire.

The pledge by Ashraf Ghani to fill financial vacuum to be caused by America’s aid cut is made while the country is locked in a political crisis which is about to reach its peak. Abdullah Abdullah, who is backed by strong politicians, demands a fair share in government whereas Mr. Ghani looks uncomfortable to share the cake of power with a rival faction that insists to have won the 2019 presidential elections.

The squabbling political crisis coupled with a fatal Covid-19 pandemic will push the nation on threshold of poverty and national catastrophe, with the two Afghan leaders, each backed by powerful political factions, resist to show flexibility to agree upon an inclusive government. Frustrated by spread of coronavirus pandemic and bickering political crisis, ordinary Afghans, who depend on daily labor wage and small business income, are struggling with an increasing business lockdown and a growing unemployment in a country which is on the verge of a catastrophic pandemic hit. The Afghan public health ministry has registered 74 positive cases of Covid-19 but the actual number of Afghans infected by the virus is believed to be far larger than official record confirmed by the Afghan health authorities.

Washington’s threat to cut aid coupled with inability of Afghan leaders to work together in an inclusive government make the Afghan government more vulnerable to a growing crisis at a time when the US prepares to leave the country, the Taliban put more pressure to gain more share in the future setup, and a lethal pandemic spreads faster than before.

The peril of Afghan situation at a point when the country faces numerous economic challenges, polarizing political crisis, and a rapidly spreading fatal pandemic, is a consequential financial disaster that may come after a complete lockdown in the overpopulated capital Kabul and other major Afghan cities.