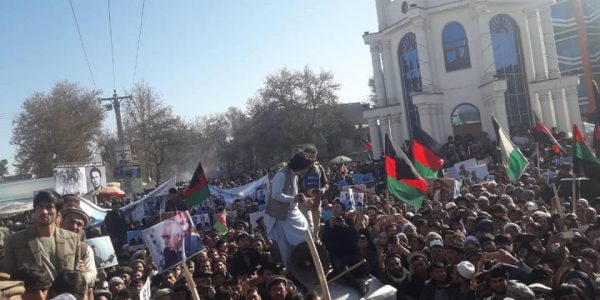 Supporters of the presidential candidate, Abdullah Abdullah, who is the incumbent chief executive, expanded their election related protests to the northern Faryab and Takhar provinces.

Talking to Kabul Now, spokesperson for the provincial police chief, Khalil Asir, said that the protest was held peacefully. According to the local official, the protesters started marching downtown with full security measures in place to ensure safety of the protesters.

He added that there was not reported any security incident since the beginning of the protest.

Moreover, a number of supporters of the stability and partnership ticket led by Abdullah also protested against what they describe as “vote manipulation” in the northern Faryab Province.

According to Jawid Bidar, who is spokesperson for the provincial governor, the protest was kicked off from the area where the IEC’s provincial office is located in and continued with no security incident.

Abdullah’s supporters also took to the streets yesterday, December 01, in the northern Baghlan province where supporters of the “state builder” ticket led by the incumbent President Ghani had protested previously, on November 30, in support of the IEC’s decisions

The protests have expanded to provinces after thousands of Abdullah’s supporters took to the streets in Kabul on Friday, November 29, against what they described as “widespread and systematic fraud” in 2019 Afghan presidential elections.

The protesters demand for invalidating around 300,000 “non-biometrically verified votes” and “votes cast beyond the voting time limit” on the Election Day, September 28, 2019.

Executive director of the Free and Fair Election Forum of Afghanistan, Yousuf Rasheed, also pronounce the IEC’s decision as contradictory to the election law and IEC’s own procedures.

The IEC, however, reiterated a day after Kabul protests, on November 30, that they will not invalidate votes before completion of the recount and audit process.

Talking to Kabul Now, Assadullah Saadati, running mate of Abdullah for second vice president, argued that including the 300,000 votes in the recounting process would increase vote share of Ghani’s state builder ticket.

He further went on to warn that the stability and partnership ticket would go beyond the protests, if the IEC continued to “manipulate” votes. “We do not accept the government coming out of vote rigging,” Saadati asserted.

On the other hand, a council of Afghanistan presidential candidates proposed creating a national coalition government in a statement issued today, December 02, in Kabul. They further argued that the leaders of the incumbent government have failed in managing the peace and election processes.

President Ghani’s spokesperson, Sediqi Sediqi, however, rejected the proposal as in contradiction to the country’s Constitution. “The Afghan people do not deserve empty proposals,” he wrote on his official twitter account today, December 02.