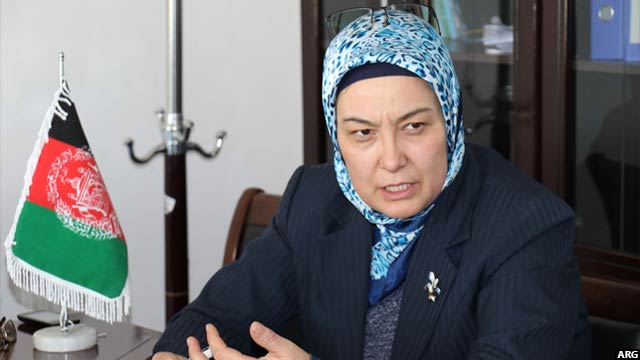 Maliha Hassan is on hunger strike protesting against prison condition

Former member of Afghanistan’s Independent Election Commission (IEC), Maliha Hassan, who was sentenced to five years imprisonment on September 03, is in critical health condition. Ms. Hassan is on hunger strike for the last couple of weeks, her lawyer, Mohammad Farhang told Kabul Now.

It is said that Maliha Hassan has gone on hunger strike to protest against bad condition of detention center. Lack of basic facilities, improper hygiene and lack of clean food have compelled this former female member of the IEC to go on hunger strike.

It is not the first time Hassan goes on hunger strike. She had gone on strike for weeks in the past too, but as her health was deteriorating she stopped her strike.

On 14 October, Maliha Hassan was taken to a 300-bed hospital in the capital Kabul. According to her medical records and MRI test, her lumbar vertebrae have been effected and needs a surgery. She suffers from severe pain in her back and right leg. Mr. Farhang said that one of Ms. Hassan’s leg was numb, and she was hospitalized for two weeks.

Mr. Farhang told Kabul Now that she cannot be treated at hospital inside the prison. She must be admitted to a hospital outside. However, according to him, the Attorney General’s Office (AGO) refuses to allow her receive medical treatment outside.

Farhang said that on November 03, he filed a petition with the AGO to allow Ms. Hassan receive medical treatment but to no avail.

Under Article 332 of the Penal Code, every prisoner has the right to receive medical treatment in a well-equipped hospital when he or she is in critical health condition.

Mr. Farhang says the country’s judicial institutions are biased and the AGO does not act independently and it receives instructions from people who are in power.

Nasrat Rahimi, spokesman for the Ministry of Interior Affairs, however, says all the facilities including a single room are provided to Maliha Hassan and there is no problem at all. He added that anyone wishing to meet with Ms. Hassan can visit her at any time.

The former electoral commissioner, Maliha Hassan, was sentenced to five years’ imprisonment with nine other commissioners on charges of breaking election law. The commissioners were accused of manipulating votes in Kunar constituency.

But the imprisoned commissioners described their trial as a ‘politically motivated’ move.