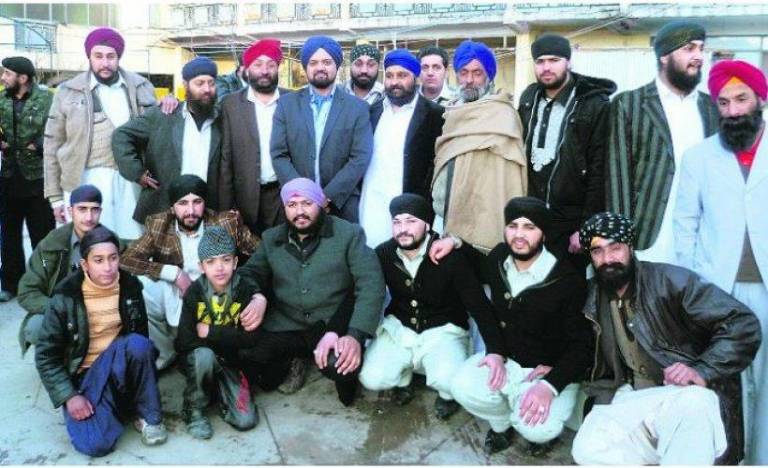 Afghanistan’s Sikhs are subject to ill-treatment

After school graduation in 2010, one of many wishes, Weki and Raj, two Afghan Sikh siblings, had was to attend university and get higher education. But their dreams never turned into reality in Afghanistan, a country where Sikh community is discriminated by majority of hardcore Muslims.

Currently, not even a single Afghan Sikh is found in the entire universities of the country. Even majority of Afghan Sikhs cannot complete high school as they feel discriminated in public schools and public space.

The reason why Afghan Sikh cannot continue getting higher education looks complicated. Discrimination, financial burden, suicide bombing targeting the community, and insecurity are often counted as reasons that stopped them of getting higher education. Even those Sikhs who can afford to go to private schools and universities, are subject to discrimination and ill-treatment.

Kartar Singh, a 57-year-old Afghan Sikh, who is born and raised in Kabul, said that financial hardship forced him to give up school and work to support his family. “I completed seventh grade.”

Poverty among Sikh and Hindu community is widespread. Mostly over-populated Sikh families rely on their teenage sons and daughters who work in the street to make sure there is enough food on the table for family.

Weki and Raj finished high school. After graduation, they found themselves forced to work and support their 8-membered family. But even a small number of Sikh and Hindu families that can afford to pay their daughters and sons attend schools are subject to ill-treatment in public places like schools and universities.

“When I was at school, my classmates used to tease me,” Weki recalled memories of his primary school. “They used to call me potato, and eggplant.”

Kartar Singh, father of six sons, described the first day of his oldest son in university in tears. Singh was walking with his son to university when a by-passer attacked his son who fell down on the ground. “I asked why, and then a group of 10-people gathered and shouted at us, calling us infields,” said Mr. Singh. “That was the first, and last of day of him going to university.”

Afghanistan was not always the worst place for Sikhs and Hindus. 40 years ago, the Sikh and Hindu community used to live in peace and harmony with their Muslim fellows. The Sikhs used to occupy key positions in the government administrations and run major projects in the country.

Kartar Singh recalled a golden era when Sikhs and Hindus were occupying top government posts. Under King Zahir Shah, Devin Narinjan served as finance minister of Afghanistan. Several Hindus and Sikhs were serving in hospitals as doctors and nurses under the reign of Dr. Najib.

The civil war forced thousands of educated Sikhs and Hindus to flee the country. The entire educated population of Sikh and Hindu community sought asylum, and a small number of them stayed in the country, hoping that situation will get better for them.

The remaining educated Sikh and Hindu were wiped out by a suicide bomber in eastern Jalalabad city, the provincial capital of Afghanistan’s Nangarhar province. In July 2018, a suicide bomber detonated his explosive, claiming lives of 19 Afghan Sikhs.

The suicide bombing wiped out the entire educated community of Sikh and Hindu, including Awtar Singh Khalsa, a civil activist and the only Sikh candidate running for 2018 parliamentary election.

Following the attack, the Sikh and Hindu community looked for another candidate. They initially tried to find a candidate with a university degree but in vain.

Finally, they chose Narander Singh, Awtar Singh’s son, to represent them in the Afghan parliament. It is sad to say that Mr. Singh, who represents his community in the parliament, can neither read nor write.