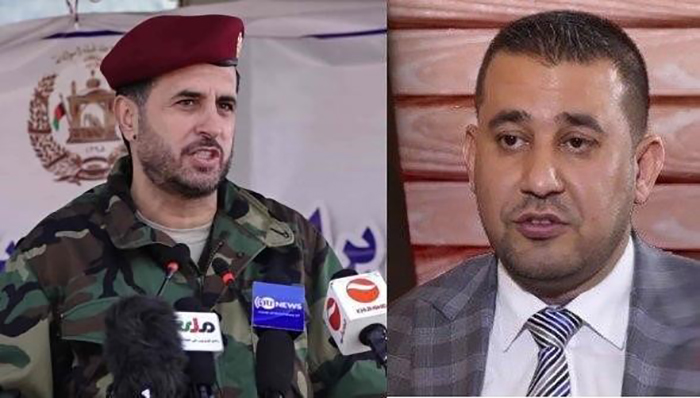 Acting minister of defense, Asadullah Khalid, and head of the National Statistics and Information Authority (NSIA), Ahmad Jawid Rasouli, will face a one month pay cut for violating the Access to Information Law following the daily Etilaatroz and Pajhwok News Agency filed a complaint against the officials.

In a press conference held on Tuesday, September 01, the Access to Information Commission (AIC) announced that the two officials were punished with the salary deduction for avoiding to provide information requested by the daily Etilaatroz and Pajhwok News Agency. Addressing the conference, the AIC Chairperson, Ainuddin Bahodury, stated that all the authorities are obliged, as predicted in Afghanistan access to information law, to share the information with the public or for those who request it.

According to Bahodury, the Ministry of Defense (MoD) has hesitated to share copies of the contracts it had struck with Mujtaba Ali Technical and Construction Company for eight procurement projects with the daily Etilaatroz while the NSIA and MoD have denied sharing copies of Ajmal Ahmadi’s – acting governor of the central bank – tazkira and identity documents upon official request by Pajhwok News Agency. Bahodury asserted that the two institutions have, therefore, violated the 1st clause of Article 8 of the Access to Information Law.

As AIC authorities said, the commission asked MoD and NSIA to provide the requested information for the two media outlets after it conducted a thorough assessment of the complaints filed with the AIC but in vein. “These two institutions have not responded to the requested information despite repeated calls made by the [AIC]’s complaints department and violated the commission’s official decision,” the AIC noted. As confirmed by AIC officials, Etilaatroz filed its complaint on October 06, 2019 and Pajhwok News Agency registered its complaint on February 05, 2020.

Describing the treatment of the two government agencies as a “violation of the access to information law”, the AIC has officially requested in a letter addressed to the agencies and Presidential Office for a one month salary cut for acting defense minister and head of the NSIA as a punishment.

Bahodury further noted that such behavior and hesitation to share information will bring the government’s accountability and will pave ground for corruption within the government. “Escaping the law undermines the spirit of the public participation, rule of law, and information sharing culture which leads to autocracy within state agencies,” the AIC Chairperson asserted. He further went on to call on the MoD and NSIA to assure the AIC of implementing the recently made decision within seven working days and provide the requested information for the media outlets.

He warned that the two government agencies would be officially introduced to the Attorney General Office for prosecution, if still tried to ignore the AIC’s decision. Bahodury also claimed that some other government institutions, including the Supreme Court, are also reluctant to cooperate with the media in sharing the required information.

Robina Hamidi, a female journalist, complains that government spokespersons are often hesitating to share the required information “timely” and do not respond to journalists’ calls.

Arif Amini, who works with Rouydad News, accuses the government institutions of violating the Access to Information Law. “Government institutions reply a day or two days later when we ask for information,” he says, adding that it causes some reports to remain unpublished which, in turn, provokes  media managers to pressure journalists.

“Journalists are not only facing the challenge of access to information, they also face double standards by spokespersons and some ministries,” says Hamid Ibrahimi, who is a journalist with 1 TV Network, accusing some government institutions of biased behaviors towards journalists and media.

Pronouncing biased behavior of government agencies as “unacceptable” officials of the AIC asked journalists to introduce any government institutions to the AIC for if they hesitate to provide the required information.