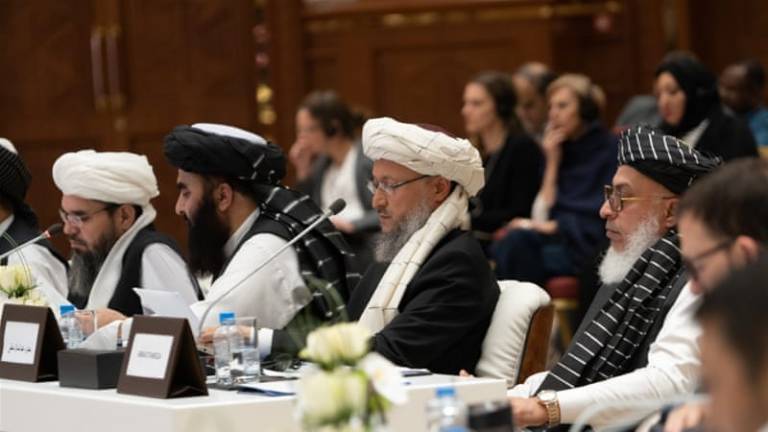 Nearly after a month delay, the Afghan government has finalized a 21-member negotiating team that will represent the government in the intra-Afghan talks with the Taliban. The negotiating team was supposed to be finalized earlier but was delayed for multiple reasons, notably a political crisis over formation of an inclusive government that continues to challenge the legitimacy of a new and largely disputed government-led by Ashraf Ghani.

A 21-member negotiating team, including five women, reveals at a time when President Ashraf Ghani, under pressure by Washington, has held video conferences with Doha-based Taliban leaders to discuss what the US peace envoy Zalmay Khalilzad, described as ‘technical aspect’ of the intra-Afghan talks. Following video conferences held between Afghanistan’s government and the Taliban’s Qatar office, Suhail Shaheen, a spokesperson for the Taliban’s Qatar office, wrote in a series of tweet that the two sides had agreed upon release of 5,000 Taliban prisoners, who are under custody of the government.

Earlier, days after the US-Taliban deal was inked, the new administration under Ghani announced it would release Taliban prisoners on certain conditions. Abdul Salam Rahimi, the Afghan state minister on peace affairs, repeatedly underlined that the government would release 5,000 Taliban prisoners in phased manner, a decision that was rejected by the Taliban, calling it against the agreement signed between the group and the United States on February 29, 2020.

Abdullah has not commented regarding the composition of the team so far. A statement, issued by the state ministry on peace affairs on Friday, said, President Ghani “wishes the delegation success and calls on them to consider, at all stages of negotiations, the best interest of the country, the shared values of the Afghan people, and the principle stand of the country for a united Afghanistan”.

The negotiating team will be led by Masoom Stanekzai, who is an ethnic Pashtun and shares tribal ties with the Taliban. Mr. Stanekzai, who chaired Afghanistan spy agency (NDS) for years, is seen as a Pashtun elite who is close to Ashraf Ghani and maintains a good tribal clout among tribal Pashtun elders and some Taliban leaders.

Sharifa Zurmati, an ethnic Pashtun, is also on the list. Ms. Zurmati is picked to represent Afghan women in talks with a group who have shown no flexibility to change their attitude towards women in the areas under their control.

Habiba Sarabi, an ethnic Hazara woman, who is the deputy head of the High Peace Council (HPC), has also been picked as member of the negotiating team. Ms. Sarabi has served as first ever female governor in the history of the country. She is picked to talk on behalf of women in the talks.

The delegation includes Batur Dostum, a son of General Abdul Rashid Dostum, who is a powerful leader of the ethnic Uzbek of Afghanistan. The powerful General is an arch foe of the Taliban. The young Batur Dostum is going to attend a talks with old-minded Taliban leaders most of whom are paranoid of ethnic Uzbek fighters.

Khalid Noor, son of Atta Mohammad Noor, an ethnic Tajik, who is the chief executive of Jamait-e-Islami of Afghanistan, a Tajik-dominated political party, also includes in the team. Mr. Khalid Noor, whose father is a supporter of Ashraf Ghani, has little practical experience in the business of Afghan politics—which traditionally has been shaped by old tribesmen and elderly tribal leaders.

Kalimullah Naqibi, an ethnic Pashtun, who is the deputy head of Jamiat-e-Islami party, also includes in the delegation. Mr. Naqibi is a close ally of Atta Noor.

Rasoul Talib, an ethnic Hazara, who is adviser to the president, also includes in the negotiating team. Mr. Talib is close to Sarwar Danish, the second vice president of Afghanistan.

Enayatullah Baligh, an ethnic Tajik and a member of the Ulema Council, is also on the list. Mr. Baligh, who has served as Imam of Pul-e-Khishti mosque, is a hardline mullah who shares common ideological values with the Taliban. In the intra-Afghan talks, Mr. Baligh represents a political faction led by Abdul Rab Rasul Sayyaf.

Mohammad Natiqi, an ethnic Hazara, who is a former Afghan diplomat, is also a member of the negotiating team. Mr. Natiqi is a close ally of Mohammad Mohaqeq, an influential Hazara leader.

Abdul Hafiz Mansour, an ethnic Tajik, who is former MP, also includes in the delegation. Mr. Mansour, who has authored book, is a soft-spoken intellectual who follows Islam and history of Afghanistan. He is close to Abdullah Abdullah.

Among other women delegates includes Fatema Gailani. Ms. Gailani is member of the Gailani family who are well-respected in Pashtun society. She is close to Hamid Gailani.

Amin Ahmadi, an ethnic Hazara, who is a sophisticated university lecturer, also includes in the team. Mr. Ahmadi has authored books and essays on Islam and culture. He has translated a book and number of papers on human rights. He is close to Karim Khalili, another influential Hazara leader.

The last woman among the delegates is Fawzia Kofi who formerly represented Badakhshan province in the Afghan parliament. An ethnic Tajik, Ms. Kofi is a vocal critic of Taliban style of governance, in particular their behavior against women. She is believed to be close to Amrullah Saleh, the first vice president of Afghanistan.

It is not clear when and where the intra-Afghan talks begin, given that communication and international flights are disrupted by the pandemic coronavirus. The Afghan government is facing a hard time, with squabbling political crisis over an inclusive government remains unsettled and Washington puts more pressure on Ashraf Ghani to agree to differ with the Taliban insurgents and other political rivals at home. Under the US-Taliban deal, Washington would facilitate the intra-Afghan talks in which a delegation, led by the Afghan government, sit with the Taliban representatives to discuss the future of the country.