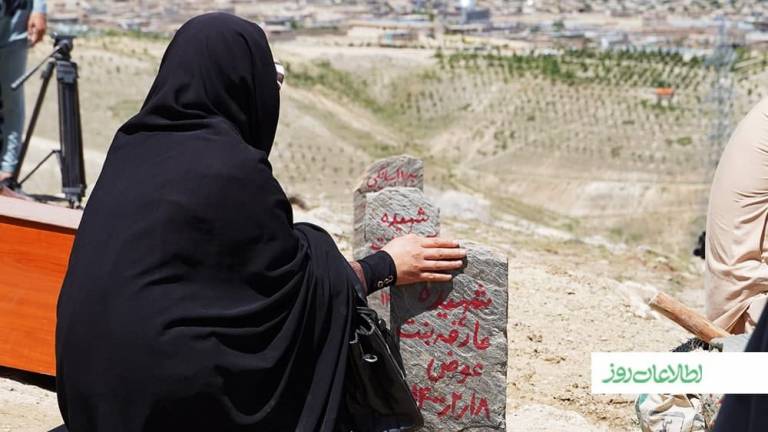 A woman sitting next to grave a girl student who was killed in school bombing in Kabul on May 08.

Minister of Foreign Affairs Mohammad Haneef Atmar has asked the International Criminal Court (ICC) in Hague to launch an investigation into war crimes committed in Afghanistan from 2003 onward. Atmar has said that the Afghan government was prepared to fully cooperate with ICC’s investigation into Afghanistan’s case. He urged the ICC to begin its investigation with the recent school bombing of Kabul which killed at least 85 and wounded 147 people, mostly school girls.

Leading a 15-membered high-level delegation, including the Minister of Justice and Afghanistan’s Attorney General, Mr. Atmar paid a visit to The Hague aimed at meeting with prosecutors of the ICC and discussing the ICC’s investigation into Afghanistan’s case.

Speaking at a press conference on Monday night, May 10, Atmar said that he had met with the ICC’s Prosecutor Fatou Bensouda, urging her to launch an investigation into Afghanistan’s case.  “Mrs. Bensuda, the court’s prosecutor, was deeply saddened by the incident [that] took place in Dasht-e-Barchi. We told that the Afghan government is ready to ask you to work with us and start the investigation from Dasht-e-Barchi’s incident,” he briefed his meeting with Fatou Bensouda.

As many as 85 people, mostly schoolgirls in their teens, were killed and 147 others wounded as a result of a car bombing followed by two other landmine explosions targeted Sayed ul-Shuhada High School on Saturday, May 08, around 04:30 PM in a western neighborhood of the capital Kabul.

The Afghan government blamed the Taliban for the attack but the group rejected it.

Lunching a probe into the school bombing is aimed at finding the perpetrators, noting that finding out the perpetrators is the responsibility of the Afghan government and it will do that, Atmar said. “The perpetrators of this incident did not emerge [immediately] from the sky. They have come from somewhere where they were tasked and provided with money, [explosive] materials, and facilitation for the attack. They committed the crime.” The Afghan justice and judicial organizations are now fully responsible to find these criminals and bring them to justice, he underlined. “We want the ICC to be involved in this process as well.”

The deadly bombing sparked widespread national and international condemnations. Some political figures even went further to term it as a “genocide” and some human rights organizations stated that the incident needs to be investigated independently by an international organization.

Describing the school bombing as a clear manifestation of “genocide”, the Second Vice President Sarwar Danish wrote that the terrorists targeted a specific ethnic group with specific beliefs. “This catastrophe has been aimed at [committing] genocide and removal of a social mass (ethnic group),” the Vice President noted.

Afghanistan Independent Human Rights Commission (AIHRC) has called on the UN to launch a probe into the school bombing and similar massacres committed in Afghanistan. “Secretary-General António Guterres should call for an inquiry into civilian casualties which have occurred as a result of a variety of types of violence and in a variety of places – including mosques, gurdwaras, hospitals, schools, universities and tutoring centers,” the AIHRC said in a statement issued on Sunday, May 09.

Afghanistan got the ICC’s membership in 2003 which allows the court to investigate crimes committed in the country since 2003.

According to the foreign minister, the ICC’s prosecutor has expressed interest in cooperating with the Afghan government to investigate and prosecute crimes committed in Afghanistan after 2003. “The Afghan government proposed for the ICC to have a permanent and active oversight in investigation processes. The Court’s suggested to monitor all measures taken by our justice and judicial organs and help [us] in investigation processes,” Mr. Atmar said.

He added that the two sides have agreed to share all information related to crimes and form a joint oversight body to investigate them. According to the foreign minister, the Afghan government has so far handed over 180 cases as instances to the ICC. “The cases we handed over to the Court are high-profile cases in different categories. We have shared a large number of cases of [crime committed] by Daesh (Islamic State Khurasan Province), the Taliban, and even of the foreign troops with the court.”

The US is not a member of the ICC and does not recognize the court’s authority to prosecute its citizens arguing that such an act is threatening the US national sovereignty. However, Mr. Atmar clarified that it cannot exempt the US soldiers from being prosecuted for the crimes they committed in Afghanistan because the United States is obliged into letting investigation of crimes committed by its soldiers in Afghanistan as per the Bilateral Security Agreement signed with Afghanistan.

According to the foreign minister, the ICC has been working on how to cooperate in investigating criminal cases with the Afghan government since a year ago.

Meanwhile, UN Security Council has said that terrorism in all its forms and manifestations constitutes one of the most serious threats to international peace and security.

“The members of the Security Council underlined the need to hold perpetrators, organizers, financiers and sponsors of these reprehensible acts of terrorism accountable and bring them to justice.  They urged all States, in accordance with their obligations under international law and relevant Security Council resolutions, to cooperate actively with the Government of Afghanistan and all other relevant authorities in this regard.”