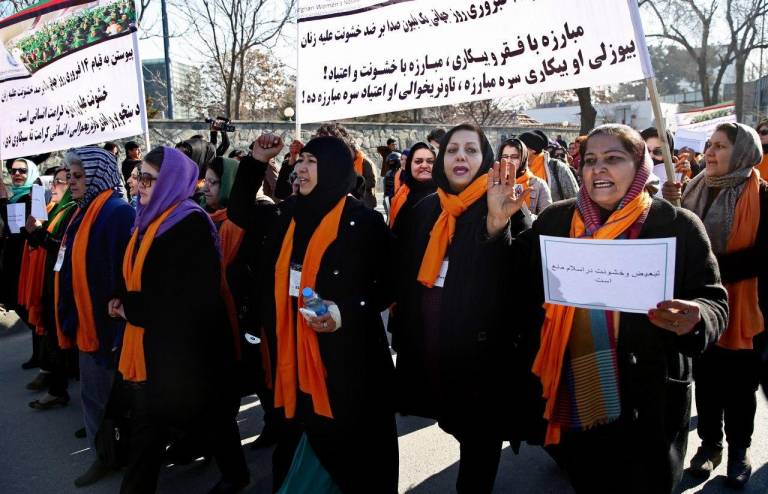 Afghan women hold demonstration, in Kabul, to protest violence against women. The launch of U.S. peace talks with the Taliban, last year, startled many women in Afghanistan.Photograph by Massoud Hossaini / AP
KabulNow·October 13, 2020

Women rights activists in Afghanistan express concern about their future as peace talks are underway in Doha, Qatar. Speaking at a webinar hosted by Afghan Institute of Strategic Studies (AISS), some women rights activists expressed concerns over future of their rights at a time when the country is discussing a power sharing deal with the Taliban.

Shahrzad Akbar, chairperson of Afghanistan;s Independent Human Rights Commission (AIHRC), who was speaking at the webinar, titled Peace Process and Women’s Rights, said the number of women in the government-led peace delegation is not sufficient given that women make estimated half of the population in Afghanistan.

There are four women in the 21-membered Afghan delegation.

Women’s rights is one of the contentious topics on the table talks with the Taliban. The Taliban representatives in Doha repeatedly say that they would respect women’s rights in the light of Islamic sharia but the party’s rank and file are opposing women’s rights publicly.

Nahid Farid, a MP who represents Herat province, speaking on the occasion, underlined that there are no guarantee whether the ongoing peace talks with the Taliban will put an end to bloodshed and war in the country. MP Nahid called on women to stay united and rally behind a united women cause.

Ariana Saeed, a popular singer, who was also speaking at the webinar hosted by AISS last week, put emphasis on an urgent need to mobilize women for women cause.

Urban areas of Afghanistan have changed much since 2001, the year when the US-led collation forces topped the Taliban regime. Thousands of Afghan women are doing their graduate studies. Women work in some key government posts, and a sizable number of them are running businesses.

Under the Taliban, Afghan women endured the worst kind of persecution. The Taliban closed down girl’s schools, banned women from education and forced them to wear hijab. Under the Taliban regime, women were not allowed to come out of their house without a male relative.

Alison Miriam Davidian, deputy head of UN Women, who was also on the panel, noted that the Taliban have agreed to respect women’s rights but there are a number of challenges ahead of Afghan women. She urged women representatives in the Afghan delegation to stay firm in protecting women rights and achievements the country has gained over last 19 years.

Concerns over women’s rights are high as a number of extremist group have already undertaken tough policies against women.

On January 15, a number of banners were erected in Guzargah, Herat, which read an anti-women slogan. Women’s hijablessness depicts men’s embarrassment, the banner read. Mujib ul Rahman Ansari, an influential conservative cleric was behind this move. In video which went viral on social media, Ansari accused the government for being incompetent to fight moral corruption. He urged for a tough religious policing system to control Herat society.

Ansari’s move was followed by criticism.

Ali Kaveh, a professor in Herat says that call for vice and virtue style of policing is residue of medieval age during which religious leaders were in-charge of every segment of social life.

Aziz Hakimi, a freelance journalist, wrote on Facebook that religious codes are not law and no one has the right to enforce religious code instead of law. “Wearing veil is a personal choice, it is not compulsory for women wear veil in Afghanistan, [and] forcing a woman to wear veil is both illegal and a crime.”

In an interview with BBC Persian, Mr. Ansari defended his action and thoughts. He said Afghanistan should have a ministry of vice and virtue.

A number of Herat residents, however, blame local authorities for being silent against Ansari’s stance. Abdul Qayyum Rahimi, governor for Herat, once speaking at press conference said the he would not confront Mr. Ansari for they were ‘friends’. “We cannot silence people’s thoughts; [it] is against freedom of expression”.

Women rights activists in Herat, however, have been struggling for equal rights. On July 05, 2017, a small group of women in Herat launched an online hashtag campaign titled as #WhereISMyName.

The main aim of this campaign was to include mother’s name in national ID cards and give them legal authorities to get ID cards and passports for their children without needing the permission and presence of their husbands.

On September 17, President Ghani passed a decree which allowed inclusion of mother’s name in ID cards but it was kept as optional. This has raised concerns of a large number of women rights activists.

Last month, Herat Directorate of Haj and Religious Affairs handpicked a scout of vice and virtue to keep an eye on daily public activities in public spaces including cafes, restaurants, and shopping centers.

Afghanistan’s women are facing a tough time and uncertain future given the ambiguity in Taliban policy on women’s rights. The Afghan government has been insisting that a republic system which will be committed to women’s rights, constitutional rule and democracy, is government redline in talks with the Taliban.