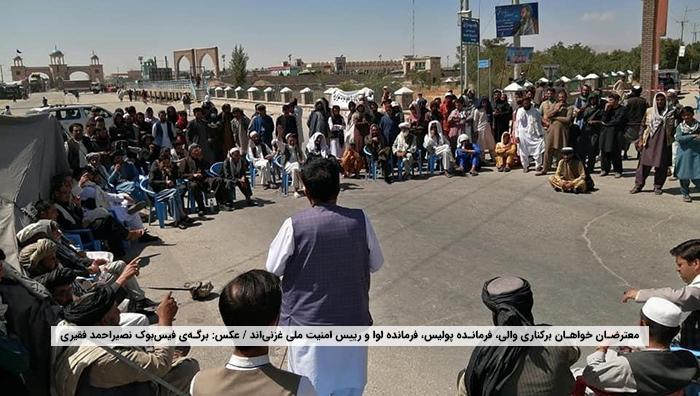 A number of people in the southern Ghazni city have taken to the street to protest against a growing insecurity in the province. The protesters say that local security authorities have fallen short to protect public life, and end crimes, particularly kidnap by the Taliban fighters.

Mohammad Ibrahim Amiri, another protester, says that most recently security situation in Ghazni has worsened as a result of weakness and flaw of local government leaders. “Reforms need to be brought in leadership of local government.”

The southern Ghazni province is restive. The Taliban militants control a large swath of territory in this province. The road which connects Ghazni city to the Hazara populated districts of Nahor, Jaghori and Malistan is controlled by the militants who often stop cars and take passengers down and interrogate them for several hours.

Last week a Taliban-planted mine hit a supply convoy of police in suburb of Ghazni city. The blast followed by a Taliban gunfire eruption which left Sergeant Mashal Hakimi wounded and forced the Afghan police to leave the area.

Surrounded by Taliban fighters, Sergeant Hakimi, taking position in a pit, resists against Taliban fighters. He makes repeated calls to Ghazni police headquarter, asking for help and rescue assistance but in vain. Receiving no reply from police headquarter, Hakimi makes call to his father, crying for help and rescue. His father asks local elders to help his son relieve from Taliban siege. The local elders make repeated calls on local security leadership and governor but to no avail. Sergeant Mashal Hakimi loses his life after 13 hours of painstaking resistance against Taliban fighters.

A number of angry Ghazni residents have stood behind the Hakimi family. They started their protest rally four days ago and have closed Kabul-Kandahar highway since Friday, September 04, saying that they will not open the highway if the central government does not address their demands.

Abduljameh Jameh, a member of Ghazni provincial council, says that the Taliban have control over seven districts in Ghazni province.

On the other hand, a local source told Kabul Now that seven Afghan security forces have surrendered to the Taliban in Ghazni’s capital city and Andar district the province. The seven forces who were not being protected by the government surrendered to the militant group on Saturday, August 05, the source confirmed.

The latest surge in Taliban attacks comes at a time when the group and the Afghan government are preparing to negotiate a peace settlement. The Afghan security officials claim that Taliban carry out tactical attacks to gain more concession on peace table.