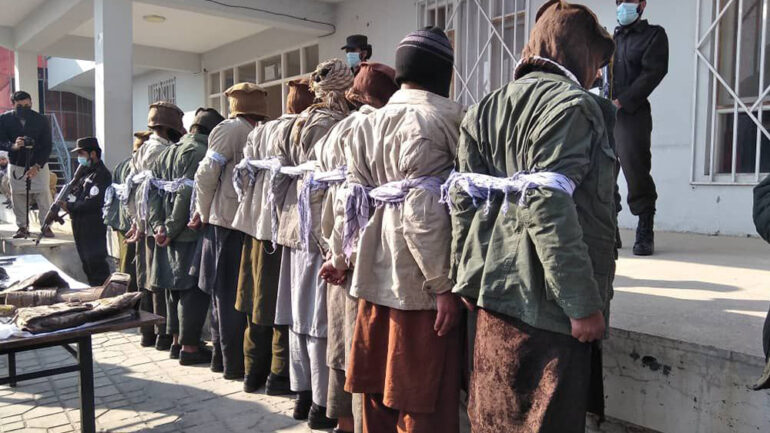 Photo released by the Taliban on scale media claims to show the detained NRF and AFF fighters.
KabulNow·January 5, 2023

The Taliban claims its forces have detained as many as 57 fighters of the National Resistance Front (NRF) and Afghanistan Freedom Front (AFF), including three senior commanders, over the past week, in northern Afghanistan.

A source in the Taliban’s intelligence agency in the northeastern Takhar province said that they detained the NRF commander, Azimullah Warsaji, and 7 of his fighters in Warsaj district on Friday 30 Dec 2022. The source added that a group of 39 NRF fighters and their commander, Faizullah, were captured 2 days earlier in Taloqan. Farkhar, Warsaj, and Chahe Ab districts of the province, and taken to Taliban prison in Taloqan, the capital of Takhar.

Moreover, the Taliban police chief in the northern Baghlan province, Jan Mohammad Hamza, confirmed to KabulNow that his forces intercepted and detained a group of 10 anti-Taliban fighters heading for Tajikstan, which included 6 fighters of Afghanistan Freedom Front (AFF) and their commander, Dawood Khatar.

The National Resistance Front, led by Ahmad Massoud, and the Afghanistan Freedom Front have not yet commented on the detentions of their fighters. Both organisations have been fighting the Taliban in the north and northeastern provinces of Afghanistan.