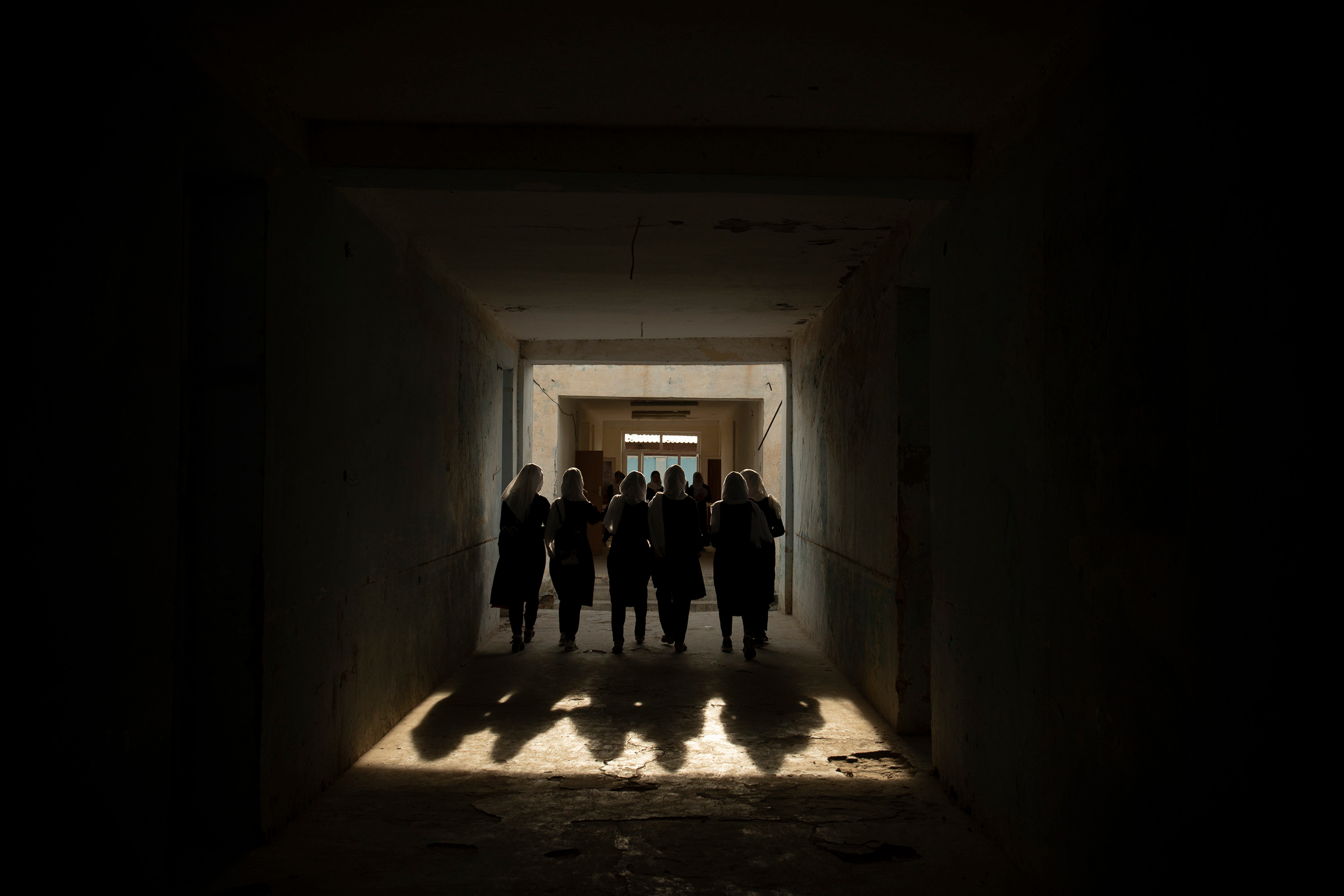 Darkness Returns: The shattered hopes of women and girls in Afghanistan

On December 20, 2022, the Taliban Ministry for Higher Education banned women from universities. They had already banned girls from secondary school education. KabulNow has interviewed some of the students impacted by the latest ban.

The dinner was over. Negin was washing the dishes in the kitchen. Her uncle, Basir Ahmad, and her two brothers were browsing the social media on their phones. Her mother was in the other room offering her evening prayers. She lost her father in a car accident when she was 14. Negin had set her mind to revise for her next day exam till late that night. She was relieved her chores were over.

The post-dinner lull in the living room was broken by Basir Ahmed. “Oh, here is some news on Facebook. The Taliban have banned girls from universities,” he shouted out, laughing sarcastically. Since her father’s death, Basir Ahmad had been against Negin going to school, always telling her that she should think about marriage instead of getting an education. Anxious about her exam, Negin thought her uncle must be joking or teasing her. “Uncle, please don’t joke,” she retorted. Agitated at Negin’s response, “I am not joking,” he shot back.

The news was shocking and unexpected. Negin asked her brother, Dawlat, to check if the report was correct. Dawlat zoomed in on an official letter from the Taliban’s ministry of higher education circulated on social media. “Here you go!” said Dawlat rotating the mobile screen before her sister’s eyes. Negin wiped her strained eyes and focused on the mobile’s screen.

The letter, signed by the group’s minister for higher education, Neda Mohammad Nadem, ordered all public and private universities to shut their doors to women with immediate effect.

For Negin, the news was shattering. She felt numb and began shaking uncontrollably. She had only a few hours the night before and studied tirelessly all day to prepare for her take her one last exam before graduating as a doctor. She had fought against all odds and overcome the challenges she had faced. Now all in vain. Her hopes and dreams ruined. She had worked hard to gain a scholarship at a private medical school. Without it, her family could not afford her tuition fees. Becoming a doctor had been the driving force of her life, she says.

Negin had finished school in a remote village in Baghlan province. Her late father, she said, had been supporting her schooling. Her family moved to Kabul after her father’s death and due to lack of security. In Kabul, she had to fight for her family’s approval to go to school. Then, there were the almost daily harassments in the streets.

Life as university student hadn’t been easy. Female students would routinely get harassed and cat-called by male students and lecturers. But Negin had preserved. Her determination and passion to make hers and her late father’s dreams a reality kept her going. Now the Taliban ban ruined everything.

Negin is just one of the millions of girls affected by the Taliban’s decision. “It feels like a death sentence,” she tells us. Women and girls are not only banned from having an education, but from all public spaces. “We are banned from restaurants, parks, women only bathhouses, bazaars, taking a taxi on our own, schools, tuition and language centres, and now universities. We are being suffocated.”

Gul Nazar is a student at Kabul University. She lives in a dimly-lit and humid room with five other students in western Kabul. Like her, all her roommates come from remote provinces. They pay a monthly rent of 1500 Afghanis each to an ultra-conservative property owner supervising and controlling their every move with strict rules and conditions.

Battery-powered torches can be seen lining the windows. Day-long power-cuts happen frequently, making Gul Nazar and her friends rely on their torches to study at night. Kabul winters are notoriously harsh, especially in old and dilapidated houses without a central heating system. To keep themselves warm, Gul Nazar and her friends cover themselves with blankets as they cannot afford heating costs. Firewood and coal are out of their reach. Despite their challenges, they had preserved and were determined to continue with their studies.

But the ban has made them pack their belongings and the books they have collected over the years and return to their home villages. “I have worked so hard to get here. My parents are poor. I wanted to make them proud. But now I have nothing to show for my their sacrifices. How am I going to live my life, become a housewife?” she tells us, wiping away her tears.

For Gul Nazar and her roommates, university education has been the only way for a better future. But the futures they envisaged for themselves are no more. “I feel suicidal. I have nothing in life to hang onto,” she sobs.

Samira Jaffari, a fourth-year student at Kabul Medical University, heard the news of the ban from a classmate on her way to take her practical exam. Just like Negin, she initially thought her friend must be pranking her and didn’t change course. But as she got close to her campus gate, she saw dozens of heavily armed Taliban fighters blocking the entry to female students. “The men were angry and violent. They wouldn’t answer our questions, only that they were there to enforce the order of their leaders,” Samira tells us. “For me, it is the end of the world,” she adds.

Just like Negin, Gul Nazar and millions of her peers, Samira had to overcome many odds and obstacles. “I look to the sky and ask God why I was born here. The Taliban have turned Afghanistan into hell on earth for women,” she sighs bitterly.

For Samira, the global reaction to the Taliban’s latest assault on women’s rights, doesn’t mean much. “Last time, when they banned girls from secondary schools, the international community did nothing. Nothing will happen this time either. They might as well ask women and girls not to breathe, in case the Taliban get offended,” she says.