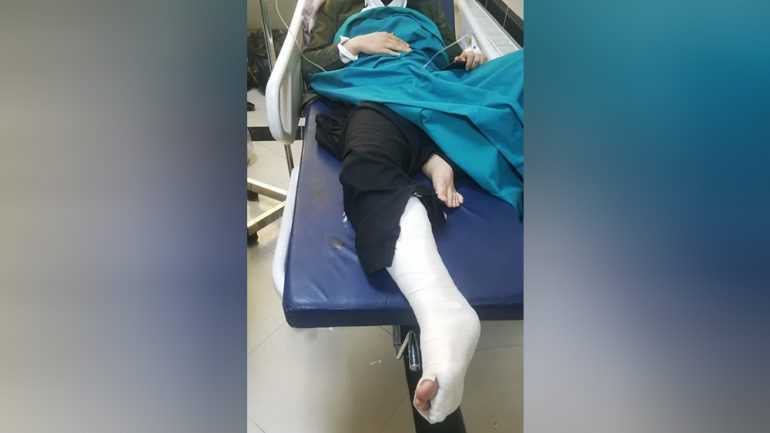 The Taliban security forces have beaten and shot a private university lecturer in the leg for “wearing suit” in the capital Kabul. The institute claimed that the Taliban had previously threatened its staff members that they will “punish” them for their partnership with foreign institutions.

The lecturer, speaking on condition of anonymity, told Kabul Now that he was physically beaten and then shot in the leg in Pul-e-Sukhta neighborhood, PD6 of Kabul city, on Wednesday, November 03.

He detailed that the Taliban forces stopped him while he was on his way to office and then interrogated him for carrying a “bag” and having suit on. “Why are you wearing suit?” he quoted the Taliban security forces as interrogating him on the street.

According to the lecturer and another official of the university, the Taliban security forces have beaten him physically and insulted him before the shooting.

As per his account, the Taliban have fired three bullets aimed at him one of which has hit his leg. After the shooting, the people have transferred him to a hospital. He has undergone a surgery operation and is currently resting at his home.

In a letter sent to media, Kateb Practical Learning Center (KPLC) has claimed that the Taliban had previously stormed the institute “violently” and threatened its staff members that they “will punish” them because of their “close partnership” with VANCOUVER TESOL TRAINING CENTER in Canada and Oxford Cert in the UK.

According to the KPLC, the Taliban have concluded that the institute is working with foreigners through checking its advertisements billboards on the streets.

“The Taliban have taken pictures of those ads and came to the department on September 9, 2021. They violently tore our billboards, and took several pictures of the staff members saying that they will punish us just because of our partnership with foreign institutions,” part of the KPLC’s letter reads.

Moreover, the KPLC claims that the Taliban have beaten a number of its staff members in Wednesday’s incident, not just one. In the letter, it identifies the man who got shot in the leg as its director.

“At the moment, he is in his worst possible physical and psychological state and we the staff members are all petrified with fear,” it says about the injured lecturer, urging international organizations to save their lives.

Ahmadullah Wasiq, a deputy spokesperson and minister for the Taliban government, however, has rejected shooting the lecturer for wearing suit.

He added that many government employees in different ministries wear the same cloth and the people are seen with the same attire in different parts of the city freely.