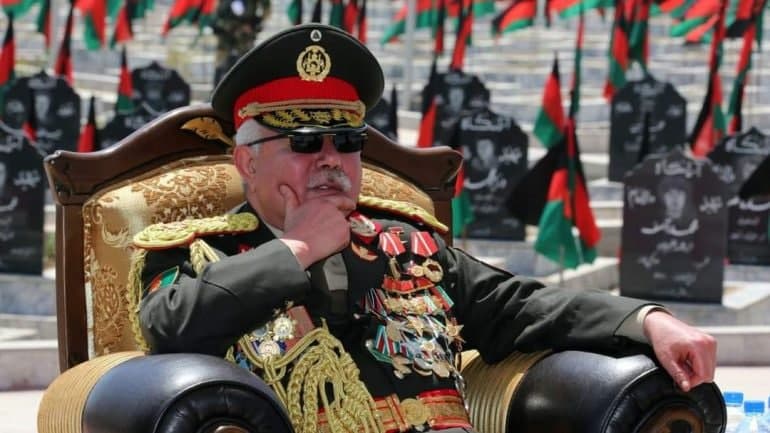 Following the speedy fall of three provincial capitals to the Taliban in northern Afghanistan, Uzbek leader Marshal Abdul Rashid Dostum says that the security situation in the north would change for better soon and the people of Afghanistan would see the “sworn enemy” defeated.

Talking to local leaders and Faryab security authorities in a telephone conversation held on August 08, Dostum said the enemy acts on commands given by foreigners and outsiders.

The Afghan defense ministry has said a clearing operation is underway in Kunduz, a city that is strategically important and is the gateway to the northern provinces of Afghanistan.

The Taliban insurgents accelerated military offensives to capture provincial capitals since May when the US forces began the last stages of withdrawal from Afghanistan.

White House Press Secretary Jan Psaki, quoting US President, said in a tweet that it is the moment for the Afghan leadership to stand against Taliban aggression.

The US embassy in Kabul has said that the Taliban must concentrate on peace process and give up the military course if they want to secure international legitimacy.

As stipulated by the US-Taliban peace deal, the group has to sit with the Afghan government to negotiate a political settlement.

On Sunday evening the Taliban insurgents overran Taloqan, the provincial capital of Takhar province. Taloqan was one of the anti-Taliban strongholds in 1990s. The region won a reputation as an anti-Taliban resistance stronghold in 1990s when the Taliban militants fighting their ways to northern provinces and central Bamyan province.

On the other hand, fierce fighting is reported on the outskirt of Lashkar Gah, with at least 63 insurgents reportedly were killed and 17 more wounded in operations conducted by the Afghan Defense and Security Forces (ADSF), according to the Ministry of Defense.

The insurgents have attacked Pul e Khumri, the provincial capital of Baghlan, and fierce fighting is underway, Ahmad Jawid Besharat, spokesperson for Baghlan police said today, August 09. He said the ANDSF along with people uprising forces have pushed the insurgents.

A local source confirmed that on Sunday evening the insurgents launched an attack on Pul e Imam Bakri area in Mazar e Sharif, the provincial capital for Balkh.

The Taliban has claimed that their fighters have entered Mazar e Sharif from Kot e Barq area.

Mohammad Afzal Hadid, head of Provincial Council for Balkh, told Kabul Now that the Taliban were defeated by ANDSF.

Haji Raz Mohammad, head of Samangan Provincial Council, said that the Taliban attacked Aibak city from different directions that have been repulsed by the ANDSF.