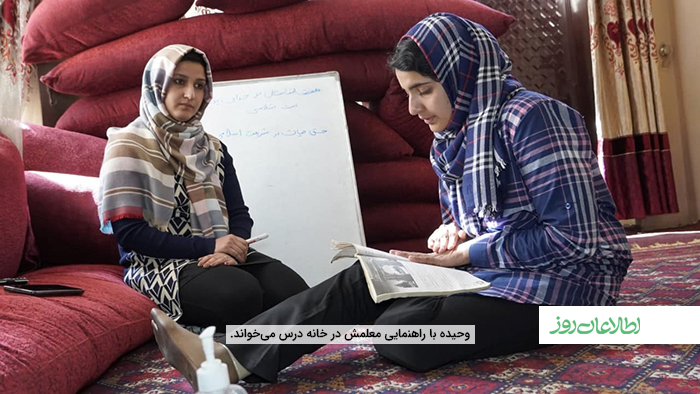 Wahida next to her tutor at her house in Kabul
KabulNow·March 15, 2021

A window of opportunity: ICRC educates Afghan PWDs in their houses

Wahida was clinically diagnosed to have smallpox disease at her birth. To save her life, the doctors had one choice: to cut her foot. Years later, she lost another foot to war. “I was deprived of education nearly for three years after my foot was injured,” she says.

One of several obstacles every Person with Disability (PWD) faces in Afghanistan is a lack of proper access to education. In the absence of proper education facilities, the PWDs in Afghanistan make a high illiteracy rate. The problem grows larger as the dragging war claims more lives and leaves a large population, including children, with disabilities almost on daily basis.

Shoaib and Idress are two brothers who suffer from muscular dystrophy. They are living in a mud house in Khairkhana neighborhood of Kabul city. The brothers also face a serious problem when it comes to access to education facilities.

To address the problem, the International Committee of Red Cross (ICRC) runs a literacy program known as a home-based schooling program. Under this program, the ICRC has hired Arezo Ibrahimi to teach school subjects to Wahida at her house.  Jalaluddin is another ICRC-paid teacher who teaches Shoayb and Idress English language.

In addition to the inherited disease of muscular dystrophy, Shoaib suffers hearing loss too. He can hardly hear through a hearing tool. Six years ago, his feet lost movement. “All of a sudden I became limb six years ago,” he said. His brother, Idress suffers a similar inherited disability. He cannot walk. “I cannot go out. I can only move out to the yard and play,” Idress says.

A window opened in darkness

What worried Wahida a lot was deprivation from education. Four years ago, she saw a number of men and women walking with wands in Karte Sakhi while she was returning from her sister’s house. “I saw persons with disabilities who had wands with the ICRC’s logo. Following that encounter, Wahida went to ICRC headquarter and registered her name in the list of ICRC’s patients under treatment. First, she received two prosthetic legs from the ICRC and then enrolled her name in its home-based schooling program. Wahida studied three school grades through the ICRC’s sponsored program. She is now a 9th school grader. Her teacher, Arezo, takes a long way to teach her at her home.

Shuttling between ICRC’s headquarter and her house, Ms. Wahida has now become interested in physiotherapy and consider it as her future career. “I want to be a physiotherapist. But if not possible, I will study psychology.”

Though there is not any legal ban on children with physical disabilities to enroll at state-run or private schools, biased behavior against them and lack of required facilities deprive them of education opportunities.

“We have three teachers who are very kind. We are fully satisfied with them. They explain the lesson as much as we request. We also study until 09:00 PM,” Shoaib expresses his satisfaction with the ICRC-sponsored program.

I felt tired passing through the zigzagged valleys to reach Wahida’s house in Baraki square of Kabul city. But this is the route her teacher, Arezo, takes six days a week. Earning a bachelor’s degree in psychology from Kabul University four years ago, Arezo joined the ICRC’s home-based schooling program. With a bit of stress occupying her mind, she began to teach the persons with disabilities and motivate them to stand on their own. “I gradually associated with my students and we are a family now,” she says.

Eight years ago, Jalaluddin joined the ICRC’s home-based schooling program. He has gone through many hardships and difficulties in shuttling between remote houses belonging to children with disabilities. Going to the remote suburbs of Kabul in Tapa Kachaloo and then making it to the house of Shoaib and Idress in Khairkhana, Jalaluddin enjoys his career as a tutor. He has two bachelor’s degrees in computer science and economics. As Jalaluddin put it, he adores his career despite its hardships and determined to continue it. “Serving the children with disability is serving the [whole] society. I am completely satisfied with my career.”

12 of Jalaluddin’s students have made their way to Afghanistan’s universities to pursue their higher educations. “I have an average number of eight students each year and sometimes it raises to 13 students. I have taught an estimated 50 students over the past eight years and 10 of them have graduated from high school.”

In 1996 after the Taliban captured the capital Kabul, the ICRC initiated a schooling program for the PWDs. As the war continued to injure more, the ICRC decided to cover more areas in the country which includes Herat, Balkh, Nangarhar, Parwan, Kapisa, and Panjshir provinces.

Eisa Tabish, the acting team leader of the ICRC’s home-based schooling in Kabul, says out of six members of the team, four are persons with disabilities. “We have two headmasters with a disability and two supervisors with disability.”

The team members are in love with their career, says Tabish, noting that the program is now more than just a normal education program. “If necessary I work even during the holidays. I won’t leave it for work with better privileges in other places because we have grown and learned here.”

In 2020, of the 194 teachers who worked with the ICRC’s home-based schooling program, 40 were persons with disabilities. A total of 75 teachers are currently busy teaching 94 students through the program in Kabul.

Izmaray Hussaini is a member of the ICRC’s monitoring team who oversight the implementation of its home-based schooling and rehabilitation program. He was disabled by war nearly 27 years ago.

This story has been developed by Eitlaat-e-Roz’s Hadi Khoshnawis and translated into English by Mokhtar Yasa.