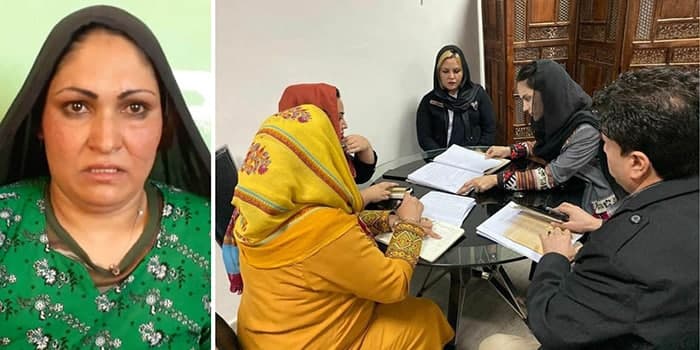 Momina Ebrahimi (on the left) and Fatima Ahmadi,(on the corner in right picture) are two women, who tell a painful story of rape and sexual harassment in workplace
KabulNow·February 7, 2021

Sexual Harassment in workplace: A systematic problem for policewomen

By: Zahra Nader and Aber Shaygan

Momena Ebrahimi, a policewoman, says she was raped by her commander when she refused his demand to sleep with a visiting police official. When she tried to report the crime, a network of local politicians and police officials blocked her efforts.

Fatima Ahmadi, a former policewoman, says she was treated like a criminal after she disclosed a bitter story of sexual harassment in the hands of her superiors.

An NPR investigative report in 2012, revealed policewomen in Balkh province were raped, sexually abused and forced into prostitution by their commanders and male colleagues. However, Afghan government did nothing except denying these reports. Momena Ebrahimi and Fatima Ahmadi’s stories show that the Afghan government failed to establish a safe workplace free of sexual harassment for female employees.

Momena Ibrahimi, 28, the first female police officer in Kejran district of Daikundi, joined the force in 2017. The difficulty of the job was made clear in her fourth day, when three of her colleagues came to her door, warning, “the police force is not a good place for women.” However, for illiterate Momena, joining the police force was the only job opportunity on offer.

Her ordeal began on September 7, 2019, when Mohammad Khan Baloch, Kejran police chief, asked her to sleep with Ahmad Tanwer Hairdari, a Daikundi police official visiting the district, which she refused to comply. Later that night, both men attempted to kidnap her.

She says she had recorded the conversation in which the police chief offered her to the visiting police official, when Baloch learned about this, he snatched her phone at gunpoint, and raped her in the station.

When she tried to report the crime in Kejran district, local officials refused to register her claim. She says the police chief even ordered drivers not to drive her to Nili, Daikundi’s capital. But she used a motorbike to get to Nili, where she registered her complain with five government offices and Afghanistan Independent Human Rights Commission (AIHRC).

That is what she attempted in front of the provincial offices in Daikundi’s capital, but a crowd stopped her. “I wanted to become a lesson, so it doesn’t happen to other girls,” she says in a weeping voice in a phone interview in September 2020.

She appealed the court’s decision. Months later, when she went to the Daikundi provincial council to follow up on court’s decision, she says Shaima Mohammadi, a council member—wife of Ahmad Tanwer Hairdari—and her bodyguards beat her, which left five bruises on her body, according to a copy of her medical report.

“She entered my office in uniform, and disrespected me,” says Mohammadi, denying beating Momena.

After she refused Mohammadi’s offer, Naqibullah Malistani, Daikundi’s deputy police chief, deceived her, by writing a letter on her behalf. “I told him that I am illiterate, don’t betray me,” Momena remembers saying to Malistani.

The Daikundi’s deputy police chief took Momena’s fingerprint on a letter he wrote and asked her to deliver it wherever she registered her claim. Two provincial council members—Mohammadi, Haidari’s wife and Ibrahim Rahmani Baloch, a relative of the Kejran’s police chief—accompanied her.

However, both council members denied paying Momena, although Mohammadi said, if such a claim was true, it is normal to settle it with money.

The only independent organization observing the case, Afghanistan Independent Human Rights Commission (AIHRC) had reproduced the government account of Momena’s case. AIHRC has failed to sound the alarm about the abuse of power by local officials and the council members in its report.

When we raised the questions, an official at AIHRC confirmed, AIHRC knew about the “political pressure” by the council members and the deception but did not report it because, it did not “affect” its investigation and observation of the case. However, AIHRC report indicates that the “political pressure” did affect AIHRC observation and conclusion.

Momena is not the only officer who publicly spoke about sexual harassment in the police force. Fatima Ahmadi, a former policewoman in Kabul, talked about her experience of sexual harassment by her superiors in a video posted on social media. “I have complained about it, but nothing had happened, instead I was fired,” she says in the video.

In an interview with Kabul Now she regrets her decision of speaking out against sexual harassment in her workplace; she was not only treated like a criminal, but she was forced to leave her home in Afghanistan, fearing threats imminent to be posed by strong policemen or their networks.

After her video went viral on social media, MOI investigated her claim. The result of the investigation criticized Ahmadi for “disorderly” conduct. The ministry’s statement seems to focus on the conduct of Ahmadi, rather than her complaints of sexual harassment. “She does not have any evidence to prove her sexual harassment claim against her colleagues,” tweeted Hosna Jalil, a former deputy minister, “therefore, her claim is a lie.” But the AIHRC’s investigates found Ahmadi’s claim to be true.

MOI antiharassment policy orders victims to provide evidence such as “written documents, images, audio, and signs.” If they fail to provide evidence, their claim would be disregarded as lie and they might face disciplinary punishment. Moreover, victims of sexual harassment cannot file claims anonymously; they must include their names, position, place of work and contact information. Furthermore, it gives a limited timeline: employees have three working days to voluntarily drop the case; five working days to present herself to the investigation committee; and ten working days to appeal the decision. These requirements not only discourage female officers from coming forward, but it creates barriers for victims who wish to come forward.

As per this policy, sexual harassment complaints would be investigated by two commissions, one in MOI (Kabul) and one in each provincial capital. The former is chaired by the first MOI deputy minister and the latter is headed by the police chiefs—positions often hold by men.

Many female police officers who depend on their salary, cannot afford to come forward with accounts of sexual harassment. They fear repercussion, losing their jobs and their family reputation in society.

Despite $1 billion investment on women’s empowerment in Afghanistan in the past two decades, policewomen do not have access to a workplace free of sexual harassment, nor a procedure that guarantee investigation and punishment of abusers. The number of women in police force reach 4,065—far from 5,000 that was promised to reach by 2015. At the Geneva conference in 2020, the Afghan government committed to hire an additional 6,000 policewomen over the next four years—a promise that seems impossible if the government continue to ignore the systematic sexism and gender discrimination in workplace.

Momena Ebrahimi and Fatima Ahmadi’s stories indicated the huge obstacles policewomen face in Afghanistan; it revealed the failure of the government in providing a safe working environment for policewomen and mechanisms to protect victims of rape and sexual harassment.