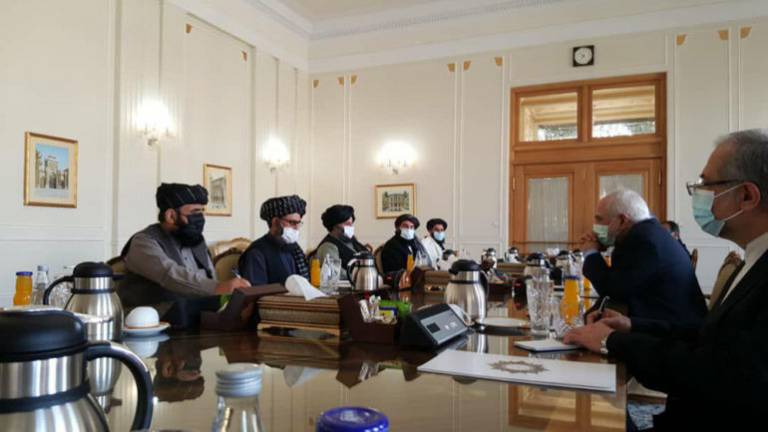 The Taliban deputy leader and head of the group’s political office in Doha, Mullah Abdul Ghani Baradar and his accompanying delegation have met Iranian foreign minister, Javad Zarif in Tehran, on Sunday, January 31, the Taliban and Iranian media reported.

According to Mohammad Naeem, spokesperson for Taliban’s Qatar office, the meeting was held in a good atmosphere where the two sides discussed a range of issues, inter alia intra-Afghan negotiations and full implementation of US-Taliban agreement.

Citing Mr. Zarif, Press TV, which is an Iranian state-owned TV Network, reported that the Iranian foreign minister, meeting the Taliban delegation, said that Iran supports formation of an Islamic government which represents all political groups and factions of Afghanistan. “We support an inclusive Islamic government, which incorporates all ethnicities and religions, and consider it a necessity for Afghanistan,” Zarif was quoted as saying.

“The people of Afghanistan are your people and should not be targeted in any operations,” Zarif has told the Taliban who are currently waging war against Afghan security forces but avoid attacking the US-led NATO troops in compliance with the group’s peace deal with the United States signed late in February 2020.

Moreover, the Iranian top diplomat has asserted that Washington is not a good mediator and peace broker in Afghanistan.

The Taliban’s deputy leader meeting with Mr. Zarif comes few days after their meeting with Iran’s secretary for the country’s Supreme National Security Council, Ali Shamkhani, which provoked criticisms and reactions in Afghanistan. After meeting the Taliban delegation, Mr. Shamkhani said in a tweet that he found the group’s leaders “determined to fight the United States” while accusing the US of prolonging war in Afghanistan.