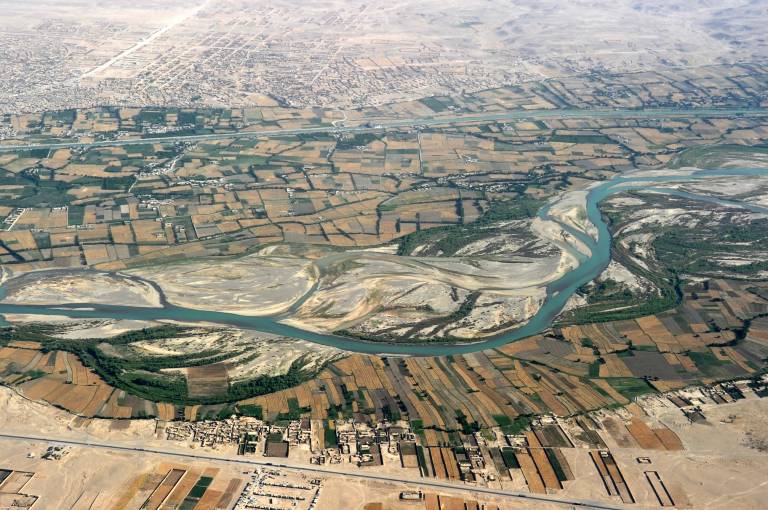 “Abul Fazal! Abul Fazl! Hurry up, bring me the night vision goggle to the backside of the yard

How is our situation?

Alhamdulillah, we are in a good situation, no worries”

It was a radio communication between two Taliban fighters which was heard by an Afghan police officer fighting on the back of a frontline in Arghandab district of the southern Kandahar province. The government forces and the Taliban were engaged in sporadic clashes in an area identified by the police officer as “Joyee Lahore” just few kilometers away from the district center of Arghandab.

Afghan commando forces and policemen were making slow progress in a clearance operation in the district. They had pushed back the Taliban militants few kilometers to the west of the Arghandab river, where they built several security outposts in newly freed areas. Following every boom, the Taliban militants claimed inflicting casualties on Afghan forces in their radio communications. Then, an Afghan army officer would regularly ask from his comrades in the frontlines through radio communication about the situation. “Everything and everyone is ok,” their comrades would respond.

The Taliban do know their radio communications are heard by us, therefore, they give fake casualty tolls of government forces in a bid to weaken our morale and strengthen theirs, the police officer said.

Two and a half month ago, the Taliban militants launched attacks on some districts of Kandahar, inter alia on Arghandab, Zhari, Panjwayi, and Maiwand districts. They control swaths of territories in the province. The clearance operation, as security head of Kandahar police department, Farid Ahmad Mashal, put it, is slow for saving the civilians lives and plenty of landmines planted by the Taliban in civilians’ populated neighborhoods. The local security official told that security forces have so far diffused a total of 611 landmines only in Arghandab and parts of Zhari districts. “For instance, they had planted 18 landmines in a mosque,” Mashal told Kabul Now on Wednesday, January 20.

According to him, the Taliban had gathered forces from several provinces and launched attacks against the districts. Around 550 Taliban militants, including their commanders, were killed and scores of them were wounded in the battles against Afghan security forces, he added.

Latest updates from the ground, as shared by press office of the 205 Atal Military Corps, suggest that 38 Taliban militants were killed in a preventive operation of Afghan defense and security forces. In a statement issued yesterday, Sunday, January 24, the Military Corps added that 17 landmines were diffused, five hideouts and some munition depots of the militant group were destroyed during the operation.

As per account of Mashal, the Taliban have destroyed roads and 480 bridges in the province.

Meanwhile, he further, revealed that at least three military and police commanders, and several other security personnel were under interrogation for they either committed duty negligence or left their strongholds.

The casualty tolls, shared either by Afghan forces or the Taliban, might be a propaganda aiming at demoralizing the opposite sides, what stands out to be a bitter truth is the displacement and huge blows to the public life.

Following the fall of some districts to the Taliban, a large number of the locals fled their homes and sought shelters in capital city of Kandahar and in suburbs of the city. According to chief of Arghandab community council, around 75,000 people have been displaced only from nearly 50 villages of the district.

According to some of the displaced persons, upon capturing the villages, the Taliban force people to leave their homes and then use their houses as strongholds and launch pads against government forces. “We were in our homes when the Taliban came and entered our houses. They told us to get out in order not to be killed in war and bombardments,” says Sayed Kamal Agha, who is a resident of Babur village in Arghandab district.

Kamal takes his 15-membered family and flee his homes as the clashes erupt between the militants and the Afghan security forces. “We fled the war just with our wearing clothes. The house, factory, equipment, clothes, and all other things were left behind.”

He claims that his house and factory were destroyed in aerial bombings conducted by the army forces when the Taliban used them as their strongholds and bomb-making factory. He detailed that the Taliban used his factory’s iron girders for making hideouts and its machines were destroyed as the result of air bombings. “The factory had machines and irons worth four million afghanis. Now I even cannot achieve 10,000 afghanis from it.”

He has not received any assistance since the displacement from his home. The huge losses coupled with concerns of displacement have put him under a huge physiological pressure. “We don’t have money to rent a house for one month, the people here, in the city, ask us to pay six months in advance,” Kamal complained.

The displaced man, who couldn’t speak Persian, tried hard to portray the destruction scenes of his house and factory in Persian. “Boom, Boom, [my] house and factory vanished,” he tried this way which caused other guys around him to burst into laughter. Kamal also then laughed but his pains and sufferings were clearly seen in his eyes. When asked why he laughed, he replied that it was the way he had to deal with the sufferings, adding that overwhelmed by trauma and huge losses to his properties he was forced to go the hospital and seek treatment.

Mohammad Nasim Wolesmal is another man who has been displaced from Qala-e-Shak village of Arghandab district. The Taliban have captured his home overnight and took shield in his house. “They have built strongholds in my house and constructed tunnels from one room to another to use it for waging war against government forces,” he detailed.

The displaced man noted that the local residents were forced to leave their pomegranates on and under the trees for the Taliban launched their attacks while it was the season for harvest collection. The telecommunication service is off in the villages. He has heard from a number of people who have recently come from the villages that their agricultural products have been either destroyed or looted. “No one had remained there except the Taliban. The civilians couldn’t go there. It’s clear that the Taliban destroyed and looted the pomegranate harvests of the people.”

Based on accounts by locals, the war has inflicted on them huge financial losses worth billions of afghanis.

Mohammad Nasim says that he made around one million and 300,000 afghanis each year from his pomegranate harvests. But, this year he has not made even 20,000 afghanis, adding that people would collect around 16 tons of crops in past years. This year, however, the people couldn’t collect a quarter of that amount. “It was the season of cultivating wheat crops. Of hundred landlords, only two or three people had cultivated their crops, the rest couldn’t do it,” he stated.

Haji Hayatullah, a displaced man from Nagan area of Arghandab, has just managed to take out his wife and children when war erupted in the area. Two of his brothers are now missing. He has only heard that his brothers have fled to a dessert. Plus, his properties and house have been destroyed as a result of two mortar shells.

Mashal blamed the Taliban for loss of property inflicted on civilians. He claimed that the Taliban militants have looted the people’s properties, from solar panels to home appliances. The local security official, meanwhile, assured that security forces do their utmost efforts to clear the villages until all the displaced people could return to their homes.

Bilal Ahmad is a 12 years old displaced child from Belal Ahmad village of the district. Just like his family, he says, that all of his friends fled their villages after the Taliban captured their villages. He is impatiently waiting for the war to end until he can again start going to school and pursue his education.

Though it is said that the war has also inflicted civilian casualties but still there is no specific figure. Among the displaced people, everyone was talking of civilian causalities. A man from Arghandab district said that one family has lost three members and two other families have each lost two members in the battle between the Taliban and government forces.

Of hundreds of the displaced people from the war torn districts, a number of them have sought shelter in their relatives’ houses. A large number of them, however, are living in bad condition inside tents or even in open spaces in the cold winter season.

As per accounts of the locals, the government has not provided them with any assistance as yet. “The government employees come here and just waste the time by surveying two or three people each day. Then they go. Whenever we call them, they do not answer.”

This story has been developed by Etilaat-e-Roz’s Abdul Wahid Haidari and translated into English by Mokhtar Yasa.