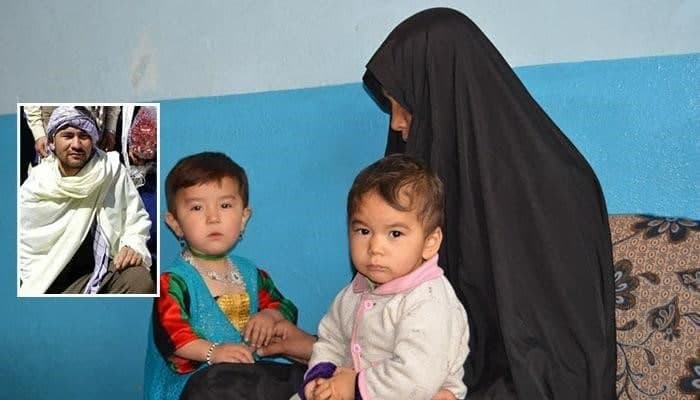 Sara, 26, is single mother whose husband has been killed by the Taliban
KabulNow·December 28, 2020

Looking back to a painful recollection

On the first death anniversary of her husband, Sara, a mother of two daughters, was forced to leave her home. Upon the death of her husband, her brother-in-law, Norullah, who had taken responsibility to receive a tiny-government paid compensation and look after his brother’s daughters and widow, spent the amount on his marriage party. The plight of Sara worsened after her in-law’s family left her alone.

In 2013, Abdul Hossein, a resident of Kohistanat district of Sar-e-Pul province joined the Afghan army out of necessity. He served the Afghan army until his death in 2019. Hossein, as a committed solider, was dispatched on various mission across Afghanistan to fight against the Taliban militants.

Last year, the Taliban militants captured Abdul Hossein while he was en route to visit his family. On December 22, Abdul, as communication signal was poor, told a man from his village to inform his family of his arrival. The next day Sara was saddened by hearing the sad news of her husband’s arrest in the hand of the Taliban.

Sara started praying for her husband’s immediate release while a group of men from her village went to Bamyan and Maidan Wardak to find a way and get Abdul Hossein released from Taliban custody.

On January 10, the militant group killed Abdul Hossein. His corpse was taken to his village for burial.

There were many rumors wrapping around tragic death of Abdul Hossein. Some said the Taliban’s spy identified him when he was getting into a truck to go to Sar-e-Pul, others would suspect the very truck driver as Taliban spy.

Following Abdul’ death, the 26-year-old Sara was left alone to carry the burden of life. She had to raise her daughters, Sima and Zahra. Though her brother-in-law had vowed to look after them but he broke his words almost a year after his brother’s death.

When I asked Norullah to pay me the compensation of my husband’s blood, he responded that I had no right to claim as my father-in-law was alive, Sara says.

She says her mother-in-law has passed away and her father-in-law is elderly. The family of my husband now is trying to claim my daughters, she says.

“The belief that children belong to father, not mother, is commonly [practiced] in my area. I heard my brother-in-law’s conversation; they planned to claim my children and leave me alone,” says Sara.

Mistreatment in the hands of her brother-in-law was something new for Sara but it is a common practice in many Afghan families.  In the absence of her husband, Sara was beaten continuously by Norullah. In 2018, after beaten by her brother-in-law, she made attempt to shoot herself by a gun but survived mysteriously.

Following her husband’s death, Sara decided to live with her parents but on November 21, she along with her daughters left the village and settled in Kabul, in sheer attempt to save her daughters.

The 26-year-old widow says as she did not have access to women rights organizations in Kohistanat district, she has come to Kabul to have access to legal services and receive the amount of money the government pays to every family of Afghan army victim.

“I was an orphan and my mother raised me up, I want to do the same -I do not want to leave my daughters behind,” says Sara.

A difficult life is awaiting Sara and her daughters in Kabul. It is extremely difficult for a single mother with two daughters to live in a city, with an estimated six million population and high unemployment rate. The Ministry of Defense, after receiving a complaint letter, suspended the payment government pays to Abdul’s family until their dispute is not resolved.

Syed Esmatullah, resister officer at district court of Kohistanat, confirmed to Kabul Now that Ms. Sara filed a petition in the district court.

Khayrullah Ziyaee, village elder in Ghozbakhana, says that it has been three months that Sara and her daughters have left her house. She lives in her brother’s house. Sara’s father-in-law says that “if Sara wants to receive the salary of her husband and keep her children, she should come back and live with us.”

According to Afghan Civil Law (Hanafi and Jaffari jurisprudence), a mother has the right to raise her daughter until the age of nine. Once reached nine, the daughter has the rights to choose whether to live with mother’s or father’s family.

Mohammad Ali Hassani, a lawyer, told Kabul Now that a mother has the right to have custody of her children if she is lawfully entitled to raise her children and financially stable to support them.