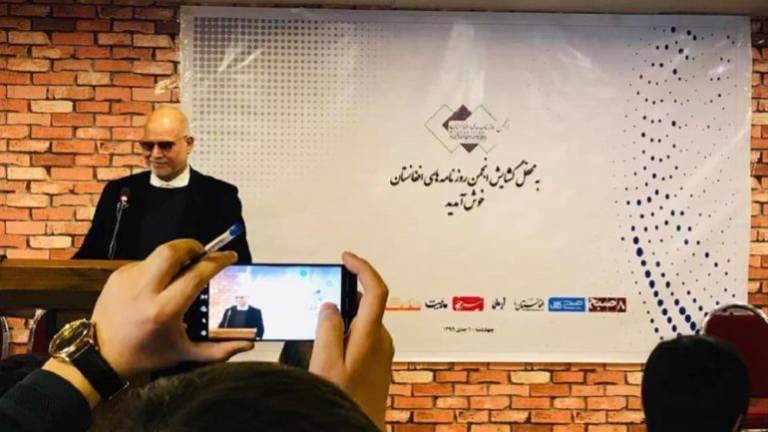 Haidar Mutahar, editor-in-chief of Daily Arman-e-Milli and a founding member of Afghanistan Union of Newspapers, speaking at opening ceremony of AUN in Kabul
KabulNow·December 31, 2020

Ahead of growing challenges including targeted killing against journalists, a number of media organizations founded union of newspapers in Kabul on Wednesday, December 30.

Afghanistan Union of Newspapers has been founded, as its founding members say, to protect freedom of expression and journalists’ rights in Afghanistan.

Speaking at the opening ceremony of the Union, Mr. Mutahar said Afghan Union of Newspapers was founded to address challenges Afghan print media are facing. The Union is committed to work for improvement of media work in the country, he said.

Mr. Mutahar said print media are exempted from tax as stipulated in Afghanistan’s Mass Media Law but the Ministry of Finance regularly collects tax from newspapers and other print outlets. The Union, as he noted, will follow the issue with the relevant authorities to implement this provision of the Law.

Mr. Daryabi said that the Union, as part of its long-term mandate, will work on capacity building in area of journalism to promote professional journalism in the country.

Describing it as a “big step” forward, Sediqullah Tawhidi, Executive Director of the Afghan Journalists Safety Committee, said that the media would be able to defend their legal rights without having a union.

He called on the government to support Afghanistan Union of Newspapers and the country’s print media without exerting pressure or influence. Mr. Tawhidi noted that the government should take investigative reports and analytic op-eds published on the media seriously and act for resolving the issues, instead of pressuring the media outlets and journalists.

Aynuddin Bahaduri, head of Access to Information Commission, was also present on the occasion. Describing it as “historic and hopeful” step, he the Union will play a vital role in the fight against corruption and promoting good governance.

Mujib Mehrdad, the deputy head of Afghanistan Union of Newspapers, said the Union will work hard to preserve freedom of expression and create a better working environment for journalists.

Afghanistan is an insecure country for journalists. Just over last two months, five journalists were killed in different parts of the country.

Afghanistan Union of Newspapers is founded at a time when the Afghan government and the Taliban are negotiating a power-sharing peace deal in Doha, capital of Qatar.