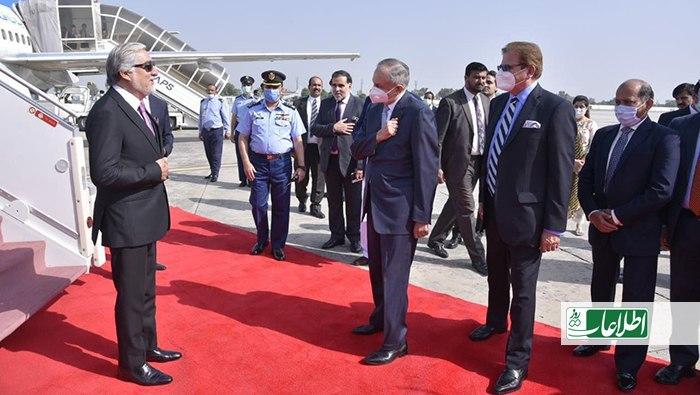 Abdullah lands in Islamabad for a three-day visit

Chairperson of the High Council for National Reconciliation (HCNR), Abdullah Abdullah, accompanied by a high level delegation, landed in Islamabad earlier this morning, September 28, for a three-day visit upon an official invitation by Pakistan’s PM Imran Khan.

The HCNR Chairperson is accompanied by his first and second deputies, Enayatullah Babur Farahmand and Asadullah Saadati, Mohammad Omar Dauodzai, President’s Special Representative for Pakistan, and other high level officials.

Abdullah’s visit to Pakistan comes amid ongoing peace talks with the Taliban, in Doha, capital of Qatar. Pakistan has been often accused of providing sanctuaries, military training, and funds for Taliban insurgency in Afghanistan by Afghan and US officials.

During the visit, Abdullah will meet Pakistan’s PM, President, Chairman of the country’s Senate, Speaker of the National Assembly, Foreign Minister, and other officials. “I hope this visit will open a new chapter of mutual cooperation at all levels, especially on achieving lasting and dignified peace in AFG,” he wrote on his official Twitter account.

Office of NATO’s Senior Civilian Representative in Afghanistan, Stefano Pontecorvo, has welcomed Abdullah’s visit to Pakistan in support of the Afghan peace process. NATO calls on all regional actors to support Afghanistan’s long-term stability, the Office said in a tweet.

According to a statement issued by Pakistan’s Foreign Office, Abdullah’s visit to Islamabad will provide an opportunity for wide-range exchanging of views on Afghanistan’s peace process and strengthening bilateral relations between the two neighboring nations.

“Pakistan fully supports all efforts for peace, stability and prosperity of the Afghan people,” the statement added.

Withdrawal of international forces led by US is a key element of the US-Taliban peace deal signed on February 29 in Doha. According to the agreement, the US is obliged to complete the withdrawal within 14 months after Doha peace deal.

Afghan officials and some regional countries have already warned against consequences of a hasty withdrawal from Afghanistan. Unexpectedly, in an op-ed published on Washington Post on Saturday, September 26, Pakistan’s PM Emran Khan also warned against “hasty withdrawal”, noting that abandoning the Afghan peace process would be a “great travesty.”