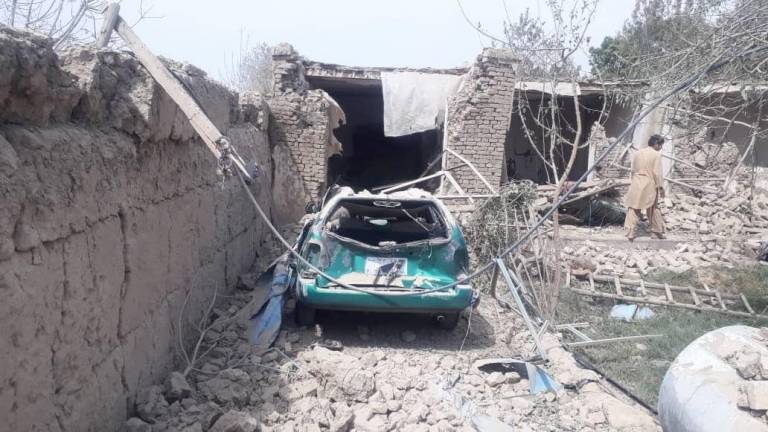 Image of site in the aftermath of the attack
KabulNow·August 25, 2020

Taliban car bomb leaves one dead and 41 wounded in Balkh

A Taliban car bomb killed an Afghan commando and wounded 41 others—mostly civilians—in a military base around 09:00 AM, this morning, August 25, in Balkh district of the northern Balkh province, says a local security official.

The Ministry of Inferior (MoI), however, said that the incident took place earlier today close to a veterinary clinic in bazar of Balkh district.

Talking to Kabul Now, Mohammad Hanif Rezae, spokesperson for the 209 Shaheen Military Corps, said that six Afghan military forces and 35 civilians, including women and children, were wounded in the Taliban car bomb attack.

According to him, the Taliban have failed to infiltrate into the military base of commando forces and Afghan forces have already started providing the wounded civilians with first aid.

Taking responsibility for the attack, Zabihullah Mujahid, a Taliban spokesperson, claimed that dozens of Afghan military forces were killed in the suicide bombing.

Balkh is a key northern province where the Taliban have developed insurgency activities in recent years.

The attack comes at a time when the Afghan government and the insurgent group, under pressure by the US government, are preparing for a peace settlement known as Doha peace process. Under US-Taliban peace deal, the two sides exchanged prisoners, with the Afghan government releasing over 4,000 Taliban prisoners. The Taliban have freed nearly 800 Afghan forces who were kept by the group.

The long-delayed intra-Afghan talks was set to start on August 16 but it stalled after the two sides accused each other of not fulfilling commitments required to kick off the talks.