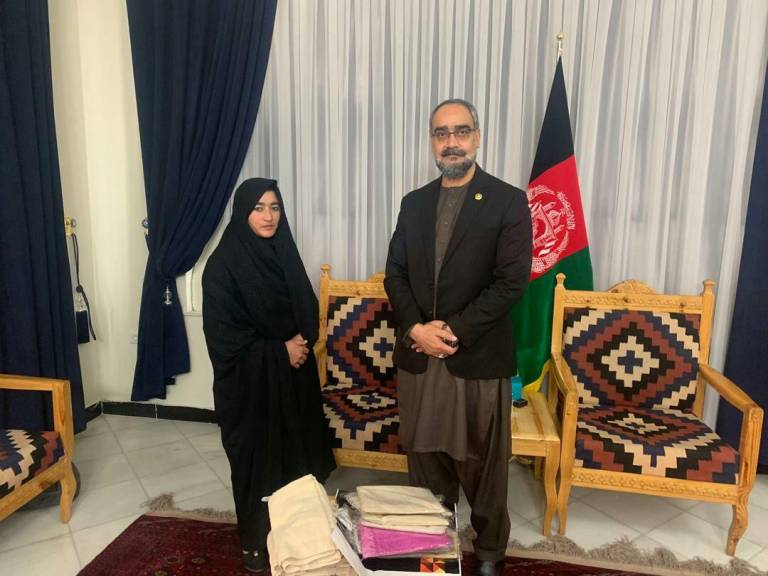 Maryam Sheikh, who is 24-year-old entrepreneur, is standing next to ex-Herat governor
Fatema Hosseini·August 6, 2020

Herat entrepreneur is optimist about future of her business

“I started my work when I was in 10th grade”, says the 24-year Maryam Sheikh who runs a small silk factory in the western Herat province. Having ten siblings, including three brothers and six sisters, Maryam is the sixth child of her family.

For the time being, she is doing her bachelor in management at Kardan University.

Maryam says she faced enormous challenges when she opened her business and her family did not favor her idea of establishing a mini silk factory. Her father, however, stood behind her idea, something that gave hope and courage to the young entrepreneur to pursue her dream.

Running business is challenging for a woman in a man-dominated society where women have been sidelined for decades and centuries. Ordinary Afghan male and female often have a negative perception about women participation in social spheres such as business, politics and security. Maryam says she was badly judged by people and even female members of Herat Provincial Council.

“[In my family], silk weaving is a-century-old tradition. I chose to continue this great profession which my predecessor—grandfather—used to do,” she says.

Maryam Sheikh has attended a number of training programs initiated and implemented by DACAAR Institute, Danish Committee for Aid to Afghan Refugees. Her interest in learning how to run a business and support women has heartened Maryam to learn, work and dream for a better society where women can stand on their own. DACAAR has a significant role in empowering women. It has micro-loan scheme, under which, Afghan women can receive loan to start small business. Thanks to NGOs for their workshops which to some extent changed public perspective about female presence in social spheres, she says.

In 2016, Ms. Sheikh opened her business in Zendajan district of Herat. Her factory manufactures silk, carpet and scarf. As many as 750 women are working at the factory. “With 25,000 afghanis, collected from 750 women, I opened my business,” she says. At the beginning, an organization called RADA cooperated with us for over a year in farming silkworm. At the end of the workshop each female participant was given a box of silkworm, Maryam told Kabul Now.

“[In my family], silk weaving is a-century-old tradition. I chose to continue this great profession which my predecessor—grandfather—used to do”

The expanding silk business in Herat is a source of income for nearly 750 women in the province but silk market has dwindled ever since the country has been hit by coronavirus outbreak.

Herat silk industry, however, remains largely dependent on raw materials imported from Iran and China. Production season of silkworm is limited to three spring months, something that reduces production quantity.

In Sheikh’s factory, as many as 50 women are working to extract raw silk and a number of them are transforming silk into thread for scarf, carpet, and handkerchiefs. “This year, we are capable of buying 10,000 kg cocoons and produce silk,” she says.

To boost up silk market, the Afghan government and public need to join hands, Ms. Sheikh underlines. She passes her gratitude to RADA, an organization which has been supporting Afghan female entrepreneurs.

In the face of new market challenges and social obstacles the country might be facing in the years ahead, Maryam Sheikh, however, seems quite optimistic about the future of her business and her fellow women. “One of the great achievements of mine is receiving the best silk machine gifted by the government of India.” She says that she will launch her newly received machine which has many good qualities as compared to those of old.