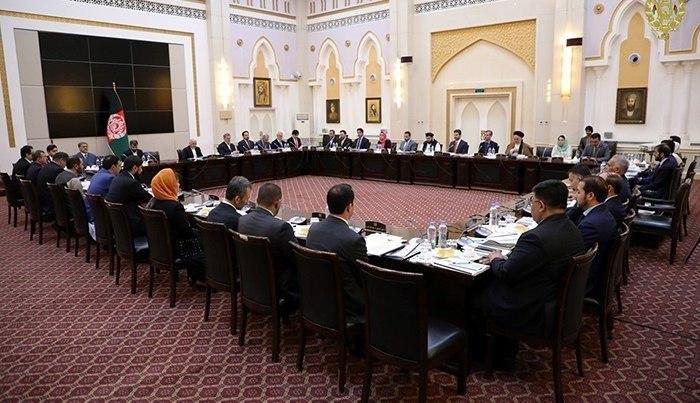 Overshadowed by peace process; Afghan cabinet members yet to complete

At odds to President Ghani’s oath-taking statement on March 09, in which he promised to form his new cabinet within two weeks, the Afghan cabinet has yet to be completed.  Some MPs criticize the government for failure to introduce new cabinet members for vote of confidence.

Before an agreement was reached between President Ghani and his election rival, Abdullah Abdullah – who had taken oath of office as president of Afghanistan on the same day – on May 17, the political tensions between them and efforts on peace talks were seen as main reasons behind repeated delays in introducing the new cabinet members.  Although on paper, the two rivals have reached a fifty-fifty power sharing agreement to form the new cabinet, it may take more months for the Afghan government to complete cabinet members.

Intensified efforts for start of intra-Afghan talks with the Taliban under pressure by Washington, now, seems to have marginalized the issue of forming the new cabinet. Moreover, a dispute over key ministries contribute to the problem as during the reign of the National Unity Government, 2014 – 2019, the two leaders failed to address the issue of caretaker-ship in some ministries.

So far, President Ghani has introduced nominees for the ministries of information and culture, public health, finance, urban development, and foreign affairs. According to an MP, the government is supposed to introduce a new nominee for the ministry of education in the coming days as well. Deputy spokesperson for the President, Dawakhan Minapal, meanwhile, says that consultations are underway to complete the cabinet members. “Consultations and work are underway to identify competent and professional figures to form a totally professional and specialized cabinet,” he said.

According to MP Ghulam Hussain Naseri, administration of the government agencies by the caretakers have undermined the government constitutional legitimacy. Pointing to the 71 article of the Constitution, the MP argues that a government is formed of ministers, not caretakers, and led by the president. Blaming both, Ghani and Abdullah, for continuing work of caretaker ministers, Naseri called on the two figures to introduce the new nominees for the ministries soon.

MPs have repeatedly asserted that caretaker’s leadership of the ministries have undermined the service delivery, governance, budget expenditure, fight against corruption, completing development projects, and other affairs in the country.

“The people are facing difficulties. When they refer to the ministries the caretaker pass their requests to their deputies. This is the second year that the parliament has been inaugurated but the candidates have not been introduced for the ministries,” said MP Fawzia Hamidi. She noted that all private companies who are partner with the government are waiting for ministries to have ministers. “The ministries are mostly led by caretakers. Things are crippled,” she maintained.

This comes as the biennial Open Budget Survey suggested that Afghanistan’s parliament has fallen short to provide the required oversight on the performance of the government, particularly in areas of budget expenditure. The survey issued on April 30 showed that Afghanistan’s cumulative score of having oversight (by the parliament and supreme audit office) on its budget has fallen to 31 in 2019 from 43 in 2017.