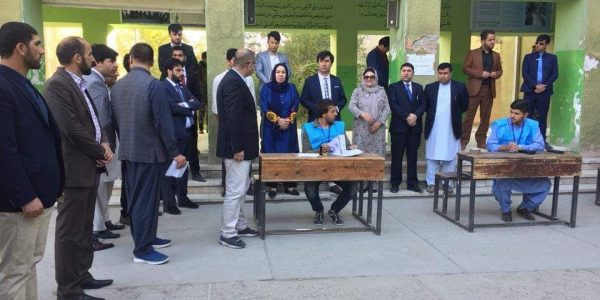 The voting process for Afghanistan’s 2019 presidential elections officially kicked off in its capital, Kabul, and all other provinces – in some provinces with 30 minutes to one hour delay – around 7:00 AM this Saturday’s morning, September 28.

13 nominees, including the incumbent president Ashraf Ghani and chief executive Abdullah Abdullah, are running in the ongoing elections to become the country’s next president.

Kabul Now reporters have so far seen a low turnout in polling centers in some provinces, like Herat and Kandahar, while a high turnout in some others like Balkh province.

Around 72,000 security forces have been tasked to provide security for the polls in all 34 provinces of Afghanistan, according to the MoI.

Over nine million people have registered themselves to vote for electing the country’s next president.

Security forces have relatively a heavy presence in all polling centers and sites in Kabul.

The Independent Election Commission (IEC) announced on Friday, September 27, that technically it was ready to hold the elections in all across the country, noting that it has provided 260 national and international institutions with credential letters and issued monitoring permits for 144, 146 observers.

The Taliban, however, have repeatedly threatened that they would disrupt the election, labeling it a “fake” and “American process.”