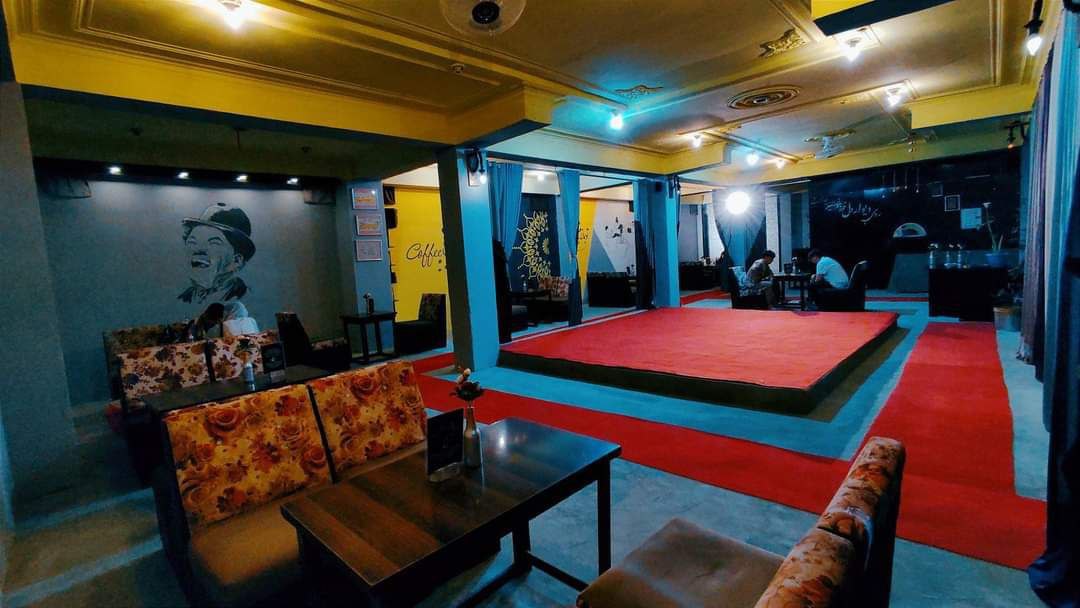 For the past two decades, Kabul has been a city of memories, friendship, and friendly gatherings more than anywhere else in Afghanistan. People could forgo the agony of living in a war-zone situation while coming together to celebrate their friendship, memories, and momentary happiness. The coffee shops around the city were the main hub for these events and gatherings. Every evening and especially during the weekend, coffee shops in Pol-e-Sorkh, in the mid-western part of Kabul, hosted people from every corner of Kabul, mostly the young and educated generation of Afghanistan.

But, on August 15th, 2021, suddenly, everything changed, at least for the ordinary Afghans living in Kabul. Kabul’s colorful atmosphere turned gloomy, silent, and depressing. The coffee shops around the city became empty, dark, and haunted. No more poetry nights, Chelleh Night events, live music, gatherings, literary nights, or other cultural programs. The coffee shops gradually lost customers, and empty spaces turned into ghost houses. The Taliban banned women from going outside to restaurants and coffee shops – soon after, refraining the coffee shops from hosting any events. A situation that demonstrates the cause of suffering in Rashid’s (pseudonym) life.

Rashid remembers when four years ago, finding seats at any coffee shop was a difficult task.  At that time, the culture of sitting in a café and running a restaurant among young people was a booming phenomenon.  Seeing a potential business opportunity, Rashid invested a small capital of ten thousand US dollars with the help of some of his friends and opened a small coffee shop.

Rashid wished for his small business to be a success story.  But it did not take long before the pandemic cast a dark shadow on his work. However, despite the impending doom environment of the time, Rashid did not despair. He persisted and continued to believe in his dreams.

Not long after, Rashid found himself in a terrifying situation. This time, things took a dramatic turn for the worst. Rashid says, “Towards the end of  the pandemic, things were slowly getting better when the Afghan government suddenly collapsed, and the Taliban took over.”

Since the Taliban’s return to power, Rashid has struggled with providing for his and his family’s daily necessities.

On November 8, 2022, the militants from the so-called Ministry for the Propagation of Virtue and the Prevention of Vice, the Ministry of Information and Cultural Affairs, and the Taliban Intelligence Directorate put a legal seal on dozens of coffee shops, including the Rashid Coffee Shop, in Kabul city. Overnight, he and his ten colleagues lost their jobs, which were their only source of income and livelihood.

According to Rashid, what hurts him the most is that his business was beginning to recover from the pandemic when another catastrophe hit them: the Taliban’s assault against the local restaurants and cafés.

The Taliban’s fight against the restaurant and the café industry is worse than the pandemic.

Rashid says that with the spread of Covid-19, the property owner temporarily reduced his rent–as well as waiving his rent for a few months,  “I was happy that at some point in the future, I would be able to compensate for all the losses and debts.”

But the fall of Kabul, along with several months of unemployment, added to his ever-increasing financial debts.

Soon, the Taliban shut down his coffee shop. However, he still had to pay rent, tithes, energy bills, and other expenses per the Taliban’s decrees. “Now there is no one to buy the furniture and other items at even half the price I invested to pay for the debt,” Rashid says.

Mostaghni Shirzad (pseudonym), a representative of the Kabul coffee shop union, says the Ministry of Propagation of Virtue and Prevention of Vice closed more than five hundred cafés and restaurants.  “In each café or restaurant, five to ten people were employed, and now they all have lost their jobs and means of livelihood. Furthermore, the shops are all rented, and we business owners have to pay for rent and other expenses, despite our businesses being closed.” Shrizad emphasizes that most restaurant employees are also the sole breadwinners of their families. Now, with the closure of the cafés, they have lost their sources of daily income and struggle to meet even their basic needs. Before this, the Taliban banned coffee shops in Herat, Kandahar, Balkh, Zabul, Nimroz, Farah, and Nangarhar provinces.

According to the union representatives, thousands of people have lost their jobs after the closure of the coffee shops in different provinces, and they have been added to the number of unemployed and needy people.

Why the Taliban have Sealed Restaurants and Cafés?

A letter from the Ministry of Propagation of Virtue and Prevention of Vice, addressed to the Union of  Coffee Shops, a copy of which has been provided to Kabul Now, states, “Following the letter of 2516, which enumerates the harms of using a hookah and closing coffee shops in Kabul with the deadline (three months) having passed; therefore: hotels, restaurants, and coffee shops that offer hookahs and other contrabands  shall be sealed.”

An owner who offered hookah in his coffee shop says, “We are not in favor of offering hookah, but our customers come to coffee shops for hookah, and there is a demand for it.”

He says customers who order hookah are not his typical customers. Since they are powerful and well-connected, restaurant owners cannot refuse their demands for hookah and other contrabands. This is why some restaurants or coffee shops offer hookah. “Either way, we, the business owners, must pay the price of either offering or not offering hookahs.” the coffee shop proprietor says.

Rashid believes that there are people in the Taliban administration who secretly support the import of hookah and other contraband. Yet, they cater the access to such substances toward certain people, “Ordinary people and families are not fans of hookah, or they can not even afford it. Only certain people can use it. If the Taliban want to solve the problem. They should find a way to ban the import of hookah instead of closing the restaurants and coffee shops,” he adds.

Majid Rastin (pseudonym) is another owner of a coffee shop in Kabul. His shop is located in one of the busiest places in Kabul, and he invested fifty thousand dollars in launching his business. He says his business has been doing well for several years due to compliance with the standards and customer satisfaction. Alongside him, ten other people were working at his coffee shop, but now they are all unemployed.

Majid believes the Taliban have laid the grounds for the collapse of the remaining few businesses in the country. Speaking to Kabul Now, he adds that in the beginning, the Taliban ordered separating women and men into different sections. Then they proceeded to ban women from going to restaurants. Finally, they called on restaurants not to serve suspicious customers. Restaurant owners do not have the infrastructure to conduct a background check for each customer.

Adding to the restrictions, the Taliban decreed that restaurants not hold any gatherings for birthday parties.

We had to act per the decrees, but our customers dramatically decreased. Still, we were trying to find somehow a way to survive. Now their reason for closing restaurants and coffee shops is hookah. Sooner or later, they will find another reason to continue their assault on the local businesses.

Ahmadi, a lecturer at a private university in Kabul, believes that the Taliban administration fears people gathering in public spaces. He thinks this is why the Taliban are not supportive of the service industry, particularly the restaurants and coffee shops. Coffee shops and restaurants are the only public spaces under the Taliban rule where people can still gather for brief periods as a respite from the ongoing violence and tragedy of life.

“They [the Taliban] do not seem to be able to tolerate happiness. The Taliban is a tribal and religious movement.  According to their interpretation of Islam and Sharia, any joyful activity is considered forbidden and un-Islamic as it corrupts people’s minds and beliefs. The Taliban seem firm in their intention of closing all the public spaces to stop people from gathering.  However, the dire economic consequences of their policies do not seem to be an important consideration for them,” Ahmadi adds.

Representatives from the Coffee Shops and Restaurants Union say that they have spoken to different government departments to find a solution, but none seem to be bothered by the situation. Some appointees in the Taliban administration have blamed the union members for running anti-Islamic businesses.

After seizing power, the Taliban administration imposed extensive restrictions and banned any outdoor activities for women. Hundreds of women-owned businesses, such as restaurants, coffee shops, embroidery shops, clothing stores, tailoring shops, and beauty parlors, stopped their operations and disappeared from the major cities.

According to the records kept by Kabul Municipality, approximately 10180 restaurants and cafés, 106 hotels, and 265 food distribution centers or street food stalls are registered in their database. The officials at the Kabul municipality say that they have yet to have the exact number of café s restaurants sealed and closed after August 15th of last year.

Before this, the Ministry for the Propagation of Virtue and Prevention of Vice had refrained the barbershops from shaving men’s beards. In addition, the Taliban recently shut down women’s bathhouses all across Afghanistan.

Afghans say that the Taliban have stopped construction and real-estate projects under the pretext of checking property documents and preventing illegal land grabs by the land mafias. However, this policy led to a forced downturn in the real estate business and further unemployment.

Ghafouri, who is a construction worker, says that he has not been able to work for the last one and a half years. He says, “Before the fall of the Afghan government, a construction worker’s daily income was between 500 to 1,000 Afg ($7-14), but they [the Taliban] halted our construction projects. Since then, all my efforts to restart my work have led nowhere.”

Meanwhile, both the pandemic and the collapse of the government at the hands of the Taliban have affected many businesses and brought them to a standstill. This situation has caused a sharp rise in unemployment rates while simultaneously exacerbating poverty levels. Earlier this year, the United Nations Development Program’s (UNDP) Resident Representative in Afghanistan also reported that thousands of jobs had been lost in this country, and the poverty rate had increased from 70% to more than 90%.

In a report published in early November, The International Committee of the Red Cross also warned about the deterioration of the humanitarian situation in Afghanistan. The report states, “The worsening crisis is driving millions of people into extreme poverty, while many are being forced to eat food scraps. . .in order to avoid starvation. Widows and orphaned children are among the worst affected, most of whom are not even able to afford one meal daily.”