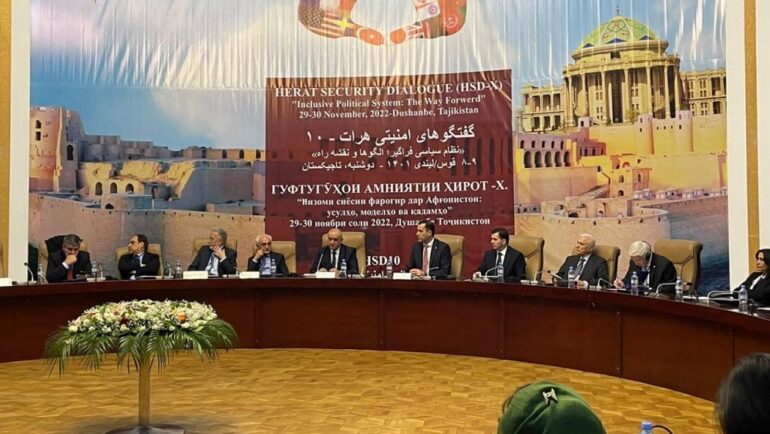 Herat Security Dialogue: Tajikistan Concerned About the Activities of Terrorist Groups in Afghanistan

The 10th round of Herat Security Dialogue (HSD-X) kicked off this morning Tuesday, November 29 in Dushanbe, the capital city of Tajikistan.

Afghan Institute for Strategic Studies (AISS) has organized the 10th round of the annual “Herat Security Dialogue” meeting for November 29 and 30 in Dushanbe city, the capital of Tajikistan. These dialogues were initiated in 2012 to focus on peace and security topics related to Afghanistan.

The main topic of this meeting is titled “Inclusive Political System: The Way Forward”.

Representatives from various foreign countries, including Karen Dicker, the Chargé d’Affaires at the US Mission to Afghanistan based in Qatar, also participated in this dialogue.

Keren Dicker called this meeting an excellent opportunity to exchange views on the situation in Afghanistan with representatives from Afghanistan, Tajikistan, regional countries and European Union. Karen Dicker in a tweet thread stated, “I am here to listen, but I will be prepared to reiterate USA’s strong support for the Afghan people and for an Afghanistan at peace with itself and its neighbours.”