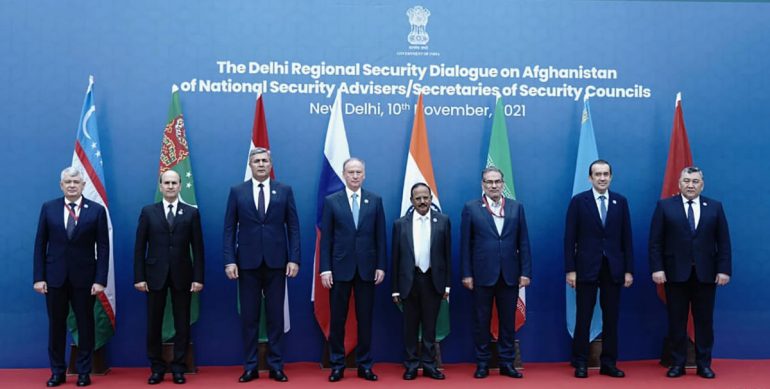 The high-level meeting was held yesterday, Wednesday, November 10, with the presence of National Security Advisers and Secretaries of the National Security Councils from India, Russia, Iran, Kazakhstan, Kyrgyzstan, Tajikistan, Turkmenistan, and Uzbekistan.

Though China and Pakistan had been invited to attend the meeting, the two countries did not attend it.

The Taliban who overthrew the previous Afghan government on August 15 and is currently ruling the country was not invited. A spokesman for the group welcomed the meeting and hoped that their government will be invited in next meetings.

“Afghanistan’s territory should not be used for sheltering, training, planning or financing any terrorist acts,” part of the declaration reads. They also stressed the necessity to form an open and truly inclusive government that has representation from all sections of their society, including major ethno-political forces in Afghanistan.

The Taliban has already announced a care-taker government with all its top officials chosen from within the group’s leadership council with a Pashtun monopoly. None-Pashtun ethnic groups have almost zero representation in the current government.

Mullah Abdul Salam Hanafi, who is an Uzbek and a known Taliban figure, is appointed as deputy prime minister.

There is only one person appointed as a Minister of Public Health from Tajik ethnicity and one deputy minister from Hazara ethnic group. Tajiks and Hazaras form the second and third major ethnic groups in Afghanistan.

Participants of the Delhi meeting further reiterated that humanitarian assistance should be provided in an unimpeded, direct and assured manner to Afghanistan and that the assistance is distributed within the country in a non-discriminatory manner across all sections of the Afghan society.