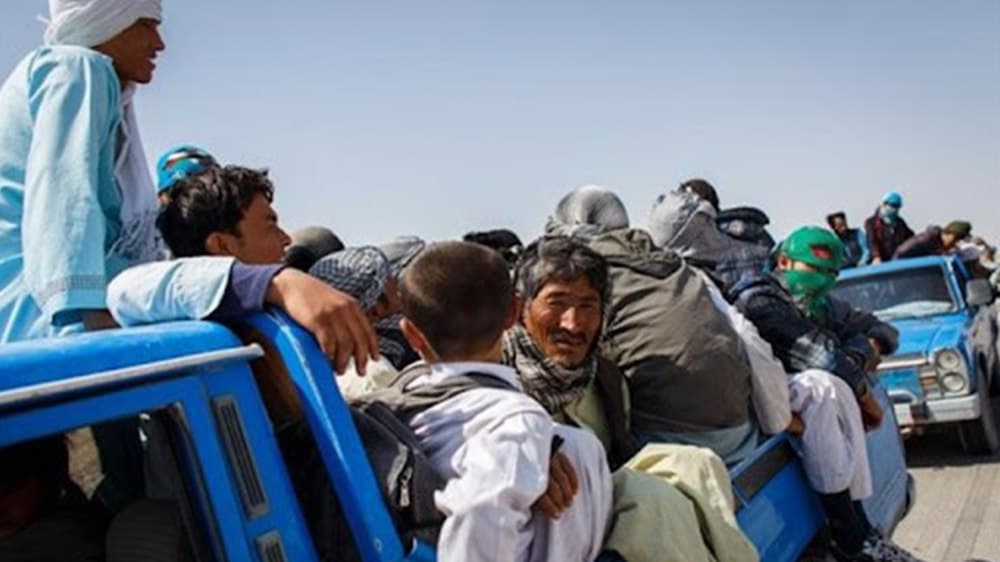 “I know all the risks and the high possibility to die in smuggling routes to Iran. For me, there is no other option but to leave Afghanistan and be smuggled to Iran,” says Feroz, a resident of Herat, who lost his job with the Taliban return to power. He has taken all his household appliances to a second-hand shopping site in Bakrabad neighborhood of Herat to sell. After a long negotiation, the buyer agrees to buy all his home appliances for less than 100,000 afghani.

Forced by unemployment and the worsening situation in Afghanistan, he has decided and planned to leave his home country. A week later, he and his wife are supposed to enter Pakistani territory through one of the smuggling routes in Nimruz province used by hundreds of Afghans almost every day for illegal migration to the neighboring Iran. If lucky, they can enter Iran through Pakistan. If not, like many others they would be killed by the bullets of Iranian police borders, kidnapped for ransom, or even would die of lack of food or other unexpected incidents.

In mid-September, the International Federation of Journalists (IFG) reported that at least 153 media organizations had been forced to cease their operation in Afghanistan since the Taliban return to power. It means thousands media workers have lost their jobs who are mostly left with no other option but to flee the country. Talking to Kabul Now, many reporters describe the Taliban restrictive regulations on operation of the media outlets as a main reason behind the media closure.

Najibullah Nazari, a local reporter in Ghor province, has also found himself forced to flee Afghanistan. He has lost his decade-long career with the Taliban takeover of the country. The local journalist thinks that there is no room for media operations and journalists under the banner of the Taliban regime. He formerly worked for the state run TV network in Ghor and has not been paid ever since August 15, when the Taliban overthrew the Islamic Republic of Afghanistan. “I have been facing increasing financial problems after the Taliban’s takeover and delays in salary payments of the government employees. I have to make it illegally to Iran and seek harsh labor.”

Taimor, a farmer in the western Badghis province, describes this year as the severest ever drought that has affected the Afghan farmers. He is now willing to give up on his agriculture work and leave for Iran to find a better work to support his family.

“I [will] pay five to six million [Iranian] toman (15,000 to 18,000 afghani) to human trafficker to take me to Iran. Unfortunately, I made no profit of the farm, and I have spent all my savings. Now I have nothing to spend.”

Many farmers able to work in Iran, have already left Afghanistan, and many others continue to do so.

In a report titled Running out of time – A looming drought in Afghanistan released in June – three months before the Taliban takeover, the Norwegian Refugee Council said that “three million people” in the north and western provinces of Afghanistan face dire consequences of the drought.

“This year’s drought will be the final straw for millions of Afghans struggling to survive after decades of conflict and more than a year into the Covid-19 pandemic. Memories of being uprooted from their homes due to lack of water during the 2018 drought are still fresh in the minds of hundreds of thousands of people in the country,” Astrid Sletten, Norwegian Refugee Council (NRC) country director in Afghanistan was quoted as saying in the report.

This year’s drought has negatively affected Afghans to the point where, in fear of winter, many families started to sell their children, hoping to make money to save the rest of the family.

A western province in Afghanistan, Nimruz is the main corridor of human trafficking to Iran. Human traffickers are more active and their black businesses are booming more than ever as the western border faces a dramatic Afghan exodus. Talking to Kabul Now, some Afghans departing for Iran through the trafficking corridor said that they are firstly smuggled to Pakistan and then to Iran.

Ghulam Sakhi, a 14-year-old boy, was deported back to Afghanistan through Islam Qala border after he was arrested by Iranian police forces. He says that illegal travel is dangerous. Sometimes, the people can get killed too, he added. “30 up to 40 passengers were put in Toyota cars. The drivers dashed to Pakistan. We traveled a long distance between Pakistan and Iran by foot without food to eat and water to drink.”

He eventually entered Iran, only to be caught by Iranian soldiers in an ambush. He was deported back to Afghanistan after spending several days in Iranian detention centers.

In order to provide a living for his family, he is still determined to try it again with a new human trafficker.

In an interview with Kabul Now, Naeem Alhaq Haqqani, the Taliban’s director for cultural affairs in Herat, asked the people to stay in Afghanistan and refrain from trying to travel illegally to Iran.

Afghanistan borders with Iran, Pakistan, and Tajikistan have seen an unprecedented exodus of Afghans, in recent months. Videos showing hundreds of thousands of desperate Afghans, including women and children, stuck behind closed borders in hope of traveling to the neighboring countries started to circulate on social media ever since the Taliban takeover of Afghanistan.