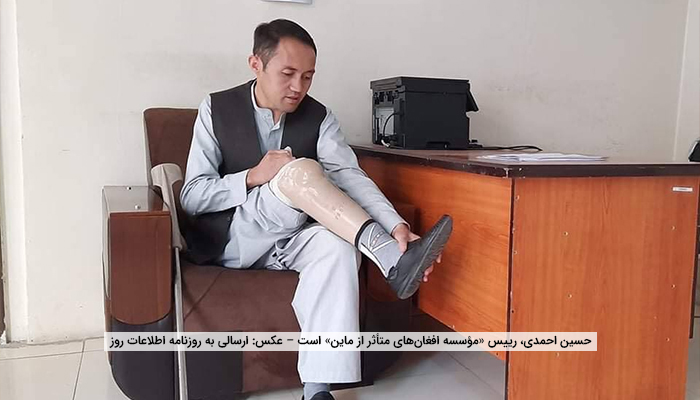 A landmine survivor who fights for rights of PWDs

“I frequently heard people calling me ‘lame’. I got disabled when I was a 10th school grader and my teachers would often call me ‘lame’ in a humiliating way,” says Hussain Ahmadi. He lost his right leg in March 2005 in a blast in Kart-e-Sakhi neighborhood of the capital Kabul while celebrating Nawroz of 1384 (solar calendar). Hussain is now director of Afghan Landmine Survivors’ Organization (ALSO) who effectively fights for the rights of Afghans with disabilities.

Hussain was born and raised in Nawur district of Ghazni. After the collapse of the Taliban regime, his 11-member family moved to the capital Kabul. On the first day of 1384 solar year (March 21, 2005), he was celebrating Nawroz in the hillsides of Kart-e-Sakhi along with his friends. Suddenly an IED went off and Ahmadi found himself under dust and blood. “I wish I had not gone to that celebration and that day would never have happened in my life.”

Many looked at him as a half-man but he was indeed a life-saver for the Person with Disabilities (PWDs). It took him five years to accept his disability and get accustomed to the new and undeniable realities in his life. After that incident, he would often see nightmares upon falling asleep. Once awake, he would move his body and feel light weighted. After completion of his undergraduate studies, Hussain applied for many positions in different organizations but would always receive rejection.

In his last attempt, he applied disparately to work with the ALSO.

Before the blast, Hussain was living a difficult life along with his family. To improve their living condition and in order to educate their children, Hussain’s parents left their remote village, Burjigai, in the southern Ghazni province for Kabul city. Hopes vanished once Hussain became disabled as a result of the blast. After the incident, his mother got digestive disease and his father got depression.

Hussain’s father was no longer good-natured and did not have that vivacity. “I could clearly see depression in him. All he was worried about was me and my life. All he did was thinking and caring for me,” he said of his father.

In addition to grabbling with a tough time at home, in his society, Hussain had to cope with ill judgment and mocks people would often make about him.  “Once, one of my friends told me that ‘you are half a man.’ Unfortunately, society is looking at your appearance. You would be respectable if you are not disabled physically. But if you are disabled, then you are half a man.”

Hussain who is 31 years old says that he has been often called “lame” since the incident took his leg. He would often dream to become a physician but it was over after that incident. Still, he tried hard and got admitted to the Languages and Literature department of Kabul University after taking the university entrance exam, known as Kankor.

With the all suffering he faced out of his disability, Hussain now says that disability is a diversity in society. But the people and the society behave them as if they are half a human. As per his account, the judgments of the community members even lead some Persons with Disabilities to try to commit suicide. “Using the undefined word ‘lame’ and asking about the details of a person’s disability is psychologically harmful to the person with a disability,” he says.

After a one-year stay at home, Hussain got membership of the International Committee of Red Cross (ICRC) in Afghanistan. The ICRC provided him with a prosthetic leg, making it easier for him to get out and walk.

Inspired by the dominant sphere within the ICRC community, Hussain tried to work hard for improving his own and fellow PWDs situation. “Watching those who had more disabilities than me trying hard encouraged me to work hard.”

In 1388 solar year, Afghanistan passed the Law on Rights and Privileges of Persons with Disabilities. However, the law drew continued and increasing protests by the PWDs, and organizations supporting PWDs with part of the law became under criticism as biased. The very article of the law which sparked protests was its article four. In article four, the law obliges the government to provide financial assistance only for those PWDs who lost part of their body in war.

In 2007, some PWDs and some others without disabilities founded the ALSO to support the PWDs and to amend the Law on Rights and Privileges of Persons with Disabilities. The ALSO soon expanded its operation in the capital Kabul, Herat, Balkh, and Bamyan provinces. Many PWDs could find jobs with support from ALSO.

Before becoming the director of ALSO, Hussain worked with the organization as a psychological consultant. Moreover, he was also in charge of capacity building at the ALSO and would provide assistance to those wounded in the war alongside the doctors from the Doctors without Borders. “It was the first time I enjoyed a substantial and good activity. I learned to help those in need as much as I can,” he said about his work.

Working with the ALSO, Hussain would frequently visit 13 provinces meeting with the PWDs. He found the situation of these PWDs more demanding and formed a team of physiological consultants. “All of our advisers are PWDs and a PWD can understand what a PWD wants. Another activity of our team is holding training workshops and capacity building of the PWDs,” he detailed about operation of the ALSO’s team of psychological advisers.

In its push for amending the Law, all afghan PWDs, those disabled in war or by natural incidents, have stood up with the ALSO, according to Hussain. “As far as we know, they say that the biased articles of the law are removed and the article four would possibly change,” Hussain said about one of the ALSO’s core missions.

In November 2015, Hussain attended the Meeting of the States Parties to the Convention on the Prohibition of the Use, Stockpiling, Production and Transfer of Anti-Personnel Mines and on Their Destruction. While delivering his speech at the meeting and representing Afghanistan, he remembered the harsh and tough conditions his family went through. “I had a rare feeling while delivering my speech. I would think about the night when my father did not sleep for me. I remembered the day when one of my friends took me out of his car and picked another friend who had not disability. I also remembered the ‘lame’ that my teachers called me and also kindness of my classmates at the university,” Hussain said, adding that he tried his best to raise the demands of the Afghan PWDs at the conference.

The ALSO and Hussain vision is creating circumstances in which the PWDs can be re-integrated into the society, a change in how the community look at them and improving their living condition. As Hussain underlines, as director of ALSO, he plans to work on capacity building of the PWDs and mitigate the level of violence against women with disabilities. “But, we currently face financial problems. There are four training centers for the PWDs which need a budget. We are trying to find financial sponsors for keeping these centers operating.”

The story has originally been developed by Etilaat-e-Roz’s Hadi Khoshnawis and translated into English by Mokhtar Yasa.