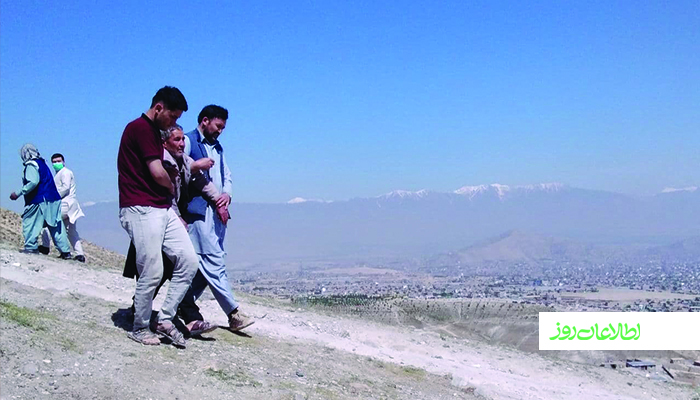 On Sunday morning as the sun rays were shining on the street where Sayed ul-Shuhada High School is located, a large number of shocked men and women with puffy eyes were looking for the remnants of their loved ones who were missing after the school bombing late Saturday, May 09.

The Ministry of Interior has confirmed more than 50 dead and 100 wounded as a result but a group of people assigned to arrange burial arrangements of the dead victims told Kabul Now that 81 people were killed in the deadly bombings.

Salim, 35, was looking for signs to find his relative Shukria, who was missing since the bombing hit her school around 04:30 PM on Saturday. After the deadly incident, her family members and relatives checked all Kabul hospitals, the lists of the wounded victims, and the queues of dead bodies covered with white covers in hospitals for the whole night to find signs of the teenage school girl but to no avail. Of all the people searching for Shukria, only Salim has found a shoe assimilating that of Shukria but he is not sure whether it’s hers.

While female students were leaving the school in crowds, a car bomb went off in front of it. But it was not the last as two other planted landmines were also waiting to hit the school students on that Saturday evening. The next day, Safura, 14, left her home early in the morning in search of her missing classmates. On Saturday evening, she had left the school earlier and heard the explosion from a distance followed by shouts and loud cries of the school girls. She started running back to school thinking that her two sisters might be also among the shouting girls but the second blast hit the panic crowd. Of the extreme panic and fear, she fled the area and found herself in an unknown alley. “I found a telephone somewhere and called home saying that ‘I’m alive.” When I arrived home, one of my sisters had reached home before me but the other one had not. She also returned home late in the night,” the school girl recalled the scenes. “I don’t know anything about my classmates. I’m here to know about them but no one answers me,” Safura said while desperately looking for her classmates in the attack area.

“When I got out of my home, the road to Sayed ul-Shuhada High School was fully turned black. The schoolgirls had fallen everywhere with their black-colored uniforms. Neither police nor Ambulance were seen in the area for two hours. The people transferred the wounded on their shoulders, by motorcycles, by rickshaws, and by their personal cars,” Habibullah, whose house is located in the vicinity of Sayed ul-Shuhada High School, recalled the scene after the blasts.

Hours after the blasts two state-run hospitals – Mohammad Ali Jenah Hospital and Barchi’s 50-bed Hospital – and some private hospitals became full with relatives of the victims, the wounded and dead bodies of mostly the teenage girl students. Everyone who did pass the hospitals by would see worrying people, some mothers, and fathers shouting in tears.

“A shrapnel has hit my shoulder. I don’t remember anything else. When the explosion happened I just saw two of my classmates who were fallen on the ground. One had burned too much and the other was also in critical condition. The first one is now dead,” said Zulfa, a 7th grader of the high school, who was lying on a bed in Alemi Curative Hospital.

Zulfa’s father, Ghulam Abbas, was busy working in Qala-e-Naw, a western neighborhood in Kabul when he heard the explosions. When heard that it had occurred near Sayed ul-Shuhada High School, he rushed towards the school. “I was looking for my daughter. The old, young, men, women and everyone was crying. The crowds were crying and running,” Ghulam Abbas says of the scene, adding that he could find his daughter late in the night at the hospital.

Four students from his neighbors and one of his relatives have lost their lives to the school bombing.

Maryam, 13, who is a 7th grader, is still living with the trauma of the bombing and hurriedly reaches herself to her home after the blasts. She realized his injury at home. Though it seems that education centers, particularly in the western neighborhood of Kabul city populated by the Hazaras, are the most accessible and favorite targets of such attacks, she still seems strongly determined to continue pursuing her education. “I want to continue my education and become self-reliant. I have to rebuild my country.”

Hanifa, Atifa, and Massoma who are all sisters still live with shocks from Saturday’s blasts near their high school. Their parents are often forced by the traumatic attacks to embrace them and provide comfort. Atifa, who was closer to the explosion site, is often burst into tears and start shouting. No one can calm her down. Her parents try to talk to her but she keeps crying. Sometimes she gets up and takes her books as if she wants to ask something from her classmates. But again she closes her books and starts shouting.

The father of the three sisters rushed to school when he heard the first blast but the second landmine went off near to him while he was on the way to school. As a result of the second explosion, he has lost his hearing now. However, he seems happy for he has all her three daughters survived the deadly bombing.

In July 2016, a powerful blast claimed by the Islamic State Khurasan Province (ISKP) took the lives of at least 80 peaceful protesters – mostly Hazaras – and wounded more than 230 others also in the western part of the capital Kabul. The Hazaras took to the streets in thousands to protest a government’s decision regarding re-routing a power transmission line that was previously set to be drawn from Bamyan. The dead victims of the attack against the protest were buried in a hilltop near a large cemetery west of Kabul and named this as Tapa-e-Junbesh Roshanayee – literally means hill of the enlightening movement. In August 2018, an ISKP suicide bombing in front of Mawoud tuition center killed at least 48 people, mostly students preparing for the university entrance exam, and wounded 67 others in the same neighborhood. The dead victims of the suicide bombing were buried in another hill around the same cemetery which is now known as Tapa-e-Danayee.

On Sunday morning, people started digging graves in another hill on the left side of Tapa-e-Roushnayee, to bury those girls killed in the school bombing – the third addition to cemeteries of the Hazaras fallen victims to attacks targeted them for their ethnicity and religion. The hills filled with graves overlooking the west part of Kabul were filled with helpless, exhausted, and crying people. No government officials were spotted in the area. Whoever was coming down the hills had already buried their loved ones and whoever going up hills was about to bury a loved one.

A group of people who had been tasked to manage the burial affairs of the dead victims, released a resolution with some specific demand from the government, the United Nations, national and international human rights organizations. They called on the government to announce a day as national mourning day, develop an urgent security plan for the west of Kabul, assign a fact-finding committee to probe the deadly bombing, and provide assistance for families of the victims.

Moreover, they called on the United Nations and the International Criminal Court in Hague to probe the “terrorist attacks and genocide against the Hazaras” and bring the perpetrators to justice.