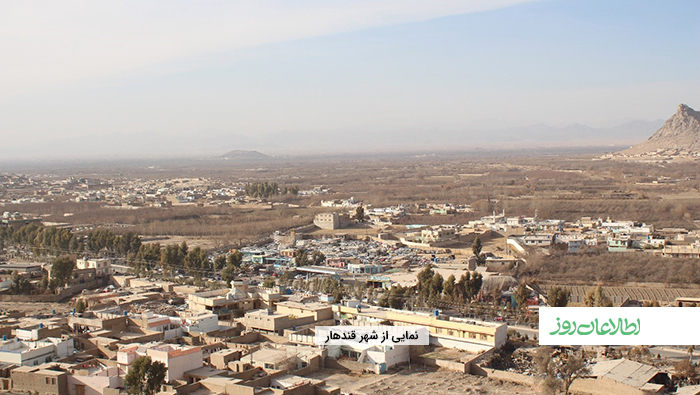 The wound of war: displacement and desperate search for bread

“Move if you are standing, stand up if you are sitting. Come here, hurry up!” Abdul Baqi, 47, listened to a voice message sent by his niece, Ahmadullah. Having offered his morning prayer, Baqi was inside a mosque in Kandahar city as he caught the trembling voice of his niece which put him in state of worry.

Upon receiving the message, Baqi along with his wife and children rushed to a car to take them to their village, Sulghai in Zhari district of the southern Kandahar province. On his way to Sulghai, he received repeated calls from his village fellows and close relations. His cellphone was ringing non-stop and very caller on the phone would ask where he was: “where are you? Hurry up,” they would say on the phone.

The repeatedly worrying calls by close relatives in the early morning made the 47-year-old Baqi terribly worried. As he arrived in Mirwais Mena – a neighborhood in Kandahar city – a village fellow told him to visit the village alone and avoid taking his wife and children.

On that day, he received calls almost from every close relatives but not any from his two brothers, Mohammad Musa and Mohammad Qassim. Baqi cannot remember how long it took for him to reach his village but he does remember deaths and destruction. “Our house was turned into ashes. Men village fellows were digging to take out my family members trapped under rubbles.”

Arriving at his village, he saw people taking out each of his family member, including his two brothers, their wives and children, one after another. Abdul Baqi, as now he recalls, felt week enough to look at the faces of his dead brother, Mohammad Musa, and his nieces, Hasina and Massom, who were taken out of the rubbles. He went unconscious while locals were still busy searching for dead bodies of his family members. When opened his eyes, he found himself hospitalized in Kandahar provincial hospital. “I could do nothing.”

The locals had buried all ten members of the Baqi family before he regained his consciousness. After regaining his consciousness, Baqi returned to his village and attended funeral ceremony of his loved ones lost in aerial bombardment conducted by Afghan Air Force (APF).

How did airstrike target civilians?

About three months ago, the Taliban militants launched attacks against some districts, including Arghandab, Zhari, Panjwayi, and Maiwand districts of Kandahar. As a result parts of the districts fell to the Taliban.

To push back the militants who were stationed mostly in residential areas, Afghan defense and security forces later launched a clearance operation in these districts. A fierce fighting which erupted between the two parties, expanded to houses, factories, and farmlands of the civilians. In addition to financial losses, the fighting apparently inflicted heavy casualties on population—the one as Abdul Baqi’s family have suffered.

As Baqi put it, when the Taliban militants launched attacks on their area, Afghan police and security forces left the area without much resistance. Upon capturing the area, particularly in Sulghai village, the militants stationed in mosques. Later, the army helicopters started bombing the mosques inflicting heavy casualties on the Taliban militants. Then, the militants took positions inside houses and used them as launch pads against Afghan security forces. One of the houses where the Taliban took position was next to the place where Abdul Baqi’s brothers were living inside.

Almost at the beginning of the conflict, the militants took position inside the house started targeting government forces. In response, military drones dropped bombs on several positions of the militants. “When the military aircraft wanted to bomb the Taliban position next to our house, the bomb was mistakenly dropped on our house.”

As a result, ten members of Abdul Baqi’s family were killed in the airstrike. The victims are as follow: Mohammad Musa, 50, and his wife, Mahgul. Their three children who are namely Nader, 14, Dawood, 10, and their five years old daughter, Hassina. Mohammad Qassim, 45, and his wife Zarghuna. Their two daughters (Eight years old Fatima and six years old Wassila), and their two years old son Khalid Ahmad.

The 12 years old Mirwais, who is Mohammad Musa’s son, and the five years old Safura, who is Mohammad Qassim’s daughter, survived the nightly airstrike. “Half of the house collapsed when the bomb hit. My father was sleeping near the door. [He] was martyred. I was sleeping along my other brothers in another corner of the house. My two brothers and one sister were martyred and I survived. I was stuck under the rubbles and felt like my feet were senseless,” Mirwais retold the scene of the deadly airstrike.

According to Mirwais, it was around 01:00 AM when their house came under bombardment. He went unconscious several minutes after the bombing. The locals rush to the area the next morning during the dawn and took them out of the rubbles. Then they realized that of the 12 people, only Mirwais and Safura were alive. As he put it, when Mirwais opened his eyes he found himself inside the clinic in the area.

Abdul Baqi and his younger brother, Ghulam Farooq, had left the area along with their wives and children before the deadly night for receiving medical treatment in Kandahar city. They had also taken Jaber Ahmad, the seven years old son of Mohammad Qassim and the two years old Zaher, son of Mohammad Musa, with them. Now Mohammad Musa and Qassim have each left two children behind.

Abdul Baqi had also lost his father to the war in Zhari district few years ago.

It was not just Abdul Baqi’s house bombarded in that night. “Not just my family, many people were martyred. Which one I should speak of!” he said when asked about harms and casualties inflicted to his fellow villagers.

Citing words heard from locals in the bombarded village, Mohammad Ibrahim Amiri, said that the aircraft started bombing several houses after the government forces spotted Taliban militants targeting them from inside. “More than 50 people were possibly killed over the night,” he, who is a nephew for Baqi, estimated the death toll.

The displaced families, that have lost their loved ones and suffered huge financial loss, complain that they are hit indiscriminately by the warring parties, the Taliban and the government. On one side, the Taliban use civilian houses as launching pad against government forces. They also plant landmines in routes used by the villagers, and construct tunnels. On the other side, the locals are hit by government mortar attacks and aerial bombings indiscriminately, too. Four brothers were living in our neighboring house. Once, after the brothers got out to go after their farm works, their wives and children gathered to have a joint breakfast around 10:00 AM. A mortar shell fired by government [forces] landed and killed the wives and children of the four brothers,” Baqi told of another deadly incident in his neighborhood.

According to Baqi, almost all of their villagers have been forced to flee their homes in recent violence between government forces and the Taliban. As he puts it, 33 families did live in Sulghai village. “All the families have fled except one or two families who cannot afford it,” he added.

Farid Ahmad Mashal, head of security at Kandahar Police Department, did not reject the accounts made by displaced families. Acknowledging some mistakes, he blamed the Taliban for the militants would start the war and then use the civilian houses as launch pad. The local security official went on to stress that they tried their utmost efforts to save civilian lives and conduct their airstrike with precision.

According to a research paper recently released by the Watson Institute for International and Public Affairs, the Afghan Air Force has increased its air strikes to increase its leverage in the ongoing peace talks with the Taliban. “As a consequence, the AAF is harming more Afghan civilians than at any time in its history,” the research paper noted. It further details that the AAF killed 86 Afghan civilians and injured 103 others in airstrikes during the first six months of 2020. “Between July and the end of September, the Afghan Air Force killed 70 civilians and 90 civilians were injured.”

With around 24,000 afghanis, Abdul Baqi has opened a retail shop in which he sells snacks like cheese puffs. Ghulam Farooq, his younger brother, is now working in a dairy house in return for a monthly 3,000 afghanis salary. In a part time job, Mirwais is working in a bakery in return for four breads. “Sometime we can find bread, but sometime cannot,” Abdul Baqi said with a deep pain and sigh.

This story has been developed by Etilaatroz’s Abdul Wahid Haidari and translated by Mokhtar Yasa.